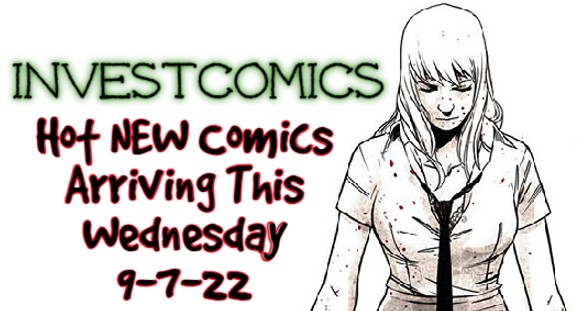 Here are this week’s top Trending/Speculative Comics out this Wednesday 9-7-22.
Please note: All new comic releases can and will change release dates from time to time. Check with your local comic shop on the guarantee of arrival time. If ordering from eBay, check with the seller or post details.
Like something we’re talking about? Like a cover? Like the debut of a new series? A first appearance?
Click on ALL Red-Highlighted LINKS/Comic Covers to BUY/BID from ALL available eBay sellers now (always buy from high-rated eBay sellers).

Alien Vol 2 #1 – It hasn’t been long at all since the first volume of Disney’s new franchise hit the comic book medium. We continuously say on here how we do not understand the constant restart of a title. Yes, the number one issue tag brings in more revenue, but in reality, from a perspective of a story or a series, it makes no sense. There are zero reasons not to continue the story from the original Alien series with a new arc in issue five or ten, or whatever. The number one issue is an obvious money grab and it’s silly. That all said and set aside, the creative team of Phillip Kennedy Johnson (writer) and Julius Ohta (artist) will definitely be one to check out. We cannot stress this enough, as we have time and time again. Any new Alien or Predator comic from Disney is a possible monster key issue in your collection. Anything that literally comes to life from the comic stories and hits the big screen when they decide to kick off their franchises in a big way will explode in the aftermarket. If an Alien or a Predator somehow crossovers into a Marvel film or even a Disney+ show, the very young, early Marvel comics will see movement. Stay on top of these books. Within these two franchises, Disney/Marvel are introducing new worlds, characters, and origins, that will most likely, eventually show up on the screen. Could you imagine having the character Ripley first show up in a comic book and then appear in all of those films? Yeah, that’s a big possibility here.
Black Panther #9 – The first appearance of The Colonialist. That could be them right on the cover featured here. Get that cover if you want a first appearance and first cover.
All-Out Avengers #1 – A new Avengers series. What’s not to love here?
E-Ratic Recharged #1 – We were extremely high on this character/book during its first run published by AWA. Created by writer/artist Kaare Andrews. He really killed it. It didn’t catch the way we thought it would, speculatively speaking (see we are wrong sometimes too!), but we are high on Kaare’s character no matter what. He presents the latest edition this Wednesday. We are “recharged” Mr. Andrews.
Spawn #333 – Heads up, a possible first appearance here.

Four Batman comics in this week’s Hot Picks. That’s a whole lot of Batman. Why doesn’t DC Comics space these releases out a bit? They are all different in their own way, so there’s that at least. If you’re an art fan in general and you like Lee Bermejo, you’ll love the idea behind Batman Dear Detective #1. It’s a collection of his cover art put together in a comic to tell a complete story. Batman #127 – The final battle between the newest Batman villain, Failsafe. Batman Knightwatch #1 – The first(?) appearance of the Knightwatch team. An all-ages Batman comic. Do these comic companies realize yet that kids are more interested in electronics, their phones, and games than they are comic books? Can we stop pretending that kids are actually reading and wanting to purchase comics? When is the last time you saw a kid in a comic store asking for the latest Spider-Man comic? Don’t @ us. Just a viable opinion. The last of the Batman comics to be released on Wednesday, Dark Knights Of Steel Tales From The Three Kingdoms #1.
Ninjettes #1 – A crazy cool new series from Dynamite Entertainment. We know it’ll be a good story because Fred Van Lente is on it. Art by Joseph Cooper.

X-Men And Moon Girl #1 – More Moon Girl number one comics. Remember, do not get swindled (purchasing her first appearance) with your hard-earned money on a “gut” about how she’s going to be the next big thing since sliced bread. One of the top worse speculation comics next to Squirrel Girl.
Moon Knight #15 and Captain America Sentinel Of Liberty #4 both feature variant Miracleman team-up covers.
Dark Crisis #4 – DC Comics says to “witness the birth of the new DC Multiverse” here.
Boogyman #1 – A new horror comic from Ablaze publishing. A fantastic premise here is about a little boy, Elliot, whose affection towards reading bogyman stories comes to fruition when his parents are killed by…..a boogeyman.