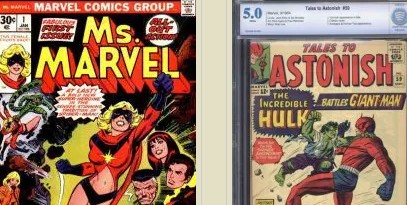 NOTE: The InvestComics site is BEST viewed on Google Chrome!

Every  week before new comic book day, here are the Top 5 NEW comics to speculate/read from this Wednesday. This list is pulled straight from the latest (weekly) InvestComics Hot Picks article.

Click on the RED links or comic cover to buy/bid right now.

Hot Picks Top 5 based on InvestComics Hot Picks #407 and new comics coming this Wednesday 1/20/16. Click the link to read the article now.

A quick reminder before moving on to this week’s Top 5 article.
On January 20th we will announce the winner of the signed/sketched blank cover The Chair from Peter Simeti. An absolutely beautiful piece of art here. Click HERE to get the details on how to enter.
Also we have the Walking Dead #150 giveaway ending in next week’s InvestComics Hot Picks #408. The giveaway includes FIVE Walking Dead signed comics from series artist Charlie Adlard. INCLUDED in the 5 is a sketch blank (also signed). Check out this giveaway right HERE. Enter today for both of these awesome giveaways.

Avenging Spider-Man #9 (2012) – The first appearance of Carol Danvers (Captain Marvel). This comic has cooled down since the announcement a long long time ago and far far away that Captain Marvel (Carol Danvers) will be making her debut on the big screen. Buy low…..

Captain Marvel #1 (2012) – The first Carol as Captain Marvel. Even though she’s right there on the cover of Avenging Spidey!

Here are the rest of the comics that appeared on this past week’s InvestComics Hot Picks #407 (Click the link to read now!)

Click the Red links (or comic covers) to buy/bid now if your comic shop is not able to hook you up!