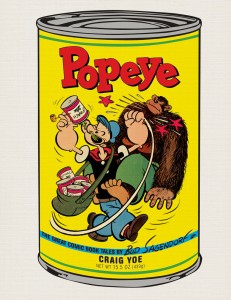 In POPEYE: THE GREAT COMIC BOOK STORIES OF BUD SAGENDORF, the world’s most famous One-Eyed Sailor is joined by the Sea Hag, Bluto, Olive Oyl and many other fan-favorite characters for some of his most thrilling and funny adventures. These reproduced stories from the 1940s and ’50s are beautifully edited, designed, and packaged by creator Yoe, who provides a profusely illustrated biography of Sagendorf with many rare photos and art, as is per usual with YOE Books. To top it off, POPEYE boasts an introduction from animation historian and producer Jerry Beck, whose personal body of work includes Looney Tunes, The Ultimate Visual Guide, and the 50 Greatest Cartoons.

Working with Popeye creator E.C. Segar, Sagendorf spent years studying the craft and successfully captured the wacky and unique qualities of the One-Eyed Sailor when he finally took the lead on the strip in 1959 and went on to become Popeye’s longest running cartoonist. The greatest expression of Sagendorf’s Popeye was the long form, wild, and free wheeling comic book stories. This full color book lovingly collects the best of those great tales.

POPEYE: THE GREAT COMIC BOOK STORIES OF BUD SAGENDORF is the latest book from the IDW imprint, YOE Books, edited and designed by Yoe, winner of both an Eisner Award and the Society of Illustrator’s Gold Medal. Coming next from YOE Books is Archie’s Mad House, and The Barks Bear Book will shortly follow. Vice Magazine has deemed Yoe “The Indiana Jones of Comics Historians.”

Yoe is available for interviews regarding this and other books, which can be seen at www.yoebooks.com.

Visit IDWPublishing.com  to learn more about the company and its top-selling books.

About IDW Publishing  IDW is an award-winning publisher of comic books, graphic novels and trade paperbacks, based in San Diego, California. Renowned for its diverse catalog of licensed and independent titles, IDW publishes some of the most successful and popular titles in the industry, including: Hasbro’s The Transformers and G.I. JOE, Paramount’s Star Trek; HBO’s True Blood; the BBC’s Doctor Who; Toho’s Godzilla; and comics and trade collections based on novels by worldwide bestselling author, James Patterson. IDW is also home to the Library of American Comics imprint, which publishes classic comic reprints; Yoe! Books, a partnership with Yoe! Studios; and is the print publisher for EA Comics and ComicMix.