First ever comics based on most infamous Star Trek™ villain!

First ever comics based on most infamous Star Trek™ villain San Diego, CA (July 24, 2010) – Today at 2010 Comic Con International: San Diego, IDW Publishing is proud to announce the first-ever comic series based on the ultimate Star Trek villain, Khan! Coming in October, this four-issue series answers the question that all Star Trek fans have been asking for decades: What happened to Khan and his followers on Ceti Alpha V? Star Trek: Khan: Ruling in Hell answers just that, explaining how this once proud warrior-king turns into the grizzled maniac seen in Star Trek II: Wrath of Khan. To celebrate this next phase in Khan canon, IDW is offering an exclusive plush doll, available only through select comic retail stores.

“Khan is the classic Star Trek villain, and the Tipton brothers have crafted a truly engrossing story, one that eloquently spans the gaps in Khan’s history and makes his story whole,” said editor Scott Dunbier.

When he first appeared in Star Trek’s episode “Space Seed,” Khan is an elegant, charming, and ambitious superhuman. After being marooned on an uninhabited planet by Captain Kirk for fifteen years, the Khan of Star Trek II is twisted by loss and driven to the ends of sanity by an unquenchable thirst for revenge. Available with the first issue of Star Trek: Khan: Ruling in Hell, IDW’s exclusive Khan plush captures the vengeful tyrant, complete with mysterious black glove. Fans interested in the plush should contact their local comic store retailer, or visit comicshoplocator.com. 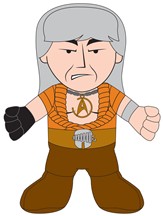 Star Trek: Khan: Ruling in Hell plush doll will be available at select comic retail stores in October. Ask your local retailer for pricing and availability, or visit comicshoplocator.com to find a store near you.