Big fan of The Walking Dead?

You’re about to get your chance, then!

PRESS RELEASE – THE WALKING DEAD FLIPS THE SOLD OUT CHEW #1 THIS JULY!

The fan-favorite undead meets the sold out cannibalistic clairvoyants in THE WALKING DEAD #63/CHEW #1 Flipbook!

7 July 2009 (Berkeley, CA) – CHEW’s sell-out sensations, writer John Layman and illustrator Rob Guillory, are teaming up with Image Comics veteran Robert Kirkman to bring their sold out first issue to the masses in a very special black and white full issue flipbook in the upcoming WALKING DEAD #63 at no additional charge!

"As a creator, there’s nothing more satisfying than hearing that a lot of people are interested in reading your book. The flip side of this is there’s nothing more frustrating than hearing how people can’t get a hold of your book to read," Layman said. "So, Image and Robert Kirkman concocted this great plan to put CHEW in a lot of people hands– and for the unbeatable low, low price of ‘free’."

CHEW’s star, Detective Tony Chu, is a cop with a secret. As a Cibopath, Detective Chu gets a psychic impression from whatever he eats. While it means he’s a hell of a Detective if he can stomach the evidence, once his secret gets out the government makes plans for him, whether he likes it or not. CHEW blends horror, mystery and the strangest ability of them all in an ongoing series of horrific crimes solved in the most horrific way possible.

Layman added, "If you’re remotely interested in seeing for yourself what all the CHEW buzz is about, this is your chance. Of course, the black & white preview does not do justice to Rob Guillory’s magnificent colors in the regular book, so if you like what you read in THE WALKING DEAD, you’ll have opportunity to buy third and second printings of issues #1 and #2 when #3 hits the stores on August 5th!" 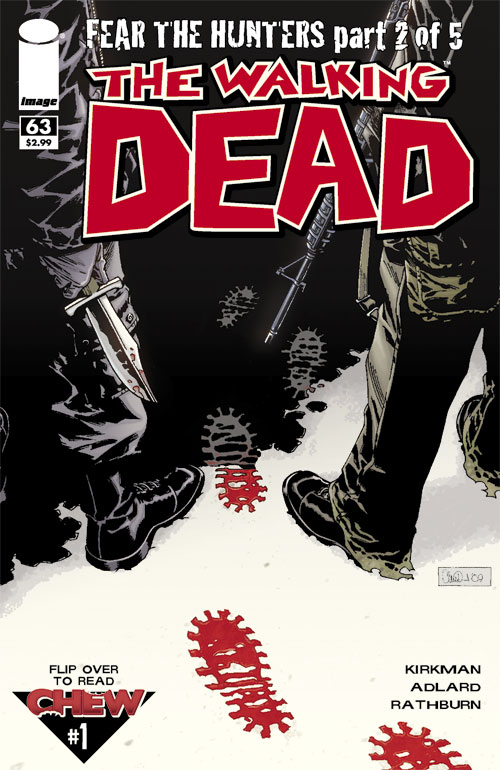