Bob Heske stops in from working behind the camera….and behind the scenes at InvestComics too!

Starting 2011 with Elf Love and Styx and Stone

I don’t usually do reviews – making a micro-budget movie, I simply don’t have the time. However, two intriguing items appeared in my inbox and well, what the heck … it was the holidays!

Huh? Elf Love? How am I – AKA Mr. Hack’ em, Slash ‘em Horror Guy – qualified to critique that subject? Let’s face it; my take on an elf love tale would be limited to 10 words: “Two elves enter a bar. They get lucky. The End.”

When I received an advance reader copy from a talented writer/artist friend, I decided to delve inside and – who knows, maybe it was the pixie dust? – but I became entranced.

The book, which was edited by Josie Brown, Rose Mambert & Bill Racicot and is published by Pink Narcissus Press, begins with a great dedication that really sets the tone for the entire collection:

“This book is dedicated to the memories of J.R.R. Tolkien and Gary Gygax … without whom no one would give a damn about elves.”

The book includes 20 tales with each of the editors submitting a tale and a few writers submitting multiple stories. Like any anthology, ELF LOVE has its shining stars and a few clunkers. But overall, this is a solid collection which embraces writers young (a senior in high school and a college student) and older (a few seasoned authors and members of academia).

Make no mistake – this is not “Fabio” Elf Love. The stories range from comedic to pulp fiction to detective noir to futuristic to tragically demure to downright dark and decadent. In other words, elfin good fun!

The best of the lot was “Goodnight, My Lady”, penned by Duncan Eagleson and inspired by Raymond Chandler’s “Farewell, My Lovely” wherein hardboiled detective Philip Marlowe (played by Humphrey Bogart in The Big Sleep) is hot on the trail of the vanished lover of a dangerous ex-con. I won’t tell you how Duncan wove in the elf love aspect, but trust me that he did so masterfully. Although it is a 35-page short story, the pages fly by fast and the story goes down like a shot of Hennessy Cognac. Very smooth! Duncan also wrote “Reclaiming the King” which takes place in 1977, riffs a bit on Elvis Presley, and has a nice little twist at the end about an elf who has grown accustomed to his comfortable existence in the human world.

The tireless Eagleson also contributed the book’s cover art and drew the only graphic tale in the anthology, called “Of Roots and Rings” (a fantasy story ably written by Sarah Eaton). Being a comic-kind-of-guy, I turned to the graphic story first, devoured that, and then flipped back and forth among the other stories.

Other winners in the collection include “Tidings of Comfort and Joy” by Josie Brown which explores how one woman copes with the pain of living in the cruel human world after the horrible murder of her elfin lover; “(S)elf Love”, a sardonic and entertaining tale of elf masterbation by Rose Mambert; and “A Long Friday”, a brutal tale about an elf interrogation and beat-down by two short-fused cops who want to go home, expertly crafted by David Vernaglia.

Other tales worthy of note included “Xenium” by Michael Takeda which is about an elf ambassador who is sent to spend some time “to know thy enemy” with a warring faction called the Cardominians and their leader, the Saban. Michael does an outstanding job of inventing and injecting a new language in the story which shows that we are all different, but not so different in the end – with the great connector being “elf love”. It’s a story you need to read to appreciate, and then read again.

Jon Bishop delivered a concise, funny and geeky-hip story called “David & Gerty” about a gamer and the “woman of his online dreams” who decide to meet in person and survive a very awkward encounter a pizza emporium. Can their relationship survive, untethered, in the virtual world?

Finally, “Feather Fall” by Australian poet/fantasy writer Joanna Fay provided a fitting conclusion with a Romeo and Juliet-esque parable about two lovers from opposite sides of the track that meet, fall in love, and are made to suffer for it.

CONCLUSION: Don’t let the title fool you; Elf Love is as diverse, exciting, humbling, hurtful and worthy of literary exploration than human love. My only suggestion: try to inject more artwork; perhaps an illustration as a “title page” for each story. These are elves, after all and any visual aids will enhance the fantasy story. Otherwise, this is a solid anthology and well worth checking out.

Although Bluewater Productions has created its own niche with celeberity bio comics, they are also starting to make headway into horror. Bluewater’s “Vincent Price Presents” has already brough a horror fanbase to the company. When “Styx and Stone” hits the stands this month, it’s sure to bring its own fans – thanks to the strong story-telling and crisp dialog of co-writers Adam Gragg and Bluewater Principal Darren Davis, and eye-catching sequential art of Matias Balsa and Stefano Cardoselli. I don’t usually mention letterers, but Jaymes Reed does a kick-ass job of boxing and breaking out a considerable amount of narrative, and does a nice effect to capture the voice of the demonic James Wyatt inside Melvyn Stone’s head. Balsa and Willie Jimenez do a nice job of creating a pulp fiction color palette that adds dimension and depth to the artwork and story. In short, it’s a great team and they’re totally in sync throughout. 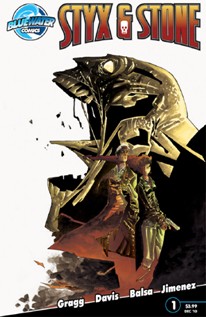 “Upon returning from South Africa, Detective Mel Stone was put on medical leave after he was found almost dead on the cargo ship he was on with no explanation and almost no memory of what happened to him. Now, he’s back on the force with his new partner investigating a string of gruesome campus murders. On the surface, everything is back to normal, but in reality, Stone is back with an added bonus; he’s sharing his body with the career criminal and murderer James Wyatt.”

Issue one starts like every horror epic should – with our protagonist (Detective Mel Stone) waking from a bad dream, and facing his real-life nightmare, mega-demon who has a stronghold on his mind. The unlikely duo are off to explore another crime scene, this one the grisly murder of a college jock/pretty boy with his eyes ripped out.

Hottie detective Claire Sanchez greets Stone and, as they explore the aftermath of the murder “nobody witnessed”, the malevolent Wyatt slings colorful sexual commentary inside Stone’s head as Mel tries to repress his burning attraction.

The only lead in the case is some video of Mario Esteban, a football teammate of the victim (Seth) seen leaving the dorm room in a bit of a huff. Stone and Sanchez grill the kid who doesn’t come across as a killer, but appears to be hiding something.

Sanchez goes to the morgue to get more details from the coroner who happens to be an old flame. He tells her that the pretty boy was probably drugged with a muscle relaxant that paralized 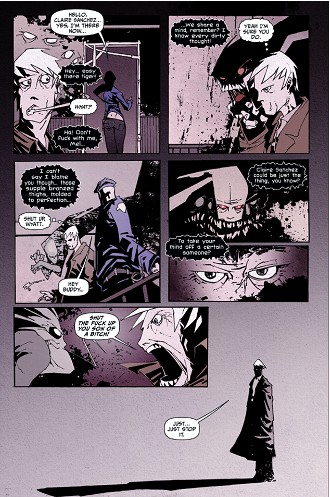 him and then had his eyes excised, leaving him in excruciating pain and likely cause heart failure (or something along those lines!). Then he proceeds to make a move on Claire, and is quickly and forcibly rejected.

Meanwhile, Wyatt takes Stone to an alternate reality – Styx – where some very strange shit goes down that lets us know he’s battling a ticking timebomb of sorts partnering with Wyatt. The crux of his dilemma: since his soul joined forces with Wyatt, his “good” has neutralized Wyatt’s “bad” – meaning Hades can’t have Wyatt without getting Stone out of the picture.

He wakes up at his desk to Claire’s comforting touch.

Was Stone just dreaming, or …? I think you get the picture – that burning inside his stomach isn’t an ulcer, it’s the fire of Hell waiting to burn him out.

Back to the present –

Claire (Sanchez) tells Mel (Stone) that they have the profile of pretty boy/jocko’s killer – either a doctor or a 4th-year med student.

Mario Esteban is a 2nd-year med student specializing in surgery – could he still be a suspect? (Note – who knew that med students had time to play on the football team? Sounds like a weak link in the story to me…)

And another reveal – the victim’s body had semen all over it. So Seth had sex before his murder. But was the semen his own?

Let me just stop there. The story continues with an interesting beat with Stone and Wyatt almost having a convergence of their minds, knowing they have to work together to overcome the threat of Styx that wants them both.

The ending of issue one is as you’d expect for a high octane, high gore horror/action/thriller. In short, it ends with a cliffhanger – another gruesome murder on campus and a great visual (splash page) to leave us licking our chops and shaking with anticipation until the issue two hits the stands.

CONCLUSION: No real weaknesses in this initial offering of Styx & Stone. Once again, Bluewater Productions swings for the fences and appears ready to hit a homerun. This could be 2011’s “CHEW”. Engrossing, entertaining, and eminently readable. Pick up issue one from your favorite comic store after it releases on January 6th 2011, and you’ll be hooked!