Harken Horror fans, there is a new horror website in town. And if you haven’t yet stumbled upon Ravenous Monster, you’re missing out on some eloquent, insightful writing and some bloody good fun. As Webzine Cryptkeeper Jason Thorson writes on the site, “This decrepit little corner of the web will cover the scary stuff from every angle, offering commentary, criticism, analysis, and information about our beloved and blasphemous genre.” I’m all in! Read on to get inside the head of the “Other Jason”, but tread carefully – it’s a dark, insidious place full of chills, thrills and blood spills. Enjoy! 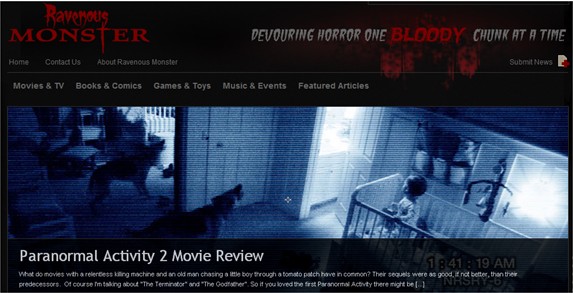 1. Tell us about Ravenous Monster. It’s a webzine that covers the gamut of horror, with a bent toward indie. How do you collect your material and what inspired you to take this on?

(JT:) RavenousMonster.com is a horror webzine and it’s probably weighted a bit toward movies right now, as that’s my area of expertise. I’m a writer myself, complete with the formal know-how and a couple of expensive college wall hangings to back me up. I’m still paying a monthly chunk of change for those. I’m also a huge horror fan.

Covering the horror genre dictates that I cover independent artists because the two are inseparable.

The horror genre, particularly horror film, has always been on the very leading edge of the storytelling blade. It’s truly the Wild West of filmmaking. Very few resources are required to tell a scary story via the camera. In many instances, horror filmmakers do things either because they don’t know any better or they have to creatively overcome said lack of resources, including (in some cases) a lack of formal knowledge.

Sometimes this results in brilliant new ways to tell a story on film, new techniques, and new movie trends in general, that eventually show up in mainstream movies. More often it results in a lot of poorly written and poorly acted horror movies as those are the two areas most affected by the lack of tried and true technique.

I’m constantly trying to reconcile the genre’s weaknesses with its strengths, looking for those relatively rare examples of brilliant horror. I want to expose the very best the genre has to offer, and discuss the failings of bad horror. My goal is for Ravenous Monster to help hold the genre’s feet to the fire. Having said all that, I like a lot of bad movies, but I’m honest about their merits.

2. Are you a one-man show, or do you have other contributors?

(JT:) I currently have two other contributors and there have been a handful of people who’ve contacted me about doing some writing. I’m always looking for more like-minded horror fans who’d like to share their insights. For anyone who’s interested, all that’s required is that you have some writing chops and a passion for horror. You can contact me via the “Contact Us” link on RavenousMonster.com.

(JT:) The traffic’s been decent. I’ve never been known for my patience so I want everyone to visit my site all at once, every day, all the time.  But it’s been good so far. A lot of work went into the development of the site, beginning in May of 2010. The goal was to launch in October, but things fell behind. My friend, Brian Orcutt of CuttDesign.com picked my brain and designed the look of the site accordingly. He did it as a favor after I helped him with some marketing for his own site and some sites 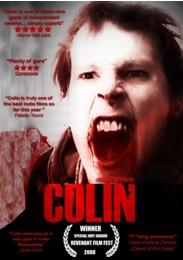 he’s designed for his clients. So obviously, I was OK with my site sitting low on the priority list since I wasn’t paying cold hard cash.

4. What are your top 10 indie horror films of all time (budgets of $5 million or less)?

(JT:) Honestly, I make a habit of avoiding lists, both other peoples’ and my own. There are hundreds of horror movies released every year so listing the very best ten ever is difficult. But I do think there are some incredibly important films that’d have to be included on any best-of list such as “The Texas Chainsaw Massacre”, “Night of the Living Dead”, and “The Evil Dead”.  I’m also a fan of “Deranged” and “Maniac”. More recently, I’ve enjoyed “Jack Brooks: Monster Slayer” and “Murder Loves Killers Too”. The ultimate indie success story has to be the zombie flick, “Colin” which cost the equivalent of $70.00 to make and blew up at Cannes a couple years ago. And my favorite genre flick of 2010 was “Monsters” which does a hell of a lot for about $15,000.00. It’s a great movie.

5. If you found yourself trapped in a movie, which horror monster (creature or man) would you want to massacre you?

(JT:)  I’d say Bruce. It’d be the finale to what I assume would be an adventure on the high seas to go out Captain Quint-style, getting devoured by a giant Great White shark.

(JT:) I reviewed “Monsters” last year and I liked it quite a bit. “True Grit” was great as well. The latter is obviously not horror, but neither is “Monsters”, really. I think the Buffy comics have remained strong all year and I enjoyed the Avatar Press stuff – check out their titles if you’re not familiar with them. The best game of 2010 is hands down “Red Dead Redemption”, plus the downloadable content, “Undead Nightmare” is better than most other stand alone horror games. You can’t beat zombies in the old west.  The best band of 2010 would have to be Phobia – old school American Grindcore. “Unrelenting” is a ridiculous album. Honorable mention goes to Cee Lo Green because the single,” Fuck You” from “The Lady Killer” album is brilliant in every way.

7. You also are a screenwriter and have done reviews for drivethrucomics.com. Tell us about these other endeavors.

(JT:) I’m a screenwriter insofar as I paid money to learn the form, among others. But I’ve spent a great deal more time since my college days critiquing actual screenwriters rather than writing my own screenplays. I do still dabble in fiction, but nothing substantial for the time being.

Matt McElroy, the public relations and marketing manager at Drivethrucomics, is a friend of mine.  He’s also based out of Madison, WI and he runs a horror and dark fantasy webzine called FlamesRising.com that’s geared toward RPGs and small press publications. I’m a regular contributor to Flames, mainly covering movies and comics and I’m a featured reviewer at Drivethrucomics.  When time permits, I read and review random titles that are sold at DTC, all of which are digital.  It’s a pretty groundbreaking approach to selling comics and graphic novels, and it’s been fun to be a part of it.

8. Does your girlfriend have a horror fetish too, or does she just think you’re twisted?

(JT:) Actually, I’m married to a wonderful woman, Jessica, who does in fact think I’m twisted. She’s not as into horror as I am, but she does love Buffy, Angel, True Blood, and a bunch of other more accessible genre stuff. And she accompanies me to the theatre for “dates” where we watch horror flicks, usually of my choosing. So she’s supportive and patient and I can only be considered lucky.

9. Come on … is Twilight really a horror film? 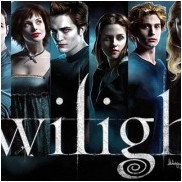 (JT:) Absolutely not. Its Y.A. fantasy and it’s not very well done.  Although, it’s certainly successful.  But I’d argue that “The Walking Dead” isn’t horror either. That show follows the approach of the comics in which the immediate forces of antagonism aren’t zombies. The zombie apocalypse merely provides a backdrop for a character drama in which the real antagonists are the living, not the dead. It takes the long view of what it would be like to survive this scenario, what would happen to relationships, families, etc.  And as such, it’s not horror nor is it intending to be.  And I feel like it’s working pretty well. The issue, though, is that it’s obvious how AMC has to market the show, so people tuning in for a zombie melee are disappointed. I totally get that. It’s proof that horror is an attitude and not much else.  Ravenous Monster contributor, Hunter C. Eden wrote a unique piece exploring this issue, called “Is it Horror?”

10. Does old school horror still scare you, or do modern films filled with special effects and gore reign supreme? What do you feel was the “golden age” of horror?

(JT:) At this point, not a lot scares me, but I can discern whether or not a story is frightening. I think scary films can come from any era. The golden era for me would have to be the first two decades of what I consider the modern era of horror films, so from 1968-1988. I think this era contains the most groundbreaking and trend setting movies in the genre’s history.

11. What is the scariest scene you’ve seen in a film? And the most gruesome murder? 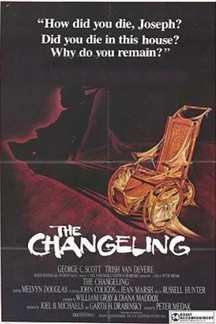 (JT:) There are a couple scenes that I like a lot.  One scene is from “The Changeling”, the George C. Scott movie from 1980. I haven’t seen this film in about 20 years, but it scared the crap out of me.  It’s a haunted house flick and at one point an old wheel chair in the attic of a mansion chases a woman down two sets of stairs, crashing and coming to rest in the foyer. It doesn’t sound like much, but in context it’ll send chills up your back. That entire movie is freaky.

I also enjoy the entire third act of “The Texas Chainsaw Massacre”, starting when Leatherface jumps out in front of Franklin and simultaneously fires up the saw. The subsequent chase of Sally through the woods and the dinner scene are awesome. Not necessarily scary, but I love the intensity.

There are so many gross scenes. No single scene really sticks out. You’d have to look at Tom Savini’s body of work in the early to mid 80’s, typified by the scene in “Day of the Dead” in which Captain Rhodes is ripped apart by the zombies. The Italian output from the late 70’s and early 80’s had plenty of nastiness too.

12. What film or horror comic that we have not heard about should we definitely check out?

(JT:)  I would say that if you’re really seeking the very best horror films being made, then look no further than the output of the French. “Martyrs”, though technically French-Canadian, is an unbelievably disturbing film and it explores profound metaphysical issues as well as social ones. The French films “Inside” and “Frontiere(s)” are also pretty incredible. “Let the Right One in” from Sweden is a stunning movie and among the best movies made in 2008, regardless of genre.

What’s happening is that hardcore horror movies are being made in countries that had previously obstructed the existence of such films. In America, the horror film has been deemed disposable by studios. They’re made by inexperienced and inexpensive filmmakers – music video and TV commercial directors and the like – and they’re aimed at teenagers with the intent of making a profit on opening weekend with little regard for what happens after that. In Europe, Spain, Scandinavia, and some of these other areas, horror films are  being made by serious filmmakers for the consumption by serious film goers and the results have been outstanding over the last few years.

13. Thirteen seems to be a good number to end this interview on. How can people submit stories and content to you? And please do pimp whatever your websites and whatever else you are working on.

Thanks Jason. Ravenous Monster is a great webzine and I encourage our readers to add it to their Favorites list. And for our reader/writers – please do contact Jason if you are a horror fanatic and want to contribute.