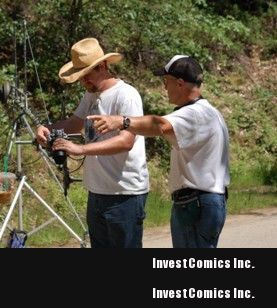 budget thriller STRICKEN. Since that time, Matt hasn’t been sitting on his numerous “official selection” film festival wreath laurels. Nosirree. Matt and his inventor savant father Gary (film DNA runs in the family, and these guys are an incredible tandem) have been busying launching their next film − a comedy that promises to delivery big belly laughs and potential bigger returns for investors who climb along for the hilarious ride.

When you listen to father (Gary)/son (Matt) talk about their film, the enthusiasm is infectious. Read all about the fun they’re having and find out how you can partake in the frivolity. Also, enjoy the smattering of on-location stills which are fresh from THE PARK in production this past week …

1.  THE PARK − a zany tale about a group of travelers who descend upon a Park to witness a final 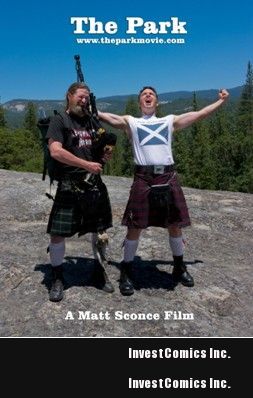 Firefall − is a 180 degree departure from your last film, STRICKEN. What stirred you to go from horror thriller to madcap comedy?

(MATT:) We are first and foremost storytellers. We want to tell stories that will make people stand up and cheer and inspire them. Genre does not matter to us. If we write a story that fits the mold, we will tell it.

(GARY:) Entertaining moviegoers to the best of our ability is our ultimate goal and we never want to be locked into one or another genre. THE PARK is purposefully a change away from our thriller STRICKEN, with the hope of making the watcher forget any pressures and troubles and just have a gut-busting good time.

2.  You co-wrote the script with your father, Gary. Tell us about the story. And by the way, who’s funnier − Father or Son?

(MATT:) Gary wrote the script and along the way, we brainstormed about scenes and characters and plot lines. When he finished the first draft, I remember laughing so hard, I hurt my throat.  He is a funny, funny guy…but I may be funnier looking…

(GARY:)  I don’t know about who is funnier looking… (Laughs) We brainstormed this concept on a long drive. We thought up scenes and characters and laughed about them until we cried. We have three more comedies in the works, one a zombie film, one a romantic comedy, and one a hilarious musical. 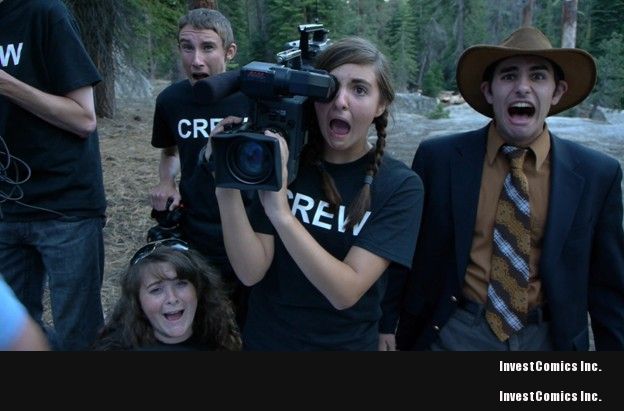 3.  You’ve set up a page on indiegogo (http://www.indiegogo.com/The-Park)  for people who would like to contribute, get some cool movie swag, and even potentially get an Associate Producer credit. Give us three good reasons why we should contribute to this project.

(MATT:) The first reason is that we make epic things that get out there into the world. Our films get distribution and are seen by millions. The second reason is that THE PARK is destined to be a cult classic and is one of the funniest movies you will ever see. Get on board on the ground floor now! The third reason is that becoming part of something big feels great. Feel awesome and get involved!

(GARY:) We completely trust our instincts and the quality of our product. THE PARK is relentless in the comedic antics of the deep, round characters. It has songs, dance, action and tons of funny physical comedy. Remember how many lines you remember from movies such as THE PRINCESS BRIDE or MONTY PYTHON AND THE HOLY GRAIL?

Imagine seeing THE PARK years from now, and then showing your friends your name in the credits at the end!  You will feel maximum awesomeness!

4.  How did you find the location? Did you have to get permits or is this more of a guerrilla film?

(MATT:) We are filming all over the forest and a bit in Yosemite. I grew up here and so the locations are my old stomping grounds. We live in an area that looks like Yosemite and so everywhere we point the camera is “The Park”.  We have gotten permits to film in certain places and are going guerilla in others.

(GARY:)  Most of the film will be shot with permission on private property in the Sierra Nevada mountains of California. We have put time into scouting the perfect locations for each scene. Matt and I have made many trips into the back country. 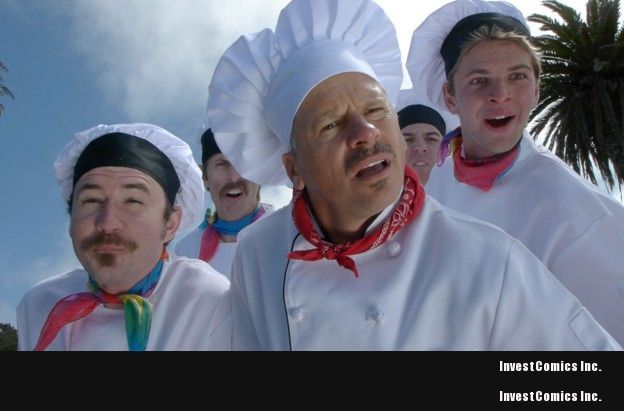 (MATT:) Well, the budget on THE PARK will be MUCH less than that. The secret is passion, preparation, and absolute tenacity sprinkled with some talent. You dive in headfirst, never quit and never settle. As long as you have a great story and have prepared well, the rest will follow. Also, when you are honest and create great stories, people will want to be involved.

(GARY:) We can make a film for micro costs because we are blessed to be involved with many dedicated and talented people who are committed to the project as a family.  Also, it helps so much to have a Matt Sconce, who is a genius directing behind the camera, an Emmy nominated editor and award-winning movie maker.  Because he knows exactly what he wants in each shot, our shoot times are short and his concise direction/script management plays out into lower costs. 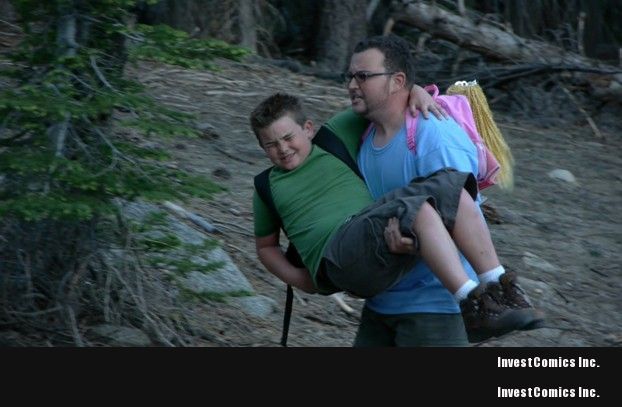 6.  Your script seems like it would be tons of fun for actors. And you have quite a diverse ensemble cast in the film. Tell us about the casting process, and who was your Casting Director?

(MATT:)  Carollyn De Vore of De Vore Talent was our casting director. We held auditions for one day at her studio in Fresno and had over 108 people audition from the Fresno and Mountain Areas as well, as Canada and LA through video auditions.

7.  Who are some of the actors that you have attached that we either already know or should be on the lookout for?

(MATT:)  Our cast is RIDICULOUSLY good and AMAZINGLY skilled at comedy. Each actor in this ensemble cast is someone who is going to explode into the comedy film scene after this movie. When you watch this movie, you will see some of the future leads of the next 20 years of comedy feature films. They are fresh faces that bring a prowess and invigorating newness to the repetitious comedies being released today. 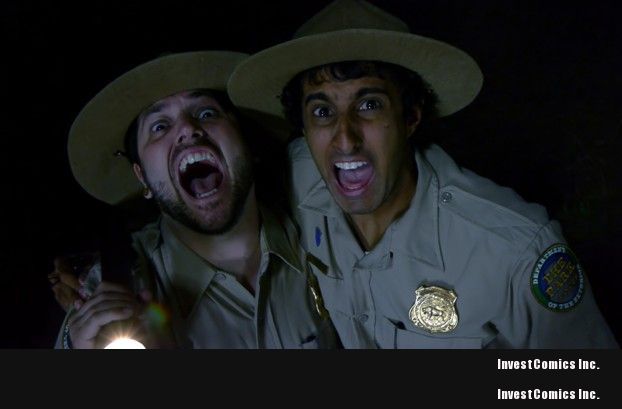 8.  Gary, tell us why your son is such a great director and post-production whiz. Matt, tell us about your mechanical-savant father and his make-you-laugh-out-loud screenwriting ability.

(MATT:)  Other people have money…we have a Gary. My dad is an amazingly creative and technically skilled man. He can design and build just about anything and can do it quickly. He makes equipment we need from scraps of metal laying around the house and can see in 3D in his mind so he can build sets and equipment that is unable to be purchased like his groundbreaking and patent pending “Spin Rig” just used by Icon Films for an animal planet special. We are still looking for someone who wants to take it to the next level and make money on this amazing invention. Watch it here: http://www.vimeo.com/10814678

(GARY:)  Matt has always been a genius. I know that is easy for a father to say, but in his case it is true. He sees the whole movie in color and 3D in his mind, each scene playing out perfectly in his head before a single frame is shot. He knows how the acting will be necessary in each scene to play well. He sees the order of the edit before we shoot. I know to completely trust his gut feeling about any scene, including blocking, framing, background and acting.

9.  When are you going to shoot the film? What can we do to help you meet your funding goal?

(MATT:) We are halfway through our production as I type this. We are trying desperately to raise the money for post production sound, VFX and the real Alaskan Brown Bears and Cougars that will be seen in the movie. If each person could check out our indiegogo site at http://www.indiegogo.com/The-Park (or type “www.makethepark.com” into your web browser)  and just contribute $10 (more is great, of course) then we may reach our goal. Every little bit helps us make this movie right. So far, what we have is GOLD. This is everything we hoped it would be. Please check it out and help us make it better.

(GARY:)  We have nine more days of production, and then a few pick up shots we thought about. We will have SAG costs and post costs too. Any help anyone can give would be appreciated and would be remembered in a tremendous comedic masterpiece.  One person, with $10K Executive Producer credit, could possibly make 10 times their investment, and gain entrance into the world of producing profitable films, possibly working with us in future projects too. 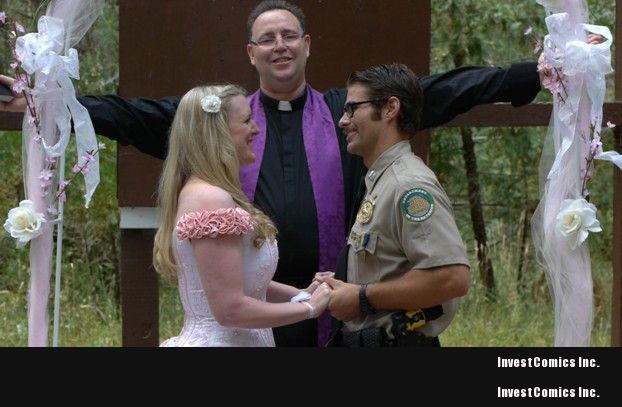 10.  What are your plans for distribution? Will you be doing the festival circuit? If so, have you pre-selected any film festivals you want to attend?

(MATT:) We will absolutely be attending my favorite festival the Action on Film International Film Festival in Pasadena, But we are also aiming for Wide Scale Theatrical release. This movie is so funny and has such a broad appeal, we believe many people will want to be the ones to cash in on what it will make at the box office.

11.  You’ve done horror, you’ve done comedy … what’s next for the Sconce filmmaker family?  Any projects in production we should be on the lookout for?

(MATT:)  We have a drama/mystery in the hands of a VERY A-LIST actor right now and expect to hear back soon.  The movie is “Magic” and you can see more about it here: http://www.magic-the-movie-com.

After that, we have many other stories − fantasy/action, sci-fi/action, comedy/action, period pieces, sci-fi/thrillers, romantic comedies, and many more. Whatever we make will be made with honesty, integrity and be told and shot well so it will make you want to stand up and cheer!

(GARY:)  Matt has written the drama MAGIC, and it was recently awarded “Best Feature Script of the Year” at the off year American International Film Festival awards. We have had people read the script and call us immediately crying after they read it. We have a finished script, NODES, a big budget science fiction thriller, and we are working on two other scripts. Making films that have wide family-friendly, audience appeal, are tremendously entertaining, and are also profitable for investors is our passion.

Thank you, gentlemen, for taking time from shooting your film to give us an update. Hopefully we can help spread the word to elevate your film from “gold” to “titanium”. We look forward to seeing it and laughing our heads off. Cheers!