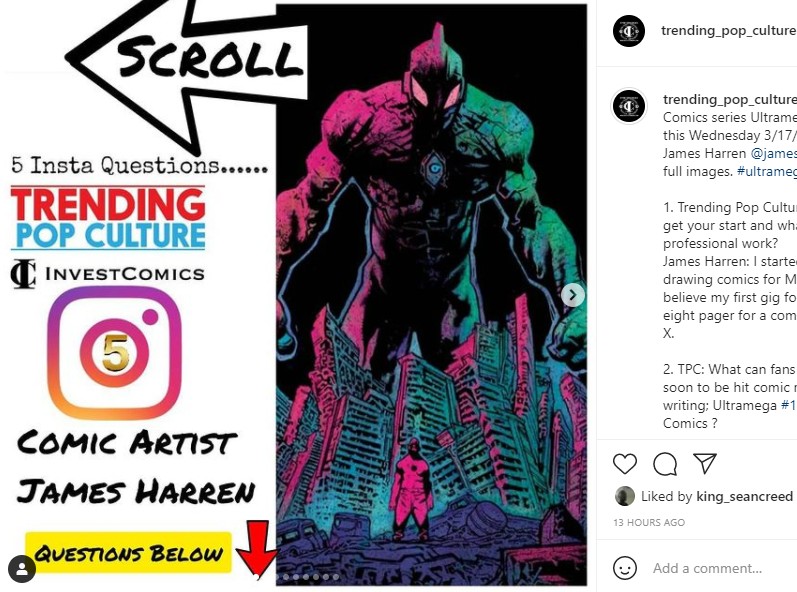 Visit our Instagram page at trending_pop_culture and scroll through all of the awesome images.
Buy the NEW comic coming on Wednesday; Ultramega #1. Creators @jamesharrenart and @dragonmnky

1. Trending Pop Culture: When did you get your start and what was your first professional work?
James Harren: I started professionally drawing comics for Marvel in 2009. I believe my first gig for them was an eight pager for a comic called Nation X.

2. TPC: What can fans expect from the soon to be hit comic release you’re writing; Ultramega #1 from Image Comics ?
JH: A strange and dark world where giant, colorful karate men fight even more giant, despicable monsters.

3. TPC: What’s your favorite app?
JH: Since the social media apps were designed by demented luciferian baby-eaters, I’ll say Spotify. I like Spotify.

4. TPC: What character would you love to tackle and really add your vision to?
JH: I have a special place in my heart for the Jack Kirby created DC characters like OMAC, Kamandi, the Demon, and the New Gods. Particularly the Demon. Jack Kirby mixed with ancient folklore and horror is a wonderful thing.

5. TPC: 60 page Ultramega #1, that’s amazing. It’s rare fans get this in a debut issue. What was your idea behind giving so much to fans up front?

JH: They deserve it.