Skip to content
Terry Hoknes of www.HoknesComics.com spoke with creator Amanda Raymond about the new comic book Legion of Molly Doves published by Bliss OnTap Comics which came out just a few weeks ago and has now sold out worldwide and features art by legendary comics artist Alex Nino. 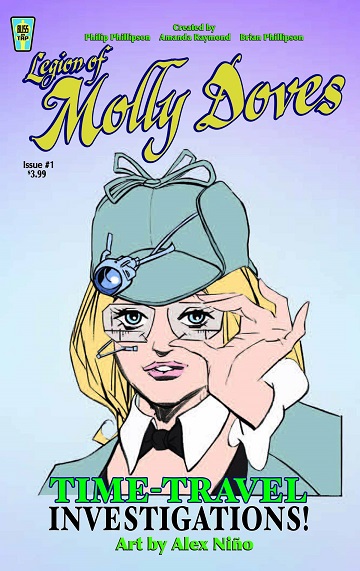 1 – Tell me about this new series, the character, the plot

The Legion of Molly Doves’ main protagonist is the gifted Time Travel Academy student, Molly Dove, who is the daughter of James Dove, the inventor of the first time machine. It is the 23rd century, and their society is crumbling. Molly’s father had partnered with Julius Faraday, a ruthless and shrewd businessman who is also Molly’s grandfather, and together they had planned to use the time machine as a public utility, to help solve their world’s problems. The machine was used before it was ready, which resulted in a deadly accident, and the city’s senators threaten to shut the machine and the Time Travel Academy down. As James scrambles to fix the problem, Julius grows impatient, and secretly sends a team of Academy cadets through time as a test, but they weren’t ready, nor were they properly trained yet. It results is a disaster, and as Molly tries to investigate, she’s pushed through time and winds up going to the past. Upon her return, she learns that her father has been murdered, and the Academy is being closed. With the help of her two closest friends, Octavia and Emma, Molly vows to hunt down the culprit, and also, to save her father’s lifework from being destroyed.

Alex Nino first started at DC comics in 1971. He then went on to become a fixture in the comic book world working for all of the major companies, DC, Marvel, Warren, Heavy Metal, Gold Key, and Byron Preiss. Some of the titles that he has worked on were, Weird Heroes, Captain Fear, Batman, Star Clusters, Conan the Barbarian, God the Dyslexic Dog, and his own book, Satan’s Tears.

He then made it over to Walt Disney Feature working in development. Alex helped to design Mulan, Treasure Planet, Tarzan, and Atlantis.

Amanda Raymond studied English and creative writing at Syracuse University, has written a historical fiction novel called Before the Strand (which is currently being shopped by her agent), and also wrote several screenplays.

Philip Phillipson has spent the last 20 years at Walt Disney Feature, and 20 years in TV Animation before that. Credits include 20 Theatrical films, 14 from Disney. Some of the Disney films were, Little Mermaid, Lion King, Beauty and the Beast, Aladdin, Rocketeer, Tarzan, and Pocahontas. He has also worked at Ralph Bakshi, Hanna Barbera, Marvel, Universal, Warner Bros.

Brain Phillipson got his start in animation working at MTV on Celebrity Death Match, Daria, then moved on to King of the Hill and Futurama, among others. Brian’s comic book work also includes being the creator of God the Dyslexic Dog, Andie and the Alien, Monster Candy and his newest work, Future Proof.

3 – What are the future plans for the series – run of issues? mini-series?

We’re working on a graphic novel for the story which will debut at Comic Con 2014, produced by Bliss on Tap Publishing.

4 – Have the characters or concept appeared anywhere before this issue?

No, these are completely original characters.

5 – Do you have print run information yet on how many copies were sold through Diamond and/or from the printers?

While we don’t share our sales figures publicly, we’ve been happy with the Diamond orders so far and the comic will be available in hundreds of comic shops across the country (and available to special-order from any comic book store through the Diamond catalog). (Update: Now appears to be sold out at Diamond!)

6 – Where can comic fans purchase copies direct from the creators? Is there any other promo materials available – autographs, posters, limited promo comics etc.?

The best way to purchase the book would be at our booth at any convention we are attending. After that, the easiest place is at your local comic book store, if they are currently out of stock, they can back order. We will also be available with digital downloads through ‘Drive Thru Comics” in about two weeks.

We will also be in available in Comixology & through Blissontap.blogspot.com in approximately 6 months (after the initial run in comic book stores). Also available currently at www.HoknesComics.com