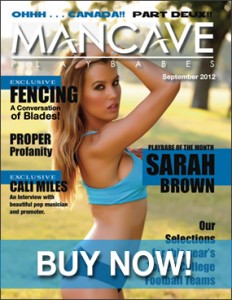 (Miami, Florida; September 3, 2012) – Comic book and entertainment information website InvestComics is proud to announce a partnership with the high quality magazine “Mancave Playbabes” and will be their exclusive source for the comic book entertainment genre. “I remember buying Maxim magazine years ago and discontinued my subscription because of the lack of quality within the material of the magazine.” said Jay Katz, President of InvestComics. “Mancave Playbabes brings back the quality of good reading material with spectacular visuals of beautiful women from the most talented and world known photographers in the world. This magazine is superior. It will be the most talked about magazine on the market by next year. This partnership will have rippling effects for the entire InvestComics family and bring the comic industry to Mancave Playbabes magazine for all readers.”

Sid Siddiqui, Editor in Chief, added, “Comic books are one of the major components of the entertainment market today and we were seeking a reliable comic book source to help us on this endeavor to add to our magazine. Jay Katz has a vision, his ideas are unmatched, and his comic book knowledge as his InvestComics website presence is a quality that we fully endorse. He will be our comic book industry consultant.”

“Plans for the future are very promising regarding InvestComics and Mancave Playbabes’ presence at Comic Book Conventions.”, said Jay Katz. “When we arrive to the shows, everyone will be talking about our booth; you will know that we are there! Sid Siddiqui brings his expertise and his team to the table with nothing in mind, but success and top quality.” 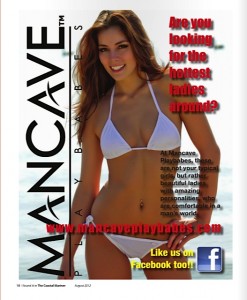 Look for more news coming from the InvestComics/Mancave Playbabes camp as to where they will be appearing within the Comic Book Convention scene.

With 14 year experience of Wall Street trading behind him, Jay Katz started InvestComics as a magazine in 2006; the first issue wasn’t released until June of 2007. The magazine was distributed as a free comic book Investment Guide throughout local comic shops in South Florida. It was also a giveaway on EBay for any winning bid to receive with their order.

Although the InvestComics website was on line in 2005, it wasn’t until 2007 the web site became the main focal point and the magazine ceased. InvestComics wanted to start reaching a broader audience and began to rapidly expand. InvestComics became the “Entertainment” Investment Guide as a result of covering many areas in the industry, focusing on entertainment as well as highlighting investment opportunities. The launch of InvestComics TV (ICTV) has made the site multi-media, attracting some of the biggest names in the industry (Stan Lee, Jim Starlin, Neal Adams) to appear in a split-screen 10-12 minute interview format. InvestComics website was the first to carry interviews in this format and remains an innovator for other comic book websites. InvestComics became Incorporated in 2010.

With a mission to recall the days of glamour, Mancave Playbabes brings the perfect lifestyle to your fingertips. Combining the charm of the man’s world and the alluring pleasures of entertainment, Mancave Playbabes has a unique approach to refuge, here you will find all your advice, style, and of course, beautiful girls.

At Mancave Playbabes, these are not your typical girls, but rather beautiful babes with amazing personalities, who are comfortable in a man’s world. Mancave Playbabes will bring you inside their not so typical lives. These models not only walk the runways, but also spin records, know their way around a baseball diamond, and drive fast! Find out what makes them tick, their passions, and turn-on’s. Warning: You will be hooked in no time. Inside Mancave Playbabes you will be granted access to their lives through in depth interactive interviews, chats, and VIP party invites! Like any Mancave, there needs to be a centerpiece, and here is no different so join us as we present the Mancave Playbabe, a monthly featured babe guaranteed to turn you on.

In addition to the girls, Mancave Playbabes is your one stop shop for all your favorite sports, health and fitness, style tips, humor, gaming, reviews, and pop culture needs. Remember when writing was captivating and enjoyable? You can breathe a sigh of relief, this type of writing has returned. A gateway to every man’s fantasy packed with columns, interviews, advice, and addicting videos; you will find yourself looking for more time in your day to spend with us.

Mancave Playbabes is more than an escape for men; it’s a sanctuary for all that is good! Discover your inner Mancave today.