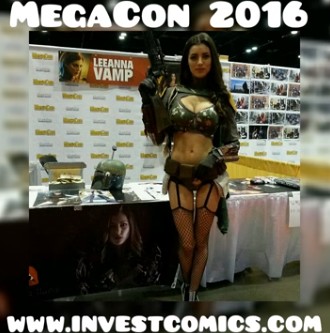 Another year in the books for InvestComics at MegaCon. This year was the first “full” year Fan Expo had creative control of the show. Gone are Beth and Christine, which ran an amazing show year in and year out. In NO WAY is the following review ANY indication toward Beth or Christine and the way they ran their MegaCon show. They were and are STILL champions in our book. 100% professionalism from them every single year we were part of their press core. We’d wish them luck, but we know whatever they choose to do next, they will rock that too! They don’t need luck, they’re that awesome. Thank you for everything.

When we did our initial walk-around, the first thing we noticed were the aisles. They were expanded so that fans were not crowded while walking. The staff on hand had a smile at every turn. The volunteers were equally as helpful as the Fan Expo staff. A great all-around experience regarding accommodating the InvestComics staff needs.

InvestComics took an abundance of photos at the show for fans who couldn’t make it. We do that every year and fans love it and respond! Thanks to all the fans who like, or heart, or retweet our photos from all of the social media sources we share them on. If you happen to have missed any, check out our social media links:

The panels were held in various halls throughout. The amazing theater we saw Frank Miller, George Takei, and Kevin Smith were worth the ticket price itself. We hope fans got a chance to see their favorite guest(s) in one of these grand rooms. Sound, lighting, seating and ambience was spectacular. If you happened to have missed any panels, do yourself a favor and get there for a few next year. You’ll be happy you did.

InvestComics would like to extend a huge thank you to Ashley Jimenez and the Fan Expo staff for their hospitality and allowing us to be a part of their MegaCon show. We look forward to seeing everyone in 2017!

Besides ALL of the social media images the InvestComics fans loved (and thank you for that!), here is a short video of some highlights. Thank you all….again!