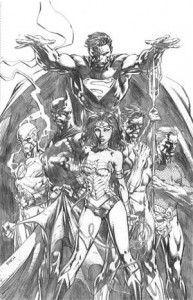 Well the time has finally arrived. The redo, restart, do over, resurrection, rebuild………..however you want to slice it or dice it, DC’s massive overhaul is being dubbed “The Relaunch”. Readers will get their hands on only 2 “new” releases this week from DC. As Flashpoint #5 ends in climactic fashion, Justice League #1 will begin the new era for DC. There will be plenty of cool covers to choose from regarding the new JL book. One in particular will garner the most attention, the David Finch variant sketch cover. It’s a beauty and it’ll be the best ratio book as far as collectable.

Meanwhile…..back at Marvel. No relaunch for them (Not yet!), but they have 3 comics to check out this week, obliviously nowhere near as epic as the DC’s books, but interesting nonetheless. Greg Pak ends hi s Hulk run, and what a run it has been. Incredible Hulks #635 promises to deliver.

Look for Marvel to push this next character in our faces for the next year or so. The Ultimate Comics Hawkeye #1 will probably sell out due to the cool variant covers by Adam Kubert and Neal Adams, as well as some good storytelling from Jonathan Hickman.

Marvel’s biggest issue this week will be the newest creation from Brian Micheal Bendis and Mark Bagley. Although this story sounds like it’s been done a million times, we’re sure (we hope) there will be a twist of some sort. This will be Marvel’s easy sell out of the week, and their next movie in 2015.

Check out the covers of the week below. Do you have a cover we missed that you think deserves to be here? Upload it and share it on the InvestComics Facebook page! Or comment below.

Until next week, Invest wisely.