On Friday InvestComics released our interview with Stan “the man” Lee from New York Comic Con 2013. Stan was his usual stellar self. We were the very last thing he did this year at the New York show, so we wanted to keep it short and sweet to let the man go on his way. He was tired, but Stan gave us a few minutes and we’ll be forever grateful. A special thanks goes out to Max for making this “second” InvestComics interview with Stan Lee happen. Also I would like to thank Rafael Rosario of Ratchet City Comics for his camera work and for making things easier this time around. Enjoy the short video below, as we sure enjoyed our time with the Legend Stan “the man” Lee.

Want to make some money this week? Want to turn over some comics to buy that first appearance of Thanos on the wall at your local comic shop or convention? Well InvestComics has your back this week, and it’s going to be a hunt for variants if you want to ante up. We prefer you ante up, because you will make money back and have some left over for your pizza, beer, gas, bills, or whatever needs some attention in your life.

In no particular order here, first up; Batman Superman (2013 DC) #5. This comic falls into the long line of gimmick comics. Especially what DC Comics have been up to lately, you know what some of those 3D covers fetched for a little while there. InvestComics did in fact inform the speculator that the 3D aftermarket was going to be short lived, and it was. We hope you collected your $200 after passing GO, because if not, you have a major portfolio issue. Aside from that, this week the gimmick is the Batman Superman #5 comic. What’s the deal with this issue you may ask? Well, it’s one of those sideways/horizontal comics. It’s been done before, nothing special here. Cerebus #46 (1983) was an early showing of the idea, but then Marvel got into the act with Fantastic Four #252 (1983). A unique idea indeed, but one that has seen many comics come this way throughout the years and thereafter. With gimmick comics, the aftermarket is extremely unkind. As a collector one has to know that gimmick comics are not to be fallen in love with. If you do fall, you will fall hard. You’ll be left with 3D covers, glow in the dark covers, poly bagged, etc up the ying yang. It’s a lose situation. This Batman Superman issue provides a variant sketch cover by Brett Booth. The retail value is in the neighborhood of $65. Buy this comic and let the frenzy set in regarding the 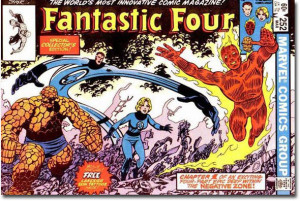 coolness of the sideways pages. Then spring out the comic for sale while the market is demanding a second print on the regular issue. It’s an easy win here.

Moving right along to another Superman book this week; Superman Unchained (2013 DC) #4. This comic will get you the most bang for your buck this week. Granted, the multitude of variants is not an attractive sight at all here and you will have to put down some cash for it, but your return will be greater. Scott Snyder and Jim Lee have been killing with their run here so far. How about you seek out the Jim Lee sketch variant for about $250….Get this bad boy CGC graded (grab a 9.8!), maybe even Signature Series graded and you will be in the black in no time. Why spend $250 on a variant you may be asking yourself? Well, this issue Superman is having all sorts of trouble with some bad guys right? So he enlist some help from “powerful friends” (as if Supes ever needs help right?). So we don’t really know who these “friends” are, and it’s an ultra-rare Jim Lee variant. Jim Lee + unknown heroes + variant + rare = chi-ching. Any negatives to speak about? Sure. One huge drawback has to be the total of ten variants. Highly unnecessary, but the Jim Lee book is the top draw here.

And the last of the Superman comics to check out this week; Action Comics (2011 2nd Series) #25. This issue reintroduces a major character. Oh and there’s a $10 sketch variant here to pick up. If the reintroduction goes over well, then that $10 is well spent. If not, then you can probably just sell back the 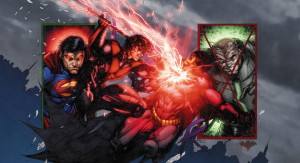 book for the $10 you originally bought it for on Ebay. Pick up the $2+ in shipping and cut your losses. You win some, you lose some. That’s how it works.

Marvel releases a comic that has someone “saving” their universe for a change and not destroying it. Longshot gives it a go in Longshot Saves The Marvel Universe (2013) #1. This one time very hot character commanded a lot of money for his debut in Longshot #1 (1985). Not these days though. Maybe with a resurrection of his career here, things will heat up in the aftermarket once again. The Deadpool variant cover is already sold out, and the regular cover is not that far from seeing a second print in its future. Captain America (2012 7th Series) #13 will give collectors a first appearance of Captain America’s new arch-nemesis, which is a must see. Cataclysm (2013 Marvel) #1, Leinil Yu variant is sold out. A $20 variant is a bit steep on a comic that doesn’t have much of a backbone.

How about a comic that has a backbone of six variants? Amazing X-Men (2013) #1; once again the multitude of variants is not an attractive sight at all here. Why not downsize the variants to just two, plus the regular cover? But six from Amazing X-Men #1 and ten from Unchained Superman #4? Yes, the market in the past few years has been inundated with the perception that “more is better”, and it’s not. But let’s all understand one thing; comic book businesses are in business to make money. If Marvel, DC, Image, or anyone else could make more money from printing ten variants, then it will be done. So with the already sold out Amazing X-Men #1, there are two $50 variants that are for the buying here. Get either one, hold onto them for a little bit while the series heats up. Then dump them at the first sign of a slowdown. The serious money lies within the focal point of its main character; Nightcrawler. The blue guy’s first appearance is in the classic Giant Sized X-Men #1 (1975). Buy this comic whenever you have a chance. No reason to ever NOT buy it.

Word got out this week that Marvel leaked who the mysterious Spider Hero is. This week Mighty Avengers (2013) #3 has Spider Hero front and center defending the city he loves. If you think Spider Hero will reach tickle me Elmo status craze, then check out Mighty Avengers #1 (2013) for his first appearance. Want to challenge yourself with a $300+ variant of this comic? Okay here it goes. Get the Eminem variant (yes the rapper) and get a CGC witness to go with you to get the variant signed by Mr. Marshall himself. How cool would that be?