A few of the new comics this Wednesday will bring with them some debuts. It’s been a while within the InvestComics Hot Picks that we have had a week like this, so let’s relish in it for a bit!

Okay done relishing? Let’s get to business shall we?

One of the highlights this week has to go to Justice League United (2014) #0. There has been a lot of talk regarding the debut of Justice League Canada team and a major new Canadian character beginning with Justice League United #1. A special Justice League Canada #1 cover will also be in the mix regarding the new team. The fact is that DC’s version of Alpha Flight AND “Equinox” will both debut in the number zero issue, not the number one issue. So with this in mind, buy the new JLC #0 so that you’ll have the true first appearances. Then again, with the whole “cameo” nonsense within the speculation market, maybe you’re better off covering your butt and buying that number one issue when it comes out too! All of this to ponder (not really that hard, just kidding) with a $40 variant sitting out there! Your call on that one……

The Aquaman series is still going strong. A bit of a surprise no? Check out Aquaman (2011 5th Series) #30 for the debut of the New 52 version of Hercules. Not much you can change on that dude right? Come on DC, surprise us some more.

Looks like Marvel will be debuting new characters and reinventing some things in their soft relaunch of sorts. Daredevil (2014 4th Series) #2 will be introducing some new villain(s) (maybe) and will also have a forgotten Marvel hero come from the past and shake things up a bit. Fantastic Four (2014 5th Series) #3 will have the debut of the team called the Wrecking Crew. Check out their first appearance way back in 1974’s Defenders #17.

Elektra gets her third crack at her own series this week. Elektra (2014 3rd Series) #1 will come with several variants, but one stands against the rest for good reason. Mr. Elektra himself Bill Sienkiewicz will have a variant cover to buy if you’re interested. At a steep $60, it’s still a nice variant to pick up, grade/signature series with CGC, and hold onto it for a while. It will appreciate right away, but more so over time. The man is a legend. Daredevil #168 (1981) features the debut of Elektra. It’s still a well sought after book. It’s a gradual book to own, just like the Bill Sienkiewicz variant. Like a fine wine, ages with time!

There are two amusing Marvel solicitations to point out this week. Maybe not amusing to some, but still worth noting nonetheless. Iron Patriot (2014 Marvel) #2 bluntly states “James Rhodes dies”. How’s that to sell some books? How about the Guardians of the Galaxy (2013 3rd Series) #14 solicit dubbing Brian Michael Bendis as the “cosmic captain”. While we all love Mr. Bendis, and no disrespect here, but if he’s the captain, the General is Jim Starlin. Just saying.

Anyone remember how My Little Pony from IDW caught everyone by surprise in the spec market? Well don’t get caught without your hay in the barn again! Hasbro designer/illustrator of My Little Pony Gayle Middleton has created a new pony! Ghost Pony’s! Just be sure to spend an extra $3.99 this week to pick up Vamplets Undead Pet Society (2014) #1 from Action Lab Entertainment. There is a huge payday hidden here IF the numbers are right. Gayle Middleton will have a variant that is limited to 1000 copies. The variant is $4.99. Good luck finding that. If for some reason nothing pans out. Give the comic to your sister, niece, girlfriend, or donate it if you want. It’s only a $4.99 risk here.

(Insert sarcasm here) Another MAJOR event is on the horizon for Marvel. Original Sin (2014 Marvel) #0 will be the comic event equivalent to “Who shot J.R.?”. If you don’t know what that means, I’m truly showing my age. Google it, but anyhow, Nova runs up on a dead Watcher and someone killed him. Whodunit?! The Watcher knows, but he’s dead.

Secret Origins was always a fun read from DC Comics. Check out Secret Origins (2014) 3rd Series #1 as they bring back the awesomeness of things we didn’t know about our heroes/villains. 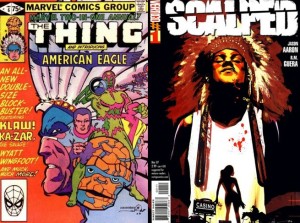 Lastly, a few weeks ago on March 18th I released a special article called “InvestComics Hot Picks Special: Speculating Marvel Comics – B Sides”. Within the article I mention this about the American Eagle character from Marvel Comics – …..”There is an influx of African American/female/foreign characters leading the way. Why not focus on an American Indian? Why not have a character that represents the foundations of America a mainstay within the Marvel Universe?” Well this past week InvestComics reported on the DC Vertigo title Scalped getting the development nod from WGN. You can check out that quick snippet right HERE.  Not to toot my own horn here, but things like this happen on InvestComics quite often. Sometimes there are misfires too, but there are more hits than misses around here. Stay close always; you never know what’s coming next!

…….Like Namor, yeah Namor. He’s going to be some sort of a factor. Be it now or in the not so distant future, but watch out for him. I’ve mentioned this before. This is a gut. Who knows…….?