So how did you all like the short Baltimore Comic Con video? If you missed it, here it is….

InvestComics will have a full rundown of all of the comic shows that we were a part of this past year. Quite a few! Some great highlights and very few lowlights, but there was one particular lowlight that far exceeded anything we could have imagined, but you’ll have to read the wrap-up article to see exactly what I’m talking about. It’s something that all collectors should definitely be aware of. It’s an alarmingly disappointing find and very important too. With that, like I said, the good superseded the bad by a huge margin.

Some quick DC Futures End comics to touch on…. 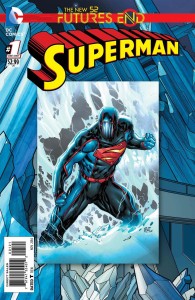 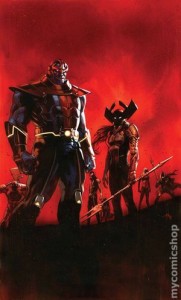 A new Superman will be making an appearance in Superman Futures End (2014) #1. This dude has it right with a full facemask on. No one will be mistaking him for Clark ever. I’m really digging the new look. Check it out on the cover to the right.

A good amount of copies remain for the Harley Quinn Futures End (2014) #1 issue, kind of surprising figuring how hot Harley was or is. Guess the cool down continues to occur.

There is only one sold out Futures End book this week. That goes to Catwoman Futures End (2014) #1 3D variant. Why is this?

New characters, costumes, and villains will continue to pop up in the Spider-Verse story line, so be sure to stay on top on these books. Edge of Spider-Verse (2014 Marvel) #3 will be one of those books.

Robert Kirkman continues his onslaught of sold out comics. Can this dude do no wrong right now? Be very sure to buy Outcast (2014 Image) #4 this week. Not only because it’s one of the hottest series on the planet right now, but because this issue introduces a major player into the fold. Let’s see, a mainstay character’s first appearance in a HOT comic series by Robert Kirkman? Uh yeah, buy this. Buy this comic regardless of the slight lull in the aftermarket. When the Outcast series picks up steam regarding a television show, you’re going to wish you had the back issues. Especially an early issue with a major intro like this one coming out this week. Did I mention it’s sold out?

…And another hot comic that has the comic fandom in a bit of a tizzy these days, sold out two consecutive times before and now this week marks its third sellout in a row; Wool (2014 Cryptozoic) #3. Jimmy Palmiotti and Justin Gray continue to bring it.

Parallel Man (2014 Future Dude) #1 will be sold out in a week, should check that out. Roche Limit (2014) #1 will without a doubt be seeing a second printing very soon. It will be sold out by Friday my speculator friends, better get on this one. It’s a space opus, very interesting story, and a new Image comic……all adding up to the possibility of something special. Buy this comic. Town Called Dragon (2014 Legendary) #1 is on the verge of a sellout status.

That’s is for this week. See you soon.