Lots of comics to cover this week. Hope you have your reading glasses handy and some cash in your pocket this Wednesday.

The fun starts with Spider-Man and the X-Men (2014) #1. A team-up every fan always loves. This comic will feature the Jurassic Park storyline. Well not really, but it will have two characters from way back in time appear (way back in history time, not real time). Suaron and Stegron (aka the Dinosaur Man). If you’re in the market for a couple of easy gets, Marvel Team-Up #19 from 1974 features the first appearance of Stegron. The best part of this comic; Gil Kane on pencil duties and Len Wein on writing duties. Then you have the big bird (not that big bird) first appearance; Suaron first appeared in Uncanny X-Men #59 (1969). That book had Neil Adams on art duties and the team of Chris Claremont/Roy Thomas on script duties. So there you have it, C level first appearances from A level Legends from the industry. Those are purchases/signature series/graded comics waiting to happen. Not for resale value, for keepsake value. They may not rise in significant value at a quick rate, but they are collectors items because of the names attached.

With the Dr. Strange frenzy upon us within the speculation world, it’s funny how All New Ultimates (2014) #11 plays a part in this

madness ever so slightly this coming week. You see, the ultimate Ecstasy is making her second appearance in the Ultimate universe. Her first being the previous issue. Ecstasy first appeared with the Dr. Strange universe in 1986’s Dr. Strange #78. Now what does this mean to you? Well it means that if Marvel Studios reaches into their vast character library and pulls her out to be a part of the movie….well you know the rest. This comic as of right now is probably sitting in some 25 cent long box someplace. Not a bad investment here for a quarter right? If anyone finds a few for a quarter, be sure to send a couple to our PO Box as a thank you.

As always, if you’re a regular visitor to the InvestComics website, you will know that these Hot Pick articles have made many speculators turn over some serious cash. The recommendations and predictions that have come to fruition are boundless. There is simply NO other comic book website that has been doing this since 2005. None. In the new Earth 2 Worlds End (2014) #10 Darkseid will be wreaking havoc once again and once again I implore you to get his first appearance before it becomes too far out of reach (see Thanos, which InvestComics recommended many many years ago to buy). The first appearance of Darkseid comes with some ridiculous cameo/first full appearance mumbo-jumbo. As with Incredible Hulk #180/181 does, but with Darkseid, it works the way it’s suppose to work. The cameo in Superman’s Pal Jimmy Olsen #134 (1970) seems to pull more weight in some markets than does Forever People #1 (1971) which features his first FULL appearance. Nonsense really. A cameo is the absolute first appearance ever of a character, end of story. The cameo should always command more money. Not an arm, a leg, an eye, or a foot, a full body/full face AND more importantly the mention of their name. Wolverine first appeared in Hulk #180, that’s it. Darkseid first appears in Superman’s Pal Jimmy Olsen #134, that’s it. Let’s stop having the nonsense of the stronghold collectors in our hobby dictate what is what. A first look at someone is in fact their first appearance ever, not cameo or anything related to not recognizing the first appearance and that’s it. You can twist it twenty ways till Sunday, it’s their first appearance. Darkseid was mentioned by NAME in issue #134. He then went on to appear in the very next issue too! Yet Forever People #1 is labeled as First FULL appearance and commands some bucks. Wolverine was even mentioned by NAME in Hulk #180, what more do you need in that case too? Absurd. So anyway, getting off the soapbox now I will say that Jimmy Olsen #134 is a get. InvestComics recommended this comic as an extremely strong buy back in mid 2013 right HERE. Not only will you find the MUST buy here, but a Darkseid checklist too! Yes InvestComics is awesome we know. 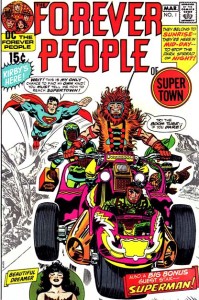 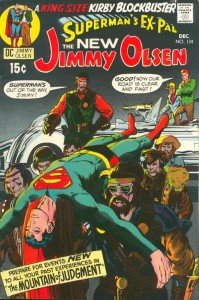 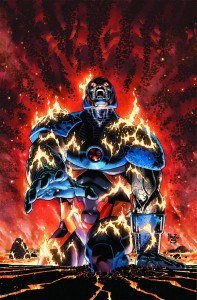 Spider-Verse Team Up (2014) #2 continues with the red hot Gwen Stacy Spider-Woman. InvestComics did inform you to buy the first Gwen Spidey here on InvestComics Hot Picks right? Oh yes yes of course we did! Anytime anyone wants to donate some hot recommendations to InvestComics, the PO Box is below! Haha! You’ll get a mention on here too, a plug, whatever you want!

Although only one comic is completely sold out this week at Diamond, a few are right on the cusp. Let’s do a quick roundup here. Devil’s Due has a hit on their hands with Solitary (2014) #1. The cover is very reminiscent of the cooled down, but once red hot Adventures of Superman #14. Sinergy (2014 Image) #2 is a sold out comic walking. If you’re a fan, get it before it goes to the second print. Look for Bitch Planet (2014) #1 to sell out as well. A fantastic creative team delves into the woman’s prison system. Sounds like a hoot! The popular East of West gets a new number issue; East of West The World (2014) #0. And it’s sold out already. While Magdalena has always been popular among fans and a fun read, it never did or does well in the spectator market. Magdalena Seventh Sacrament (2014 Image) #1 will sell out and no one in the aftermarket will care. Erik Larsen pulls out all the stops with his nearly sold out anniversary comic; Savage Dragon (1993 2nd Series) #200. A few variant covers accompany this milestone issue. Congrats to one of the hardest working creators in the industry; Erik Larsen. Avatar has quietly put together a nice intelligent read comic series with God is Dead. This week however, God is Dead (2013 Avatar) #25 will have a double sized, new story arc jumping on point. So what are you waiting for? Jump on. Nothing like have some squirrels kick some ass in a comic book. Check out Squarriors (2014 Devils Due) #1 for some reading and squirrels kicking ass. Harley Quinn + number one issue = a hot comic; Harley Quinn Holiday Special (2014) #1. Although this doesn’t give any hints of significance or smell like a funny cigarette, so don’t expect anything to smell too good from this one but a very awesome Harley book.