……And please please lets enjoy the time here. No fanboys please. And if  there are any inaccuracy’s, it’s okay we’re human. Be sure to help us out and correct anything without a fanboy or hater hat on. Reminder: any speculative opinion is and cannot be inaccurate. It’s a guess.

So what makes Detective Comics Endgame #1 more of a standout than Howard the Duck #1 this week? Why even compare them really? No reason, just because. Well maybe because Marvel is pushing this C list character down our throats with ten variants at last count? And the Detective book has one awesome regular cover. Of course the comic book collecting life isn’t all about cover though, right? It is in fact though the first appealing thing one sees, so the marketing must captivate the eye and sell it first. Make that person WANT to pick up that comic. So I ask the question, one sees all bazillion of the Howard the Duck #1 variants and then one sees the Detective Comics Endgame #1 sitting on the shelf. Besides your shop having your books displayed in alphabetical order, in which the first book you probably will see is the Batman book, which would you be so inclined to pick up and thumb through first? Maybe some do pick up the Howard book first, but the majority will probably gravitate towards that awesome Rafael Albuquerque cover for Detective Comics Endgame #1. Well that’s all about the outside, what about the inside? One book is about a Private Investigator that is a umm….a duck and the other is about a new group of teenagers kicking some as* in Gotham to save it from being overrun by Jokerized victims. Maybe you still like the Howard book. The Howard book will be a fun read though, so get it for at least that reason! Both are cool. So don’t get all hurt that I’m not that high on the Howard book. Speculation = opinion. 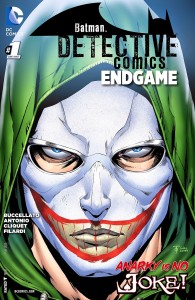 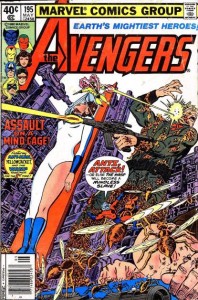 Not that owning the Fear #19 (1976) book (first appearance of Howard the Duck) is a bad thing, but if you’re in the market to buy a good first appearance for $250 or $500 dollars, there are other books to seriously consider. Ask yourself this. Would Disney really want to jeopardize/replace the lure of Donald Duck with a wise cracking, cigar smoking duck? I highly doubt they want to throw Howard in our faces as the duck to really remember and constantly have questions from children to adults saying, “Is that Donald Duck?”. Um no. Disney would not want this. Why do you think there is no real talk about a cartoon or a movie pertaining to Howard? For this reason. Too close to Donald. Maybe someday Disney will bite the bullet and release a Howard cartoon or movie, but as for right now it’s not happening. Maybe a Howard the Duck comic book is a feeler to see what sort of attention it gets? Then maybe we’ll get some real news of something? This speculator doesn’t think we’ll see anything for some time. The Donald lure is way more important to Disney right now than destroying the very fabric of Disneyland or anything pertaining to Donald with people constantly mistaking Donald for Howard. By

comparison, will we ever see a nasty mouse character created within the Marvel U that looks very similar to the Big Mouse with an attitude and possible cigar? The short answer is no. Howard will stay where he is right now and Disney is very content with that. Buy Detective Comics Endgame #1, looks like a winner. (Not that many floating on Ebay right now. Click the link and get yours if you want it!). Story sounds good, good creative team, possible intro to a new team and that cover……

Instead of paying so much for a Fear #19 comic, why not check out who Ant-Man is dealing with in Ant-Man #3. Although Taskmaster is not in comparison to Howard as far as notability and pricing as far as first appearances go, his (cameo) in Avengers #195 from 1980 is a nice book. Recommended by InvestComics a few years ago when it was a $7 book, it has since climbed into a decent area and is still very affordable at this point. His first “full appearance” is in Avengers #196. Rumors surround Taskmaster as a possible movie appearance from time to time as does the possible breakout ability he has as well. Nothing of either end really….yet? Either way, InvestComics is still high on this comic after years of recommending it. Be sure to click the RED link to bounce over to Ebay (it’ll open in a new window, leaving your page right here!) to throw a bid down or a buy it now. A George Perez book with upside here. Be forewarned, various grades and pricing on Ebay for Avengers #195 are very sporadic.

Depending on how long you’ve been a speculator, you will remember the Valiant comics craze. Ask a seasoned veteran about the ridiculous Valiant pricing at one time and listen to how many people lost a tremendous amount of money in these books. Now flash to 2015 and you will see that the speculator just ain’t going for that again! Many new Valiant comics have gotten a new life (relaunched) on the label, but the back issue market for these books from which these characters first appeared have done nil. So with that, Ninjak #1 will reappear in his own title. Ninjak first appeared in Bloodshot #6 back in 1993. If you click the red link here, that Bloodshot #6 (see the red link again!) can be yours, a NM for only $1.79. My my, how times have changed.

As there is most weeks, there is always an Image Comic to keep an eye out on. This week it’s Southern Cross #1. (Only 10 of these now on Ebay with a couple of variants). An interesting story with only one variant cover to show for. The variant is from Tula Lotay. She’s been around a couple of years, but is making her presence known. Watch for this newbie as she comes up the ranks with the Babs Tarr’s, Stacey Lee’s, Fiona Staples‘ of the world. Notice a trend here? Just saying. And very awesome. 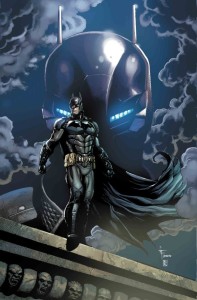 A video game adaptation comics really surmount to much within the aftermarket, but they are still great nonetheless. Check out the new Batman Arkham Knight #1 as it leads up to the new video game release. The Gary Frank variant is sold out already. It is a beauty too! Get it on Ebay right now if you want! That Red Link! Helping everyone out here!

The Disney spiteful demise of the Fantastic Four comic is almost here. The next to last issue promises lots of cool things. Fantastic Four #644; the end is near.

Spider-Gwen will continue her “torrid” pace of popularity this week. Will number two sell out too? How long will the madness for Edge of Spider-Verse #2 continue for? (Insert sarcasm here) Only 230 listings at the present moment. Will Spider-Gwen be the next Harley? Will she be the Howard the Duck? Time will tell! And speaking of Spider-Verse, Amazing Spider-Man #16 name drops Spider-Verse within its solicit this week. Anything going to pop up here?Will Marvel ever let Spider-Verse go already? Spidey also has Amazing Spider-Man Special #1 coming out. Cool read here, nice Adam Kubert variant and who knows what can pop up here too?

Check out the pages of Ms. Marvel #13, may have an intro. Cool book anyways.

A few number one issues to definitely check out this week. Surface #1 from Image Comics. Spawn fans rejoice, Spawn Resurrection #1 will not only be a new beginning, but a Todd McFarlane variant will come along for the ride. The wildly successful Sixth Gun will begin anew with Sixth Gun Dust to Dust #1. Creator Cullen Bunn of this series also has another book coming this week; Hellbreak #1. Great stuff here. Bill and Ted’s Most Triumphant Return #1 from Boom Studios is a fun book. Bill and Ted originally made their comic book debut in 1989’s Bill and Ted’s Excellent Adventure Movie Adaptation #1 from DC Comics.

Postal #2 from Image hits this week with a very cool variant. Postal #1 showed some nice sales. Will the series pick up some more steam? 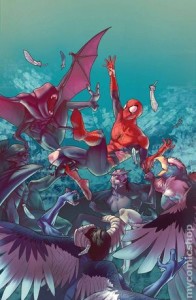 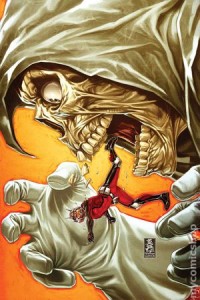 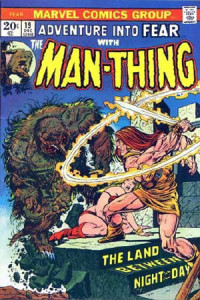 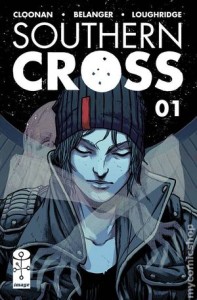