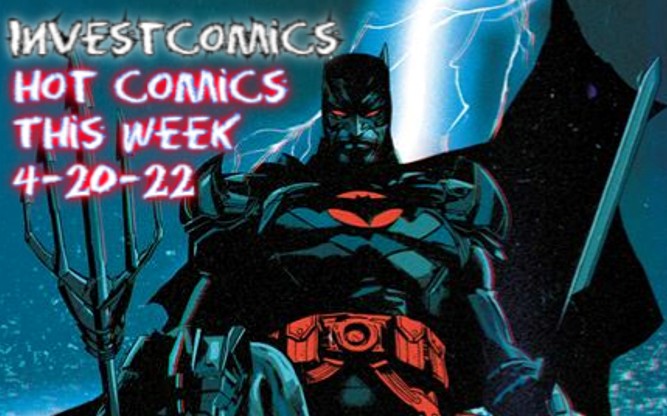 Here are this week’s top Trending/Spec Comics out this Wednesday 4-20-22.
Please note: All new comic releases can and will change release dates from time to time. Check with your local comic shop on the guarantee of arrival time. If ordering from eBay, check with the seller or post details.
Like something we’re talking about? Like a cover? Like the debut of a new series? A first appearance?
Click on ALL Red-Highlighted LINKS/Comic Covers to BUY/BID from ALL available eBay sellers now (always buy from high-rated eBay sellers).

Hulk #6 – The first appearance of Titan. A few weeks ago we informed the masses around here to pick up this comic on eBay, as a future purchase. The pricing has gone up ever so slightly, but still pricey nonetheless. The regular cover(s) are affordable, but it’s the incentives that are burning up a bit. We say a bit because they aren’t rising as the speculation market would really like. There isn’t a “Knull” effect happening here. Why is that? Well, let us count the ways. First, a speculation market is always predicated upon something that is unexpected, a slow progression even, and sometimes an outburst. The Knull story was a build-up over time and then the speculation apps, websites, and video experts decided it was time to cause an unnecessary ruckus and make some serious cash with the Knull character (storyline). While a good story/character, in the grand scheme of things, the first appearance of Knull is simply overpriced. Yeah, we said it. Yeah we own it already, so get that thought out of your heads, we ain’t bitter, we’re realists. What has this character proven really? Absolutely nada. The speculation is based on the “hopes” he’ll be a part of a movie story one day. This is what the apps and websites have sold collectors on. Maybe, just maybe, Knull will appear in a movie…..now pay us 2K+. Did you know that the first appearance of Knull, a CGC 9.8 sold for ONLY, ONLY $285 recently? People have lost huge percentage points on that one. Absurdity at its finest here, but to each their own. So, the expectation here for the “Knull-like” Hulk character could be a burn-out of sorts. Collectors are tired of the demand not meeting the expectations, so they lay off a bit. Another reason the Hulk #6 MAY not exceed speculation expectations here is their love for writer Donny Cates. No, calm down fanboy, everyone still loves Donny, but the love is no longer in its honeymoon stage. Happens all the time with hot comic creators. Check out the lines at your local comic convention and see how a hot creator from 3 or 4 years ago is fairing. It’s a “who’s hot now” mentality when it comes to the comic speculation market. Long-term speculation is a lost art. Simply does not interest a collector to purchase a first published work anymore as it was years ago. Donny Cates first published work in Dark Horse Presents #24 (2013), can be purchased right now within the $40-#70 range raw. Not too bad considering he’s a rising/established, star in the comic book industry. Those are the prize books in our opinion, not the possible character that MAYBE, who knows, possibly, could appear in a movie someday. Those are not guarantees, the Dark Horse comic mentioned, that is a guarantee in the sense that Donny Cates will never have another first published comic book again, ever. Yes, speculation is fun, we get it, but the landscape created these days are out of control and are only feeding the fat cats CREATING a false narrative market all the time to get your hard-earned money. The first appearance of Knull is a prime example of insanity here. A CGC 9.8 for $285? Wow, you imagine the dude that bought near or past the 2k mark for that same comic not too long ago?
Regular visitors to InvestComics have heard this diatribe over and over again. All of the other spec places follow us closely, but never credit our site credit for setting things straight and reading the market as well as we have since 2005. Notice how the words “Pop Culture” entered into most of their vernacular since we took on the name Trending Pop Culture years ago? Yeah, they follow us (we know they do). Facts.
Back to the Hulk comic this week. As said, the ever so slight movement in pricing could be an indicator that the Knull-Hulk is just a passing thing, and speculators that are paying at the top are tired of getting burned a bit. Maybe the market is waiting for the release on Wednesday to see if something inside the comic changes things in a drastic way or maybe the new character is either a bad-ass or a lame-duck. The small to nil movement in the aftermarket is the tip-off here. The new character does not only appear on the expensive incentive cover. Plenty of affordable covers to choose from where Titan is donning the front. Be sure to pick one of those at least to add a first appearance to your collection. The more expensive variants, well, that’s your call.
Silk #4 – The first (full) appearance of Old-Lady Cindy? No one is talking about this. Maybe because we’re incorrect? Maybe because no one gives a rip? That’s her on one of the regular covers too. Her name should be VERY Old-Lady Cindy.
The Flash #781 – A new story arc begins with the introduction of a new villain.
Captain America #0 – Marvel continues their mindset, two Captain America’s are better than one. Steve Rogers and Sam Wilson star in a new “saga” (limited series?) named “Captain Amrica”. That’s super original, no?
Avengers #55 – The newest Nighthawk is spotlighted here as only Jason Aaron can tell a story. It’ll be interesting for sure.

Justice League #75 – DC Comics going with the flare for dramatics this Wednesday. “The Death Of The Justice League.” Complete with a “coffin cover” and a “black die-cut word cover”. An oversize issue. And a marketing campaign slogan that says “…..The Next Big DCU Event.”
*insert eye-roll here. The Dark Army will be the cause of the Justice League’s demise this time around. So, writer Joshua Williamson spins the tale here of the last issue of Justice League. Until a new Justice League is formed after the Big Event with 20 variant covers accompanying the new number one issue. All of this is basic speculation knowledge of what is to come down the pike. We are 99.999999 percent sure a Justice League number one will happen after the Big DCU Event. But, until then, let’s see where this issue and the Big Event truly take us.
Spider-Gwen Gwenverse #2 – In today’s crazy spec market, first appearances are always the go-to. For obvious reasons. The covers have become a thing too. Not just for the pretty ones gaining serious monies, then tanking, but for what we spoke of earlier, first appearances. These days, it’s hard to tell if you’re looking at a first appearance cover or not, until you do some deep diving/searching. The new Gwenverse series here will introduce a ton of new Gwen characters, so when one appears INSIDE the book, it could be their “second” appearance because they’ve already appeared on a variant cover. Is this the first Gwen-Wolverine on the cover? Not sure honestly. Do that research and find out.
Flashpoint Beyond #1 – Geoff Johns single-handled changed the Flash character/history with his Flashpoint story years ago. The Flash character was in the doldrums of obscurity before Johns made him relevant again. Now the once uber superstar writer will try to strike lightning twice this week. Lending his story talents to the Batman Beyond world.
Doctor Strange Nexus Of Nightmares #1 – It’s no secret anymore that one of the villains in the new Strange Multiverse movie will be Nightmare. A Marvel character absolutely no comic reader ever gave a hoot about, but Marvel will shove it down our throats to help sell a movie. The question is, do these ploys truly work? C-list characters get the spotlight to sell a comic movie. We say, no. Comic fans will see it regardless. Most of the forced comics, like Peacemaker, turn out to be goofy fill-ins to entice an ALREADY comic fan to watch a tv series? Makes zero sense. Don’t even say or think it’s to get new readership, that’s not even fathomable. If ALL of those Disney Avenger movies didn’t improve sales or bring in a sh*t ton of new readership, Nightmare will definitely not do it.
Marvel Multiverse RPG Playtest Rulebook – The Marvel introduction to the new Multiverse RPG. This rulebook contains everything you’ll need to get started. Veteran writer Tom DeFalco leads the way here.

Last week we gave comic speculators the heads up on possible first appearance covers. Marvel started providing eye candy in mashing up Spider-Man with various characters on variant covers. This week it continues. As we said last week, we have no desire in seeking out if the Shang-Chi Spider is indeed the first appearance on the cover. We’ll leave that up to the speculator willing to put in that work. With that said, we think most of these could be first appearances every week. Spider-Cap? Maybe seen before? Spider-Hulk, that’s most likely been mashed already. Who knows? Who cares, these covers are dope anyway. Click away and buy these “first appearance” covers. Just a matter of time before one of these silly first appearance mash-ups catches fire. 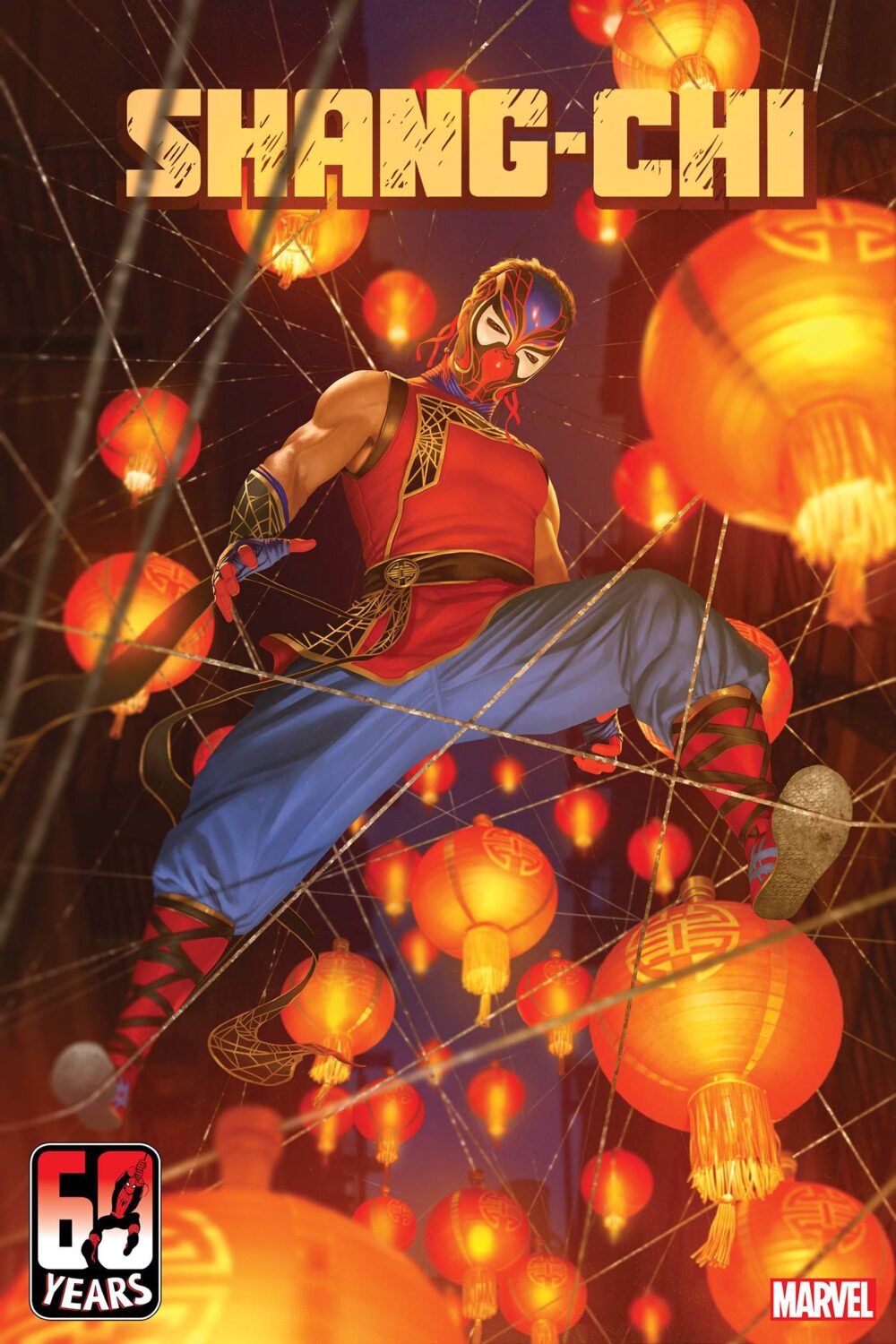 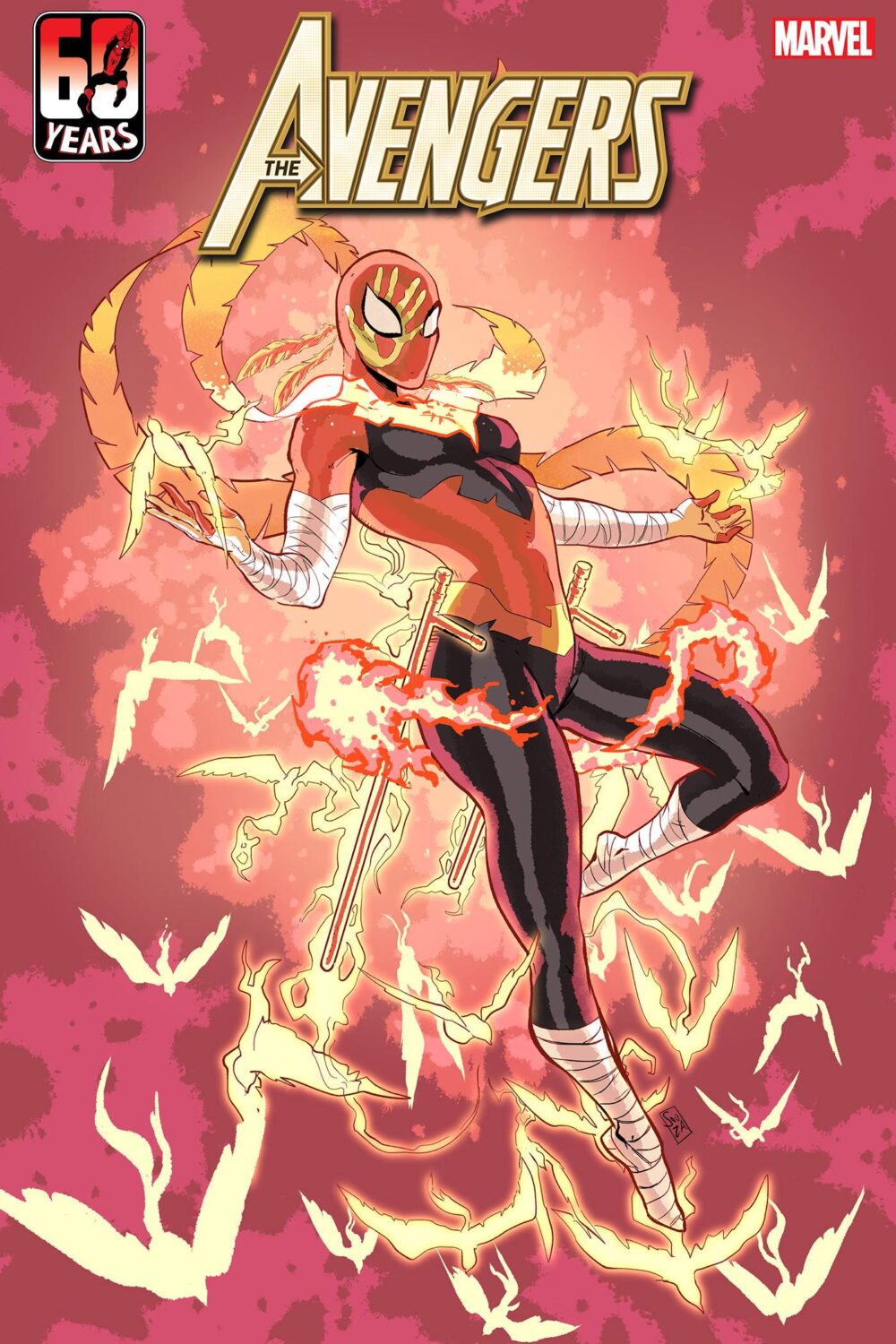 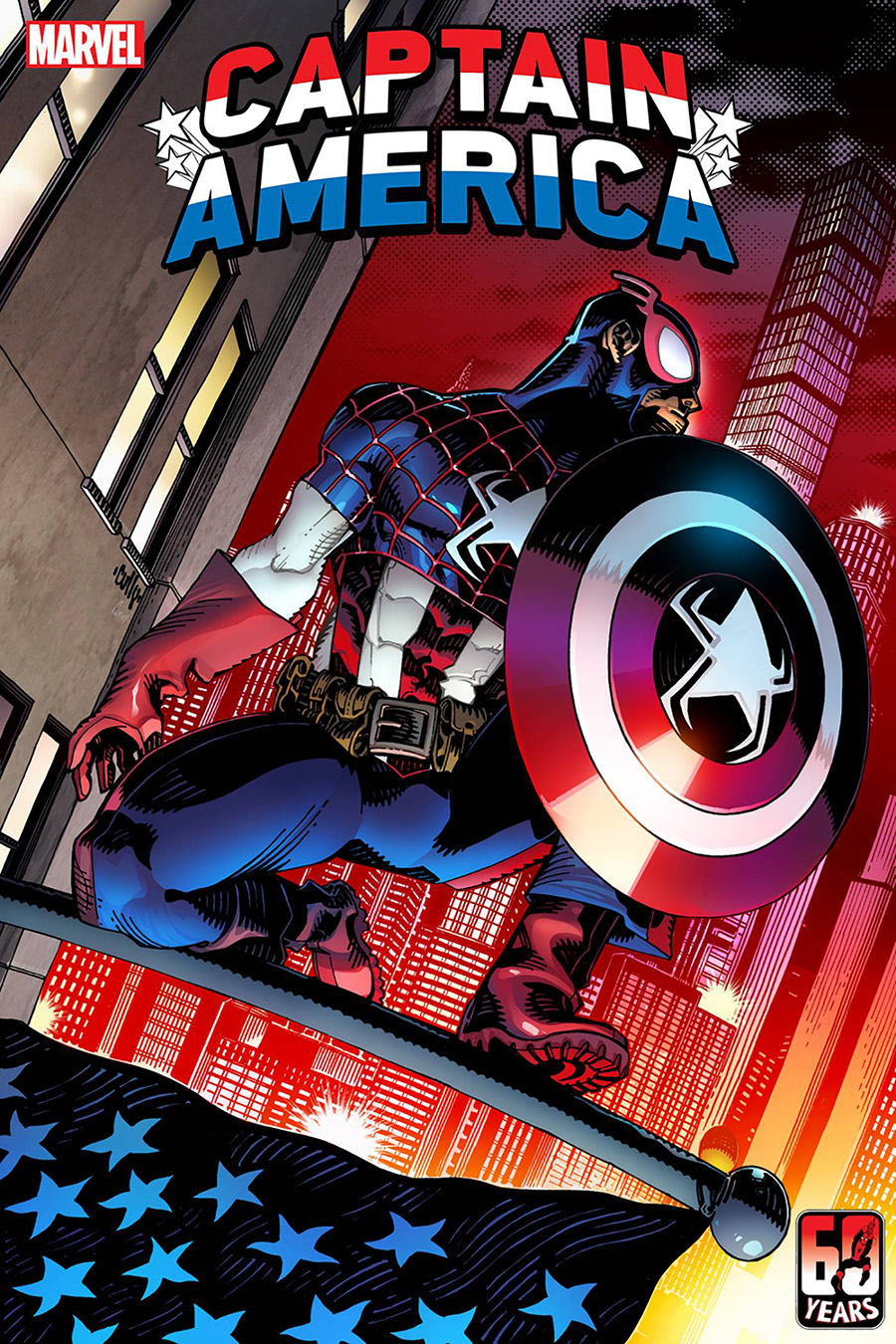 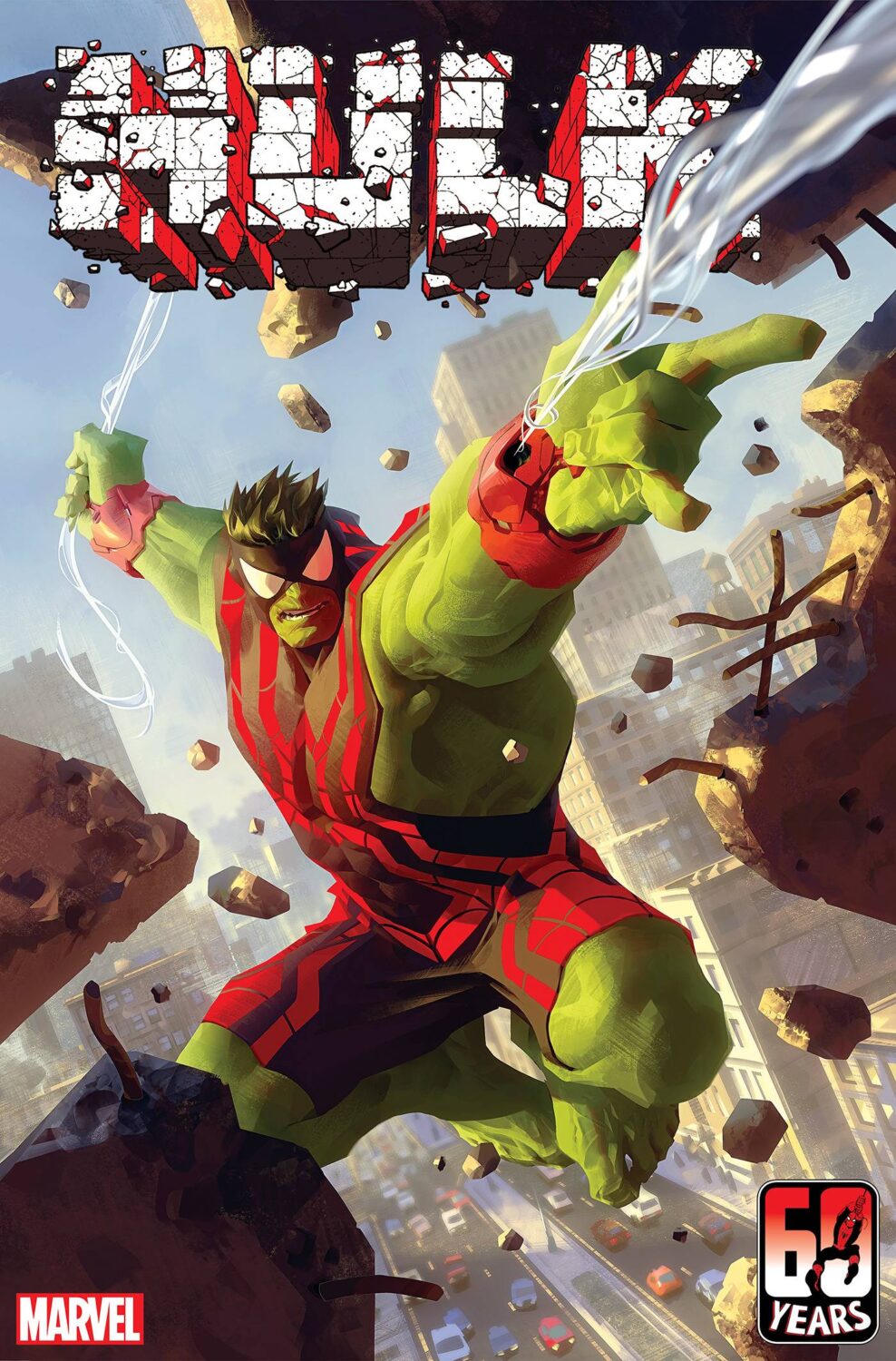