Anyone that lives in and around the South Florida area definitely knows about Tate’s Comics in Lauderhill. If you are not from the area or if you’re ever visiting South Florida, you need to get to this store. There are a few InvestComics You tube video’s that you can check out on the You tube channel regarding events that IC has covered at Tate’s. This year however, IC teamed up with Ron Kerronian, owner of the website known as Comic Privy. You can check out the coverage of this year’s Tate’s Tent sale right HERE. You can also check out Ron’s website Comic Privy right HERE.

So let’s get to the Hot Picks for this week.

Marvel has a few books to check out this week. Battle Scars #6 may finally give the big reveal that many of us have been waiting for. This comic promises to “rock the Marvel Universe.” Hmmmm…..has Marvel gone to that well one too many times?

In the department of NOT going to the well too many times are comics for the younger readers. In recent weeks, InvestComics has covered a plethora of younger generational comic releases from the big 2. Looks like there may be a market after all for the young lads! The next phase of bringing in new readership seems to have hit because of the very cool animation that’s out there. This week we see the Ultimate Spider-Man Adventures #1 hit stands and reaching out to the next crop of fans. Good job reaching out guys! Now if

they could only figure out getting those girls to pick up comic books…..

Wolverine #305 features the writing skills of “rising star” Cullen Bunn. One of Cullen’s first works can be found in Oni Press’ The Damned: Prodigal Sons #1 from 2008.

The Goon #39 is a parody issue of the craziness that is going on all over the comic industry as far as storylines go. The cover alone is absolute brilliance brought to you by the brilliant Eric Powell. “Hey, Kids! Pointless Gimmicks Inside!”

Eric Powell is Goon’s almighty creator that was first seen in the pages of Dreamwalker #0 from Avatar Press; a vastly underrated comic from 1998 that should be in your collection.

IDW will have an instant sell out this week with Popeye #1. The Action Comics #1 homage cover alone will have fans buying this comic. Popeye was first introduced in comic strips way back in 1929, well before the Superman’s and Spider-Man’s of the world. It wasn’t until the late 1930’s that Popeye finally appeared in a comic book. One of the earliest comics listed is Popeye (Feature Book) #2. And yes after all these years, spinach is still nasty. 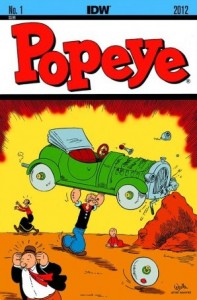 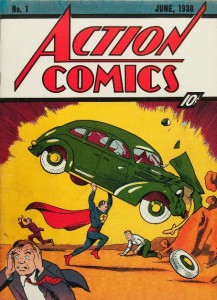 Also from IDW this week, Hero Comics 2012 #1 will be a benefit book for Hero Initiative. With all the goodies you’re

A couple of number one issues to check out this week are two of Rich Johnson’s comics, Scienthorology and Captain American Idol. Fun stuff.

As always, scroll through the covers of the week below!

Until next time, invest wisely.