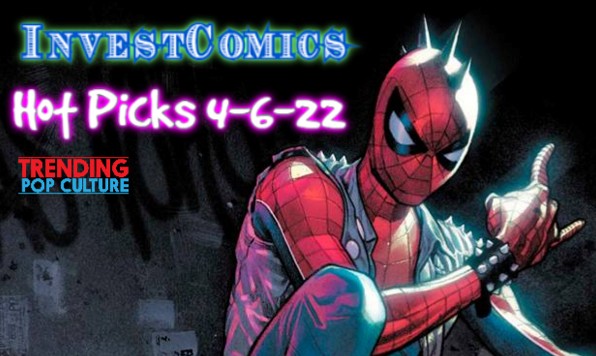 Here are this week’s top Trending/Spec Comics out this Wednesday 4-6-22.
Please note: All new comic releases can and will change release dates from time to time. Check with your local comic shop on the guarantee of arrival time. If ordering from eBay, check with the seller or post details.
Like something we’re talking about? Like a cover? Like the debut of a new series? A first appearance?
Click on ALL Red-Highlighted LINKS/Comic Covers to BUY/BID from ALL available eBay sellers now (always buy from high-rated eBay sellers).

She-Hulk #3 – The Jack of Hearts is back. See him? Right there on the lovely Jen Bartel cover. We here at InvestComics have a certain unexplained affinity towards the colorful JOH character. Reasons truly unexplained. So much love for the character, we’ve been speaking of him for over 15 years. Here are a few things we’ve said over the years, “Jack of Hearts #1 (1984). One of the best D level Marvel characters ever. Back in 1984, this limited series hit with little fanfare but was still a great read. Writer Bill Mantlo brought Jack of Hearts to a new level here. So much so (insert sarcasm here) that Jack of Hearts went on to appear about 10 more times in various comics in the next 7 years. Jack first appeared in The Deadly Hands of Kung Fu #22 (Cameo). His first full appearance is in the next issue; The Deadly Hands of Kung Fu #23. Here’s a cool thing here. The creator of Jack of Hearts (Bill Mantlo) teamed with the great Keith Giffen on the cameo issue, then teamed with Legend Gil Kane for the first full appearance. That’s an impressive cameo and first right? Oh, Jack of Hearts where art thou?” ~ “Jack of Hearts. Here is a long-forgotten Marvel character that literally shines with expectation. The costume alone could get eyes glancing over to see what is going on. An interesting player in the Marvel universe that would make for some fun screen time. A cartoon would be as colorful as live-action would. Make this happen, Marvel. *First appearance; The Deadly Hands of Kung Fu #22 (1976). This was a Marvel magazine. Jack of Hearts’ first comic book appearance was in The Incredible Hulk #213 (1977). Jack of Hearts four-issue limited series from 1984 is an easy get.
So, you see the love we’ve given? Again, why? Who knows? The first comic appearance is still a mega-cheap pickup. If you have a few bucks laying around, buy it. Maybe it needs to marinate for another 40+ years before it finally takes off, but there has to be a reason Marvel (Disney) refuses to lose the licensing on him, right?
Fantastic Four #42 – Is the variant cover this week a first ‘Ruin’ cover?
Ocean Will Take Us #1 – A new release from AfterShock Comics. It’s Stranger Things meets the water. Written by Rich Douek and drawn by Carlos Olivares.
X-Men Red #1 – Writer Al Ewing and artist Stefano Caselli.
Batman Beyond Neo-Year #1 – This new Batman Beyond series promises to bring new villains on board. Look for a first appearance right out of the gate here.

Spider-Punk #1 – Just like Jack of Hearts, InvestComics spoke up Spider-Verse before and after its inception and made speculators lots of money. Also gave them box items that actually hold their value. Not just a pretty variant cover. Here’s SOME of what we were saying back in 2014; “Week after week I consistently remind collectors that the Spider-Verse storyline is one to keep an eye on. There are a tremendous amount of new characters being introduced and this week is no different. Check out Edge of Spider-Verse #5 with Sp//dr. Looks like Spider-Man has gone Anime. One of these new Spidey’s will break out in a big way and you’ll be kicking yourself for it.” ~ “Spider-Verse is finally officially here with Amazing Spider-Man #9 (2014). So what will a speculator need for this epic Spider-Man storyline you may ask? Besides deciding which cool variant to pick up? Not too many to choose from, which is great. More on the variant craze getting out of control later. But how about the most comprehensive Spider-Verse checklist on the net? From InvestComics of course. Click right HERE and follow all of the characters that are appearing in the story. First appearances galore here. A MUST for anyone seeking out the plethora of first appearances to appear in this mega tale. As I said a long long time ago here on InvestComics about the Spider-Verse saga, there are many spider characters that will and MAY break out into their own series. The speculator needs to stay on top of their game in order to spot the hot character(s) that may spin out onto their own. Spider-Verse Team-Up #1 is also a part of the Spider-Verse madness this week too. All the while using the checklist to find the first appearances via InvestComics, you can follow along. It’s a fun time to be into the Spider-Man universe. A lot going on and to keep an eye out for. Have fun!” ~ “What more can be said on here that hasn’t already been said about Spider-Verse? I have been alerting you for months about how important this saga is. Gave you a heads up on the Gwen Stacy issue too a few weeks ago. It begs to repeat though just in case you haven’t been listening. This Spider-Verse storyline is one of the most important speculation Spider-Man series to come out in quite some time. This isn’t “One More Day”, or “The Clone Saga”, this is a storyline that will introduce and re-introduce every single Spider-Man costume, person, metal armor, and even an animal BACK into the fold of the Marvel universe all at one time. So to reiterate for the millionth time here, what does this mean for the speculator? It means that there is going to be an abundance of breakout characters here. Old and more importantly, NEW! If you are a reader or a speculator, you need to get on every single Spider-Verse book. Anything Marvel throws at us, get it. There will be introductions (and reentries) in books that you were not expecting and BAM the book will blow up because the character(s) suddenly are at the forefront of a new book, or appear in another thus creating a mad frenzy to find that first appearance. I said it from the beginning, the Spider-Verse storyline is a huge marketing monster with tremendous potential to explore and introduce new Spider characters. Do not sleep on these specs. So with all of this stated, Spider-Verse #1 will do all of the above mentioned. The team of Dan Slott and Humberto Ramos begin the awesome series. There are two separate stories introducing two new spider characters. Yes this book, better yet, this series is one to get without a doubt!”
That’s a whole lot to digest. There is so much more, but you get the gist of it. But the real reason(s) we show you this stuff is to make sure you have the understanding of separating the boys from the Goat. We predicted these things with zero play on any movie announcement. Most, if not all of today’s speculation is 100 percent predicated on waiting for the next movie or television blurb. Spider-Punk first appeared in Amazing Spider-Man #10 2014. It popped a while back on the merit that he may appear in the original Spider-Verse film, and then popped again because the rumors started about Spider-Verse 2. Ridiculous really. Spider-Punk’s first appearance, right now, is within the scope of affordability and not absurdity. For now.
Fantastic Four #42 & She-Hulk #3 – We already covered these comics, but we forgot to mention the Carnage Forever covers. A lot of these covers are first appearance covers, so do your own homework and find out if these two covers are first appearances. She-Hulk Carnage and Fantastic Four Carnage.
Strange #2 – The female Doctor Strange character seems to be a semi-hit. We don’t really see this character sticking around that long, but then again, we weren’t a fan of Jane as Thor either, and look how that turned out. We aren’t perfect. But check out this series as it introduces a new villain.

The Joneses #1 – Welcome to the modern-day Fantastic Four from Artist, Writers & Artisans (AWA). This team originally appeared in The Resistance comic series’ someplace. We’re not exactly sure in which issue, but it shouldn’t be that hard to find. The uncensored limited series here will run five issues. Written by Michael Moreci, drawn by Ive Svorcina and Alessandro Vitti.
Black Widow #15 – Marvel is still at it with their X-Gwen variant covers. Many are first appearance covers. A Gwen/Black Widow mash-up here. Again, do your homework, but we’re not remembering seeing this one ever.
Batman #122 – We roll back the clock a bit in a backup story. It features the first-ever fight between Batman and Deathstroke.
Alice Ever After #1 – Alice resorts to a life of crime in order to return back to her fantasy land. This is awesome. Written by Dan Panosian and penciled by Giorgio Spalletta. From Boom! Studios.
Marauders #1 – Another relaunch of this series will introduce a new squad and new characters. Superstar writer Jason Aaron will begin the process, as Juan Frigeri illustrates it.

X-Force #27 – Readers learn all about Cerebrax. Well, maybe not ALL, but its origin is explained. So, maybe it is all?
Captain Marvel Annual #1 – Our Captain is locked away with the Starjammers team. A CGC graded X-Men #107, the first full appearance of Starjammers, recently sold for 2k. Why exactly? Has anyone ever really given a sh** about this team?
Earth-Prime #1 – More heroes/villains from the CW world make it into the comic books.
Deadpool Bad Blood #1 – Marvel’s first-ever Deadpool graphic novel is brought to comic book form with a new Rob Liefeld cover.
West Of Sundown #1 – A western tale featuring vampires, monsters, and zombies. Written by Tim Seeley and Aaron Campbell. Art by Jim Terry. A Vault Comics release.