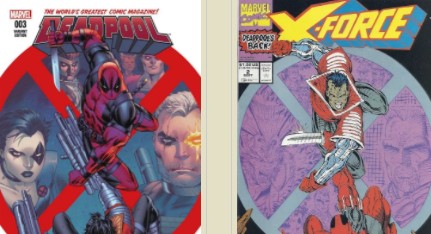 Have you seen the latest contest on the InvestComics Facebook page regarding the new release Batman Teenage Mutant Ninja Turtles #1 coming out this Wednesday? The contest is to WIN a Hall of Comics Ivan Reis variant. This variant rocks. All you have to do is LIKE both the InvestComics Facebook page AND The Hall of Comics Facebook page, then share the post and you become eligible! Enter now! Buy this variant directly from Hall of Comics right HERE.
Batman Teenage Mutant Ninja Turtles #1. So what is there NOT to love here? An awesome Kevin Eastman variant will be available.
This week’s new DC/Vertigo title is a good one. New Romancer #1 will be written by Peter Milligan and art from Brett Parson.
In another Batman book this week, the first appearance of Sculptor(?) in Batman And Robin Eternal #10.

InvestComics gave our fans a heads on on Monstress #1 back in the InvestComics Hot Picks #396 article. Here’s a recap from that article; “There are a few reasons why to love Monstress #1 from Image Comics. First and foremost, it’s written by the talented Marjorie Liu. Second, it’s drawn by X-23 artist Sana Takeda. Third, it’s a new ongoing series, and fourth, it contains 66 (yes 66) pages of comic story with no interruptions. All for a $4.99 price point. There are currently none of these comics available on Ebay right now.” So with all of that, we tell you that Monstress #2 will be out this coming Wednesday. Buy it.
The new Image comic; Symmetry #1 has the looks and the making of a possible sell out. The same can be said about Violent #1. Two Image Comics to look out for this week.

Marvel teases an appearance of Venom Hulk in the new Contest of Champions #3. Hopefully we see this within the pages and not get let down. In case you’re wondering, Venom Hulk first appeared back in 1989’s What If…? #4. The title of the story was “What If the Alien Costume Had Possessed Spider-Man?” In the story, the Alien Symbiote attacks the Hulk and alas, Venom Hulk! So that would be the first appearance.
Not only is there a possible first appearance(s) in Deadpool #3 this week, but the variant cover is a homage to X-Force #2 (1991) by Rob Liefeld. Which happens to be the second appearance of Deadpool. Anyway, the variant cover will be done by…..Rob Liefeld. Paying homage to yourself is sweet. And it’s sold out, that’s sweet too!

One of the hottest Marvel characters at the moment is Gwenpool. Marvel knows this. They know very well. What to do? What to do? Well if you’re Marvel you cash in, hence the new Gwenpool Special #1 comic this Wednesday. Tremendous eye candy from J Scott Campbell (Midtown Comics) and Robbi Rodriguez. The two covers provided by them will make comic fans take notice. If for some reason this comic possesses a key first appearance, it will be an explosive comic. If it doesn’t, it’s still going to sell out and be a good aftermarket book because it’s Gwenpool’s first solo number one comic. Gwenpool fever, catch it.

A dark cover from Valiant Entertainment this week! Ninjak #3. There are 3 different glow in the dark covers to choose from. This is most excellent. Great storytelling and a very cool glow in the dark cover! Yes, we dig it. We’ll also get a final issue Fred Hembeck variant with Unity #25. Legend Fred Hembeck on a Valiant Entertainment comic? Yep! Awesome.
451 Media Group continues to sell out almost every new release. This time it’s Humbug #1. Looks like their version of Doctor Strange.

After-Shock Comics comes back this week with another new release; Insexts #1. Written by Marguerite Bennett and art from Ariela Kristantina. After-Shock will continue to deliver great product due to their creative firepower with their new releases. We are at the beginning of something special here.