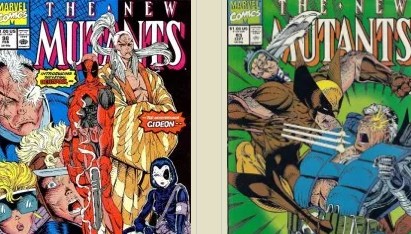 Fans of Image Comics’ Black Magick will be introduced to a new character in Black Magick #3.
The Wytches comic series from Snyder and Jock was a hit. It still has potential to be a bigger hit given the extra interest from a studio eventually. Whether it’s a movie or television, Wytches has that feel that someday it will be bigger, much bigger. This week, Image Comics will feature a black and white pencil only from Wytches #1 in an oversized format of 11×17. This amazing format and eye candy will be called Image Giant-Sized Artists Proof Edition Wytches #1. A must get for comic collectors and fans alike.
Spawn will face his greatest adversary that he never faced before! Yep. In Spawn #259, The Satan Saga Wars begins. The title of this event pretty much sums up who Spawn will be facing off against for the very first time ever. Satan. The Todd McFarlane cover is great, as is the Erik Larsen/Todd McFarlane cover. Spawn fights Satan, this is gonna be good.

Who are the Four Sisters? Find out in All-New Wolverine #3. And that Mike Choi variant is nice.
Mr. Negative will be causing all sorts of problems for Spidey in Amazing Spider-Man #6. Did you know that Mr. Negative first appeared in Free Comic Book Day 2007 Spider-Man comic? Now you know!
Two stellar covers for the new Carnage comic this Wednesday has to be mentioned here. The eye candy from Carnage #3 features covers from Mike Deodato and Yasmine Putri. Fantastic.
Marvel goes back to the well this week with Deadpool And Cable Split Second #1. Back in 2004, it was Cable who got first billing in the monthly comic; Cable and Deadpool. That series lasted 50 issues. Times have changed and the money is with Deadpool these days, so the Merc gets first billing now. Did you know that Cable first appeared with Deadpool in New Mutants #98 (1991). Maybe you heard of that issue? Anyway, Rob Liefled had an obvious hand in creating these characters so it’s natural we would get a variant for the new title from him. Seeing that fight cover from Rob, it brought us back to our favorite fight cover; New Mutants #93 (1990). Rob had Wolverine all over Cable on that one. Fun times, fun comics.
While we’re on topic about Rob, he creates the variant cover for Howard The Duck #3 with Gwenpool on the cover. A $60 retail variant. Yikes that is a bit steep! A very very nice variant from Rob nonetheless.
Marvel (Disney) will continue to milk the Star Wars franchise. Nothing wrong with that really. Disney is in business to make money and they are producing a good product, not crap. Check out another new Star Wars comic; Obi-Wan And Anakin #1 this Wednesday. Lots of variants to choose from.
Rocket Raccoon and Groot #1 should be all kinds of a fun read. That Todd Nauck Deadpool Incentive variant is neat.

Alterna Comics will give fans a holiday special this Wednesday. A rare Special Edition graphic novel limited to only 750 copies! Yes that’s correct, The Chair novel will only have only 750 available copies! If you want a copy you best get it quick because by the end of this sentence they are most likely sold……out.

That Batman Europa #3 Francesco Mattina incentive cover is quite awesome.
Another DC title to definitely check out this week; Injustice Gods Among Us Year Four Annual #1.