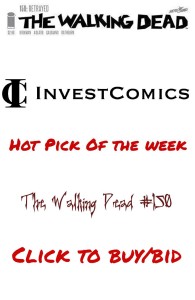 This week’s IC 100 Club Pick is Bloodshot #6 (1993) graded 9.8. This comic is the first appearance of Ninjak. Valiant Entertainment is on the cusp of breaking loose within the film industry. Is it possible we will see Ninjak make an appearance? Maybe. If so, here’s a book to grab for $100 with free shipping.

Creators Brendan Fletcher, Dustin Nguyen and a host of others usher in a new beginning for the Gotham Academy. Check out Gotham Academy #14 as the book starts its “Yearbook” story line.

Although the Joker’s Daughter has appeared in the previous 2 issues of Red Hood Arsenal, she gets the front cover this week on Red Hood Arsenal #8. It’s been a little while since we’ve seen her grace a cover in an almost solo capacity. With DC using the character a bit more these days, are they gearing up for a mega-push? It’s quite possible. The female hero/villain in comic books is a hot commodity for many comic publishers these days. DC might push for this particular female character to get going. Get Catwoman #23 (2013) and Catwoman #24 (2013) now before it’s way too too late. That is the cameo and first appearance of Joker’s Daughter. Some low rates for these comics on Ebay right now. Get em!

Wonder Woman fans will have a new series to check out this Wednesday. Legend Of Wonder Woman #1 will be a 9 issue mini-series.
DC Comics over the course of the last couple of weeks have been releasing “adult coloring book” variant covers like Starfire #8. Although they do resemble sketch variants, these are ones that DC encourages us “adults” to color on. Why exactly? How many “adults” are really going to do this?
Speaking of covers, we’re really digging the Robin War #2 incentive cover by Lee Bermejo.

The Walking Dead reaches its 150th issue this week. There are so many variants it’s hard to keep up, but there is one we want to talk about. Besides the ultra cool Ryan Ottley variant cover, Tony Moore contributes a variant. Yes THAT Tony Moore. the co-creator of The Walking Dead. The last time Tony penciled a cover for the regular ongoing Walking Dead series was back in 2005; The Walking Dead #24. The Walking Dead #150 will be an obvious huge seller, but the Tony Moore variant is the prize. Did we mention it’s sold out already? Better get yours if you want one. Oh and one more thing, InvestComics may have a HUGE contest in regards to this comic in the works. Stay tuned to our Facebook page AND our Contest section on the site right HERE. It may happen, it may not, but IF it does, Walking Dead fans will love it!

The new Agents Of S.H.I.E.L.D. #1 comic will be based on the television series. If you’re a fan of the television series, this comic is for you! If not, this comic is NOT for you! Simple enough right? This series has no chance on the longevity scale at all. The television series will not last as long as Bonanza did and the comic series will succumb before that TV series does eventually. We’re not hating on the series, but it will thin out as most of these types of shows do. Let’s face it, they’re not bringing it like the DC television shows are. Flash, Green Arrow, and Gotham. As we pointed out last week with the random Doctor Strange #4 Deadpool variant, must be some stalled sales going on there to throw Deadpool on a variant like that. Well within the plethora of Agents variants, Mark Bagley provides a Deadpool variant. Very random once again. Very unnecessary, but a great cover nonetheless.

Deadpool also appears on a very funny variant cover from Tom Raney. Check out All-New Wolverine #4. The cover is a take on the Batman slapping Robin meme that floats around all of social media.

Another Deadpool variant; Guardians Of The Galaxy #4 shows Deadpool riding on some sort of Mindcraft thingy. If you don’t know what Mindcraft is, Google it. If Marvel ever decides to take on the license of Mindcraft (maybe it already has it? Who knows?), this comic is the first Mindcraft Marvel. Maybe the first Mindcraft deal in all of comics? Haven’t seen other references, so help us out if you have. **(Update – apparently Deadpool is riding an Internet meme called a nyan cat. Thanks to Barry W for clarifying this).

If you’re in the market for an all out “magic” comic book, then IDW’s Gutter Magic #1 is for you. Witness an all out magic war set in New York City. Brought to you by writer Rich Douek and artist Brett Barkley. Great storytelling and great art. This will be a hit for IDW Publishing.

Also from IDW this Wednesday, Luna The Vampire #1. This will be a fun comic to check out.

An original Kickstarter campaign starter becomes a regular monthly title from Dark Horse Comics. Leaving Megalopolis Surviving Megalopolis #1 is written by Gail Simone with pencils by Jim Calafiore. The original concept of the “heroes” in this book stop being good guys and become very bad. Writer Gail Simone will bring us a great tale because she can flat out write. And veteran artist Jim Calafiore is showcasing some of his best work ever. This looks like a great read, a must get.