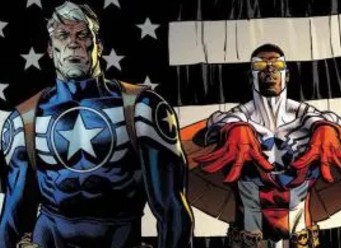 We have two IC 100 Club Pick’s this week and they’re both under a $100! Now that’s good stuff. The first comic is Machine Man #1 9.6 (1978). This Bronze Age comic is graded by CBCS. It’s only $50! Legend Jack ‘King’ Kirby provides both the cover and the interior for Machine Man’s first series. This comic is also the first time the character is referred as ‘Machine Man’ and not Mr. Machine. A $50 bill grabs this gem.
The next IC 100 Club Pick is 1st Issue Special #5 8.5 (1975). Another All Kirby issue that includes cover and interior art. This beautiful 8.5 graded CBCS comic is the first appearance of Mark Shaw, a.k.a. the Manhunter. A first appearance high grade Bronze Age comic from Jack Kirby for $50?? AND free shipping?? You better click that Image or the RED link and buy this before it’s gone!

Have you seen the latest InvestComics Checklist that came out this week? Bullseye!…right HERE.

Creator Joe Harris will write the new Image Comic; Snowfall #1. It’s an extra paged comic at the same $3.99 price point. We all love that now don’t we?! Joe is an obvious talent, a fabulous writer, look for this comic to do well.
A beautifully done variant from Rafael Albuquerque; Huck #4 (Image Comics). Rafael pays homage to a famous movie poster. If you don’t know what movie by looking at this cover, well that’s too bad.

Sticking with the cover theme, Neal Adams returns once again this week with his DC Comics variants. Neal is still on top of his game. These comic covers are fantastic; Robin Son Of Batman #9, Martian Manhunter #9, Harley Quinn #25 (The Amanda Conner cover is awesome too), Titans Hunt #5, Sinestro #20, and finally the awesome Wonder Woman #49 cover.
…..And about that Wonder Woman comic. Korean artist extraordinaire Kim Jung Gi will pencil a story inside of this book. He’s a tremendous artist and he hasn’t done much of any mainstream work in the comic book industry (Marvel/DC/Image/Etc). One of the only comics we could find that he’s done is Flash #33 (2014). He’s credited as the cover artist here. And it’s a fantastic cover too! One more thing, Wonder Woman #49 (Neal Adams) is sold out.

The Mighty Thor #4, Adam Hughes variant is sold out. He’s a skillful chap.

Watch for Squadron Supreme #3. A Marvel character returns. But who?!? Read and find out!
So what exactly is Avengers Welcome to Pleasant Hill #1 about? Read and Find out!

Anytime you see creator names like; Jack Kirby, Joe Simon, Al Williamson, and Bob Powell it stands with good reason to know you’re in for some nostalgic goodness. Race For the Moon is a one shot from Canton Street Press. It reprints (restores) stories from yesteryear with some greats. It’s sold out.

Artist Joe Benitez starts on a new series; Wraithborn #1 from his label Benitez Productions. This story looks interesting and Joe’s art is always on point. One to look for on Wednesday. The very first appearance of Wraithborn was in 2005 under DC’s WildStorm Signature Series; Wraithborn #1.

Here are some other great indie number one comics to look at this week. A second series here from Dynamite Entertainment; Grumpy Cat and Pokey #1. Shikari Force Hunters #1 (Graphic India), and Dusu Path Of The Ancient #1 (Stranger Comics).