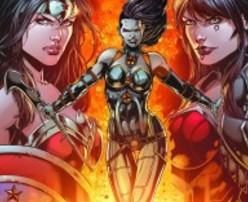 Each week InvestComics seeks out a comic(s) on Ebay for $100 or less and then brings it to the attention of our fans. We call it IC 100 Club Pick. The idea is to get a great book at a great price. We do not own nor are we selling these comics. The comics are found by a random process. We do not know the ebay seller(s), nor are we promoting the Ebay seller. Any knowing from the Ebay seller of InvestComics or its affiliates in purely coincidental. (See disclaimer for more details)

IC 100 Club Pick: Showcase #75 (1968) 7.0. This comic represents the first appearance and origin of Hawk and Dove. Story, cover and interior art from the legendary man himself, Steve Ditko. A 7.0 grade for only $90, with FREE shipping, gets this beauty in your hands. This a must in your collection.

Look for writer Mark Millar to turn things upside down with the debut of Empress #1 from Marvel’s imprint Icon. It’s already getting billed as Marvel Comics version of “Saga”. And we all know how Saga turned out. Mark will introduce fans to a whole new sci-fi world. Hollywood LOVES Mark Millar and we wonder if Marvel Studios would ever pick this up and run with it. Who knows? It could happen. Either way, this is an introduction comic in the vein of Saga, one to watch for here! This will be big.

The new Black Panther series makes its debut this week; Black Panther Vol 6 #1. The longest running Black Panther series lasted 62 issues. Many limited series, one shots, and team-up books over the span of six volumes for the character. Will this series ever make past 62 issues? We’ll see. But the first issue here is accompanied by an abundance of variants to choose from. Pointless, and the need for 13 different covers (at last count, probably more) is a bit excessive. The creative team makes for a must get though. Writer Ta-Nehisi Coates and artist Brian Stelfreeze will bring fans back again and again.

Marvel will introduce a new Star Wars character into their library. Star Wars Poe Dameron #1 will have the first comic book appearance of Poe Dameron. Poe appeared in the latest Star Wars flick and now he makes his way into the funnies. Regular InvestComics readers know how we feel about the Star Wars comics. Buy them all! This one here is so obvious that if you miss it, shame on you! Besides Empress #1, this is the other big Marvel book this week.

This week’s Justice League Darkseid War Special #1 will focus on Darkseid’s daughter Grail. A book simmering in the back issue bins on Ebay is Justice League #40 (2015), the first appearance of Darkseid’s daughter Grail. With DC maybe headed towards a Darkseid movie appearance, who’s to say they won’t take a page out of Marvel’s film franchise and include his daughter, a’la Marvel’s Nebula (Thanos). Right now JL #40 might be a gimme at $15….the same price as some worthless variant this week. Maybe getting Justice League #40 instead of a pretty cover makes more sense. Just saying.
There are plenty of DC comic covers by John Romita Jr. to choose from this week. DC is proud to have John Romita Jr. on their side instead of those “other guys”. Some may say or think this is the first time John is playing for the other side, but fans of InvestComics know we’re going to do our research! John Romita Jr. first drew some DC characters back in 1994. Not just “any” characters, he penciled Batman, Robin, Joker, among some others from the DCU. The comic was Batman/Punisher: Deadly Knights. Art by John Romita Jr. and written by Chuck Dixon. John also contributed to the awesome cover. Great comic, great story, Romita Jr.’s first DC work.

While on topic regarding DC’s past history. Bloodlines #1 debuts with writer J.T. Krul and artist Kenneth Marion at the helm. Bloodlines was a huge crossover storyline that took almost 6 months to hammer out back in 1993, spanning from August to December. The very first Bloodlines book was Lobo Annual #1 Bloodlines Outbreak. This comic introduced the Bloodlines Parasites.

Mr. Jim Lee will provide artwork for this week’s winner of the longest comic book title; Harley Quinn And The Suicide Squad April Fools Special #1. Yes, THE Jim Lee will be penciling this comic. The Lee sketch cover is already sold out.

Injustice Gods Among Us Year Five #7 features the first appearance of the NEW Nightwing.
It looks like Superman #51 could possibly introduce some new characters within its major new storyline crossing over all of the Superman titles; Super League Part 1 begins here. Keep an eye out on this series for new characters and villains.
Green Arrow will battle Deathstroke in Green Arrow #51. Fantastic covers from Patrick Zircher (regular cover) and John Romita Jr. (variant).

Scout Comics has a hit on their hands. InvestComics has mentioned each and every single issue of Henchgirl since its inception. Now Henchgirl #6 is sold out. We have told you again…….
New After-Shock comic this week from Adam Glass and Pat Olliffe; Rough Riders #1.