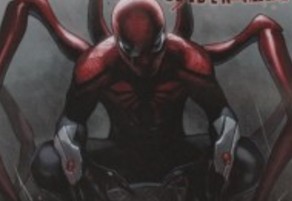 Gotta love that new Gwenpool #2 cover. DC Comics gives fans a parody character of Deadpool a few weeks back; Red Tool. Now Marvel has this cover of Gwenpool on the cover resembling a certain DC character that welds a big hammer most of the time. Sometimes a baseball bat or whatever she can really get her hands on, but preferably that really BIG hammer is usually her “go-to”. Make of the cover what you will, but that sure does look like that DC girl. One more thing, the Gwenpool #2 Reilly Brown incentive cover is sold out.

Marvel Comics introduces yet another character on one of their covers. Seems like a trend now each week doesn’t it? Boy they market so well, catering to the comic collector. Silk #8 will feature Silk The Worthy (Silk as Thor). May never amount to anything, but the thing is, they seem to nail awesome looking characters! Create the character, the demand may come, a follow up on making the character a part of the actual Marvel Universe and there you have it, an introduction on a comic cover.

Writer Ta-Nehisi Coates of the new Black Panther series will probably make readers realize that his particular take on this character is unlike anything they’ve ever read before. Black Panther #2 comes out on Wednesday and will prove this point even more so. The Midnight Angels make an appearance to stir things up a bit. The Midnight Angels first appeared way back in 2010’s Doomwar #5, a comic that features lots of guest spots including Deadpool. And Black Panther, of course. Marvel’s new Apocalypse variant covers are killing it too these past couple of weeks. The Apocalypse Black Panther #2 variant is proof of this.
….And Dale Keown’s Guardians Of The Galaxy #8 Apocalypse cover is ridiculously wonderful.

Web Warriors #7 features a character we told you about a while back. We wrote about the possible breakout of this character someday. Well, maybe the time has come now. Spider-Punk makes his way back into the pages of a Spidey related book. Spider-Punk first appeared in Amazing Spider-Man #10 (2015). You already knew this because you follow InvestComics and realize we are the best thing since sliced bread. Maybe sliced comics. No, no, don’t slice your comics, not good.

Marvel will introduce Grant Ward into the Marvel Universe this week. See that happen in Agents of S.H.I.E.L.D. #5.
Staying on topic of introducing characters in the Marvel Universe, take a look at All New All Different Avengers #9. This issue will introduce the All new Wasp! The regular and variant Alex Ross covers kick as*.
Venom Space Knight #7 may introduce a new foe. Or it features more depth on a newer character. Check this one out to reaffirm.
Another week, and more Star Wars comics to read! Darth Vader #20 begins a new story arc and begins a backup story with Triple-Zero and Beetee.

There are many DC covers paying homage to their own series this Wednesday. With many issues hitting that proverbial 52nd issue, DC will regurgitate the covers from it’s premiere issue in its own series with issue number 52. It all seems so contrived at this point with the New 52 in so many ways. Homage to a number one issue from 51 issues ago? Really?? Okay.

Learn more about the new character Harley Sinn introduced in Harley Quinn and Her Gang of Harleys #1 in this week’s Harley Quinn and Her Gang of Harleys #2.
Check out a major status quo change in Selina’s life coming up in Catwoman #52.
Fans could possibly witness the death of Superman this week. Again. Who cares? It’s all in good fun storytelling. Check out Action Comics #52 as Superman from pre-New 52 meets up with the current Superman. Only one may survive.

Satellite Falling #1 from IDW Publishing will appeal to sci-fi fans, so get your read on.
Image Comics’ Fix #1 sold out last month, pick up Fix #2 if you missed that first issue and see what you may be missing. Then pick up Fix #1 by clicking our link!

More Indie’s you must check out this Wednesday.
Creature Entertainment releases Forgive Me Father #1. Written by John Ulloa, art from Ulises Carpintero and Greg Narvasa. Check out this second volume from CE. It’ll be a great read indeed.
We love the eye candy cover from After-Shock Comics’ Jackpot #2. We have Brian Stelfreeze to thank for that. Thank you Brian!
Frontlines Requiem #1 (Jet City Comics) comes from a best selling novel. A four issue mini written by Ivan Brandon and art by Gary Erskine.
Writer Stefano Martino (Doctor Who) scribes Alan Dracon #1 (Amigo Comics). It’s sold out. Amigo Comics also delivers Unleash #1 on Wednesday. Two comics to check out from them!
Penny Dreadful #1 (Titan Comics).