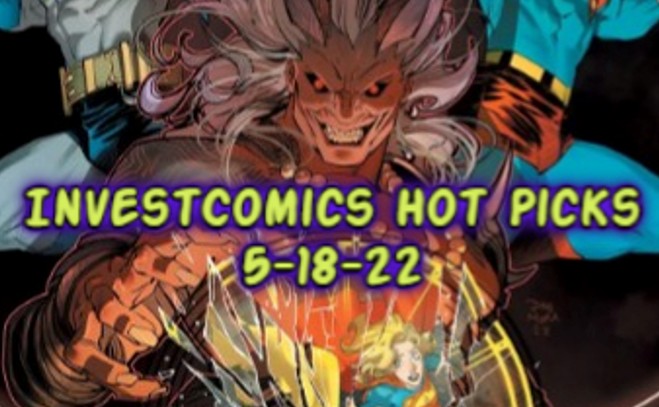 Here are this week’s top Trending/Spec Comics out this Wednesday 5-18-22.
Please note: All new comic releases can and will change release dates from time to time. Check with your local comic shop on the guarantee of arrival time. If ordering from eBay, check with the seller or post details.
Like something we’re talking about? Like a cover? Like the debut of a new series? A first appearance?
Click on ALL Red-Highlighted LINKS/Comic Covers to BUY/BID from ALL available eBay sellers now (always buy from high-rated eBay sellers). 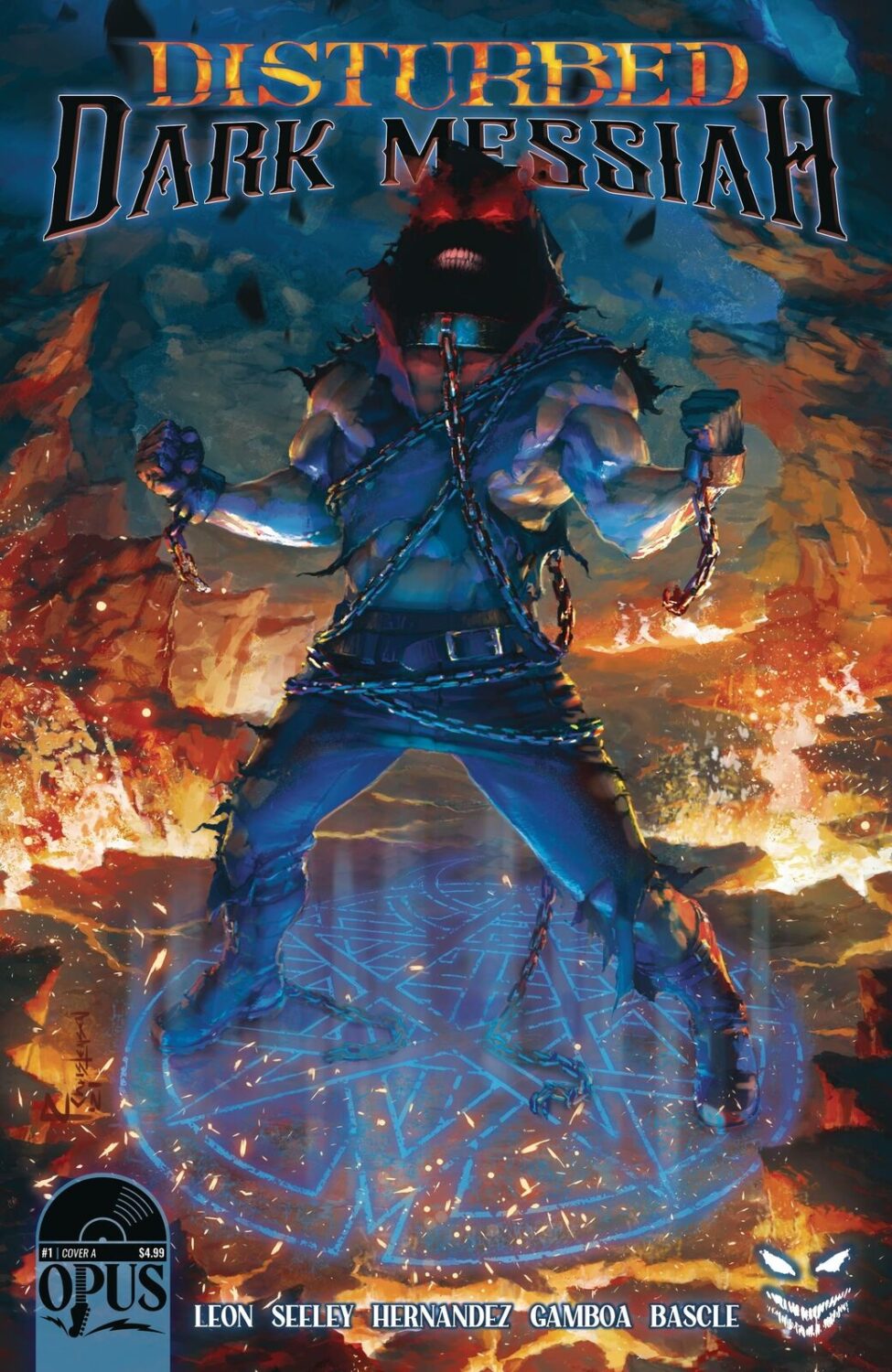 Disturbed Dark Messiah #1 – New series from Opus Comics. Writer Tim Seeley (horror extraordinaire) and artist Angel Hernandez.
Shadow War Zone #1 – This special one-shot(?) will introduce a new villain named Angel Breaker. The Howard Porter X-Men homage cover is dope too. A most definite buy here.
Worlds Finest #3 – The first full appearance of Devil Nezha and the new Chinese villain team known as The House of Ji. This will be a hot comic right off the shelf. A second print will be almost certain here. You best get a copy quickly if you want a first print.
Savage Avengers #1 – If you are a regular visitor to these here parts, y’all know how we feel about the constant barrage of “unnecessary” number one issues. By “unnecessary”, we are referring to the canceling of a title, just to release another number one issue soon after. Why not just continue the series with a new storyline? Well, that wouldn’t be good for the dunce speculator now would it? A new number one comic??!!!?? MUST HAVE IT! Joking of course, but not. These number one issues do not bring the lure they once held. There are simply too many relaunches and variants accompanying them that it truly has become more meaningless in the grand scheme of collecting. Unless, unless of course, there is a caveat. What the said publisher has to do is bring a meaningful reason for a speculator to come to the light. In this particular case, in this new number one restart

comic, Marvel will throw in a bunch of the hottest characters to arrive within the last few years onto a team book. With one of the newer hot characters to entice the speculator even more so. Let’s take a look at three of the members of the Savage Avengers. Weapon H (Hulk with Wolverine claws); first appeared in Totally Awesome Hulk #22 in 2017. Boy was this comic mucho mucho hot back then. A CGC 9.8 recently sold for $114. You could look at a raw copy at one time for that price, let alone buy it for that price. Tank city, but if you follow us, you’d know to chill with that stuff. Anti-Venom; first appeared in Amazing Spider-Man #569 in 2008. A CGC 9.8 recently sold for $177. The second print with Anti-Venom on the cover, first cover appearance, CGC 9.6 sold for $500 recently. More proof this hobby is way upside down. A CGC 9.8 is about $1500. An absolute joke. If you’re a true speculator and know this landscape, it’s laughable that a second print of a comic from 2008 commands that kind of money. This said, money is great and if you have it, sell it, make that money. These are not as hard to come by as the masses would like to tell you they are. Next up, Elektra as the new Daredevil; she first appeared in Daredevil #25 last year. There was the usual pop in price, but then like most new characters introduced in this market, it took a quick dip. A CGC 9.8 recently sold for $139. With some of the second and third prints going for the same as if not close to the first print prices. Well, there you have it. Three of the rather newer editions to the Marvel Universe in the new Savage Avengers lineup. With all of this said, it’s quite obvious these characters, including Elektra (as Daredevil), have all cooled down some. Maybe this will jump-start their career once again? Who knows? Cloak & Dagger, Deathlok, and Conan round out the rest of the All-New Savage Avengers team. We’ve covered them countless times since 2005, so you should be up to date on them.
78 MPH #1 – An interesting concept here. Anyone that moves slower than 78mph will essentially die by burning to death. True story. New from Red 5/Stonebot comics.
Marvel releases two more Spider-Man mash-up first appearance covers this Wednesday. Are these TRUE first appearance covers? Not quite certain but certain, so do your own homework. Spider-Man as the entire Fantastic Four #43 & Spider-Man as some hot babe, Immortal X-Men #2.

My Brother Teddy #1 – New from Source Point Press.
A Town Called Terror #2 – We spoke about the premiere issue and we’re here again. Why? Because writer Steve Niles and artist Szymon Kudranski, that’s why. Mr. Niles is one of the horror writing GOATS and Mr. Kudranski is crazy talented. This series will be Phenomenal as it progresses. The first issue arrived with a special “thank you” cover, one per comic shop. That’s not the good part, the good part is figuring out how many comic stores there are on planet earth, maybe 2800? 3000? Now figure out how many shops actually did receive this special book, because not all shops ordered the first issue, then go to eBay and buy it for only $15. That’s not bad at all. A limited book indeed. Buy yours by clicking right HERE.
Marvel Voices Identity #1 – Marvel continues their heritage-themed comics this week with another number one issue. This one is a continuation of sorts. The comic will RE-focus on the Asian American Marvel library of characters. The last number one issue featured a first appearance, will this one do the same? Maybe. Either way, you’ll still receive a book full of fantastic Asian American comic creators as well as an array of Asian American comic characters. A win-win here.
Duo #1 – Here is a first appearance number one self-titled comic. Writer Greg Pak (Planet Hulk Universe creator) introduces readers to Duo and a cast of other characters in this new universe. Artist Scott Hanna and Khoi Pham help the cause. This new series will sell out because of the creative super-power attached to it. Another reason it’ll sell out is because of the interesting story here. Here’s what DC says, “A husband and wife awaken to realize they share one super-powered body.”
Paradise Towers Paradise Found #1 – New from Cutaway Comics.
The Fox *Family Values #1 – New from Archie Comics. Is this a new comic regarding the cable network? Nah, just messing.

Here is the latest LIVE CSSully Twitch video: [NerdsUnite] Fri-YAY the 13th!
The CSSully Twitch channel airs various LIVE episodes throughout the week and is must watch. LIVE gaming, giveaways, Art, NFT talk/knowledge, contest, shout-outs, in-show purchases, and so much more. Click on the CSSully link and subscribe now.