Hard to believe that after this new comic book week that 2012 is almost half over already. And what a year it has been so far. Although some may say that December will be the last month of all time, we want to be positive here and believe we’ll see the next chapter within the Avengers movie saga…..

The next movie is going to be epic in so many ways it’s unreal. Simply because of one character and where Marvel will begin to turn its attention. The door has been opened with that smirk of evil after the credits. As said in previous InvestComics articles and Hot Picks for many years, the Marvel Cosmo’s will in fact be the next “Star Wars” of the “outer space” movies. The character Thanos will be the next Darth Vader. Loath him as we all will, but we’ll love him. Who will be Luke? Silver Surfer maybe? How about Captain Marvel? The heroes to choose from are absolutely countless.

The idea that Marvel will pursue their Cosmic Universe is pure speculation here. But why wouldn’t they now? The foundation has been set with one single look from one of the most evil, narcissistic, possessive villains within the Marvel Universe, but his mainstay is within the Cosmic side. Marvel began bringing their Cosmic Universe back to the forefront with a very well put together Annihilation storyline. The Marvel Cosmo’s are about to make another run here and we’re on top of it here at InvestComics.

This week we will cover many of the first appearances from within that vast universe that Marvel has put together. A lot has to be owed to Jim Starlin in regards to help shape this Universe. The Cosmo’s would NOT be the same without HIS creation of Thanos and storylines. It would look and feel vastly different if not for Jim Starlin. Do not kid yourself; Thanos is the center piece of this alternative Universe. If he wasn’t so important, or an integrate part of the grand scale of things, why is he in that last panel in the Avengers movie? If you have not seen Jim Starlin’s Video interview on InvestComics TV, you should really check it out. It so happens that in a case of irony if you will, Martin Pierro of his publishing company Cosmic Times  team’s up with me to conduct the Interview. Martin is also the creator of the successful West Palm Beach comic book show called PalmCon. Do yourself a favor and check that out if

Below you will find an abundance of comic books featuring the first appearances of many Marvel Cosmic characters. These are not by any means all of them, it’s just a guideline list of some that may or may not ever appear in a Marvel Cosmic movie. Rocket Raccoon; although he has been covered before on InvestComics, Actually…… look for Marvel Preview #7 (1976) if you want Rocket’s first. Many of these comics are at a very affordable price’s right now. Get your hands on these at the next Comic show or your local comic shop. You’re sometimes better off getting these at the comic conventions due to the fact that many dealers will make deals with you on a lot that you buy. So with that, let’s check out some more first appearances in no particular order.

Iron Man #55 – The Mecca of everything  Cosmic. The First appearance of Thanos. This comic has been one of the most recommended comics on InvestComics for many years. If there was ever one comic to buy for your collection right now, this would be It.……Or would the next comic be?

Marvel Super-Heroes #12 – Featuring Captain Marvel! The first Captain Marvel. Yes folks, this too needs to be in your collection as of yesterday. If there was ever one comic to buy….no wait, said that already. Well you get the idea here. If Marvel plays their cards right here with the Cosmic movies, Captain Marvel would be the answer to DC’s Superman. Imagine if you will, with all the feeble attempts that DC has tried now with making the “right” Superman movie how Captain Marvel will outdo that character on the screen its first time out. That would be instant victory for the House of ideas (no not InvestComics, Marvel). The potential upticks here for Captain Marvel is simply astounding. Buy this.

Fantastic Four #48 – There needs to be a story told right? In general, in life….even if the stories exist in your own head, it’s still being narrated by ….you! So the question here is, who tells the story when we’re gazing into the galaxy that fills the movie screen? The Watcher of course! Check out his first appearance here. Oh yes, almost forgot. Buying this comic would be a three for one deal. Silver Surfer AND Galactus also make their debut here. So let’s recap here.

Buying this comic will get you the narrator of our cosmic films, the possible headlining star and a character that will NOT be a purple cloud next time around? Buy this pronto.

The Infinity Gems – It’s very safe to assume that Thanos will be seeking the gems in the second Avengers film. Here are some of the comics that feature the first look at these gems that the madman craves. Power of Warlock #1, Marvel Team-Up #55 and Avengers Annual #7.  Seek those before Thanos finds them first, we don’t want that!

Incredible Hulk #234 – First appearance of Quasar. Hey one never knows if he’ll ever pop up someplace!

Captain Marvel #27 – Jim Starlin revisits this character in one of his many creations later in a historic graphic novel called The Death of Captain Marvel. Death first appears here.

The Cosmic Cube – Another handy item Thanos would love to wrap his purple hands around. Get the first look at the Cosmic Cube in Tales of Suspense #79.

Secret Wars #1 – The Beyonder makes his debut here. If you do not own this limited series, well then you’re not really a comic collector.

X-Man #15 – First appearance of Onslaught. This character sure reeked a lot of havoc over the years.

So there is a nice list to get you started. Who would you include on this list? Don’t be shy, let your voice be heard!

Okay so let’s take a look at a few comics heading your way this week shall we?

DC’s new 52 will introduce us to the new Mr. Freeze in Batman Annual #1. This villain originally appeared in Batman #121 back in 1959. DC also gives back to the kids again this week with two new “kid friendly” titles. Superman Family Adventures #1 and DC Nation #1. And the last of the number one issues to check out this week from DC is Ravagers #1.

Two independent number one issues to seek this week; Grim Leaper #1 from Image Comics and my very own Vincent Price House of Horrors #1! Yes the First work ever from the owner of InvestComics! Hopefully there will be no delays in this comic coming out, but if you buy the comic and would like it signed, send it to me and 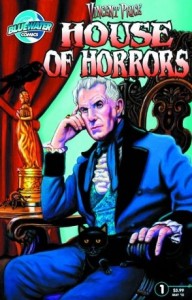 I’ll send it back signed for you! Contact me at jaykatz@trendingpopculture.com so that we can get that done!

That’s it for this week. Invest wisely.