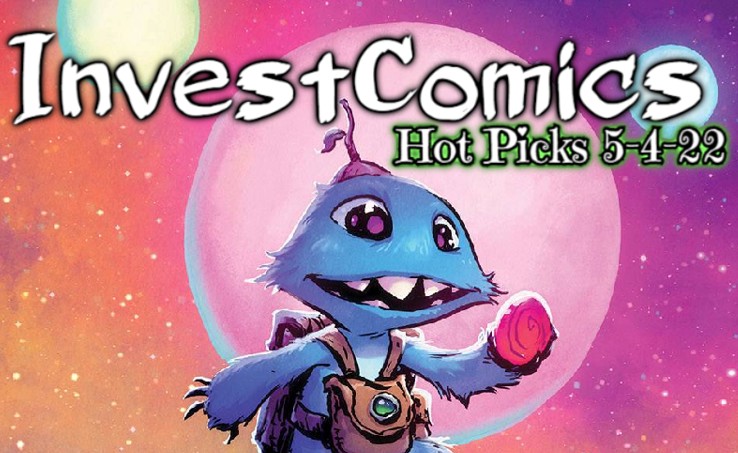 Here are this week’s top Trending/Spec Comics out this Wednesday 5-4-22.
Please note: All new comic releases can and will change release dates from time to time. Check with your local comic shop on the guarantee of arrival time. If ordering from eBay, check with the seller or post details.
Like something we’re talking about? Like a cover? Like the debut of a new series? A first appearance?
Click on ALL Red-Highlighted LINKS/Comic Covers to BUY/BID from ALL available eBay sellers now (always buy from high-rated eBay sellers).

Teenage Mutant Ninja Turtles #128 – The first full(?) appearance of the original first female Ninja Turtle, Venus. Venus appeared in the 90’s tv show and will make her appearance(s) from issues 127-130.
Twig #1 – A new miniseries from writer Skottie Young and artist Kyle Strahm. The first appearance of Twig. This premiere issue from Image Comics will be headed to a second print the day after new comic book Wednesday.
Metal Society #1 – Image Comics is billing this new miniseries as “Blade Runner meets Rocky.” That’s quite a build-up to live up to. Writer Zachary Kaplan, artists Marco Lesko and Guilherme Balbi will do the honors in keeping to the word in this solicit.
Spider-Man 2099 Exodus Alpha #1 – It’s almost unfathomable that Spider-Man 2099 first appeared 30 years ago. But it’s true. A new story debuts this Wednesday from Steve Orlando (writer) and Paul Fry (artist).
Batman #123 – The backup story is definitely going to be a page-turner and a visual that’ll hopefully stick in our brains. Imagine Deathstroke gets infected with the Joker toxin. Imagine no more, it’s gonna happen and it will be totally badass.
Star Wars Obi-Wan Kenobi #1 – Obi-Wan year 1 anyone? This series will focus on Obi-Wan recounting some of his battles, including in the way back machine when he was just eight years old. Do we all want to read this? Okay.

Giant-Size X-Men Thunderbird #1 – Educate yourself on the NEW Thunderbird. In his own giant-size X-Men comic? Guess there is much to learn about?
Batman Killing Time #3 – We dive deeper into the new villain “the Help.”
Danger Street #1 – A story featuring some of the rather more bizarre/c-list players in the DC Universe. Lady Cop, Creeper, Manhunter, and The Green Team. A new mini-series from writer Tom King and artist Jorge Fornes. Tom will deliver the goods here. As he always does.
Nubia Coronation Special #1 – Witness the first telling of the origin of Nubia in this one-shot special.
Dogs Of London #1 – new series from Afterschock Comics. Writer Peter Milligan and artist Artecida.
Spidey And His Amazing Friends #1 – Free all-ages comic book day sampler.