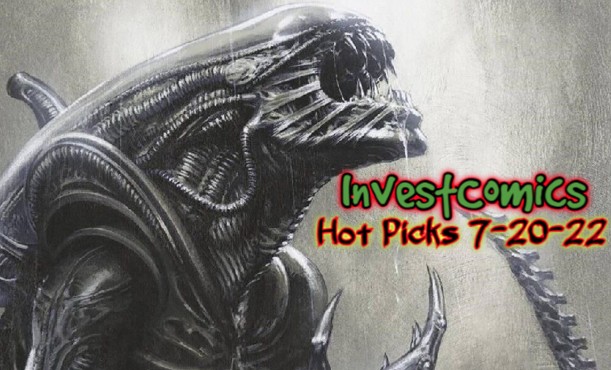 Here are this week’s top Trending/Speculative Comics out this Wednesday 7-20-22.
Please note: All new comic releases can and will change release dates from time to time. Check with your local comic shop on the guarantee of arrival time. If ordering from eBay, check with the seller or post details.
Like something we’re talking about? Like a cover? Like the debut of a new series? A first appearance?
Click on ALL Red-Highlighted LINKS/Comic Covers to BUY/BID from ALL available eBay sellers now (always buy from high-rated eBay sellers).

Skybound X #25 – An array of first appearances here, plus a solo Battle Beast story. Some of the first appearances hit right on the variant covers. The Kroma first appearance story and cover are our favorite. The “Scrurry” story from Mac Smith dons its own awesome cover as well. The Battle Beast gets a tryout here, a test of the waters, to see if the super-duper creative Invincible team of Mr. Robert Kirkman and Ryan Ottley can strike lightning again. With the more recent success of the Invincible cartoon series, Image Comics gives fans a solo story of a villain that first appeared in Invincible #19 in 2004. Where this all really leads to is anyone’s guess. The 2004 first appearance of Battle Beast recently sold for an astounding $430.00. Absolutely zero reasons for that comic to be this high in real life, but we’re in a different speculation space right now, right? Look for this price to come down further and maybe grab yourself a copy because, again, who knows where anything leads these days. In the meantime, the new Skybound X comic is cover price!

Alien Annual #1 – We’re not sure how many times we have to reiterate our educational course on the “new” Alien franchise (AND Predator) regarding the comic book hobby side of it, but we’ll go over this again for the new people in here. Here is the short and long version.
Disney bought Fox Studios a while back. They acquired a bunch of obvious franchises they’ve never had before in their comic book library. Two being Alien and Predator. Since their acquisition, up to recently, they haven’t done anything regarding these two fan-favorite franchises at all regarding any visual media. Maybe a toy? It’s possible the toy makers already had deals set in place, so that’s why the outsourced figures, statues, etc have come out? No clue, and don’t care actually. But as far as media goes, Disney finally broke their silence and started up their first ever Alien franchise release with a few Marvel variant comic book covers a very tiny while back. Then the Alien comic book series came out. Disney is using the same approach with the Predator franchise. Sporadic variant covers here and there and then the release of their Predator title. So, regardless if you like the stories or not, what you are witnessing is the birth of already extremely successful franchises at their infantile stages. When that Alien ride or that Predator horror maze happens at a Disney theme park one day, you can say you were there for the beginning of their adventure. But in all actuality, who cares about that? We care about the speculative side. Once Disney figures out exactly how to utilize these violent monsters into Mickey’s framework without disrupting the core of their “family friendly” mantra, it’s on. Here’s the thing, it took them a little bit, but we know they are closer today than they’ve ever been to figuring it out. Do you know how we know? Easy. Comic books. If Disney was not comfortable in their own skin with these franchises we still wouldn’t see them at all. We see them now, in comic books. The films are NOW not that far behind. Why do you think fans haven’t heard anything regarding Deadpool or Family Guy when it’s owned by Disney? The brass is still trying to figure out a way to work this in and capitalize more so. They have to because there is a lot of money being left on the table right now and Disney likes to print money. Good luck trying to make those franchises PG-rated and politically correct without losing your base fans (money). Deadpool needs to stay R-rated and Family Guy needs to continue to push the boundaries in order to stay relevant.
Now, back to Alien Annual #1. Marvel will present Gabriel Cruz’s first encounter with the Xenomorph. Again, will this be the route Disney takes with their Alien franchise?  A prequel? Who knows? To drive home the point one more time, these Marvel stories could be a foundation of a new Alien movie, same with anything pertaining to the Predator. Get these comics now before something is announced and then all of a sudden the “expert speculators” will dictate the market for you.
Miles Morales Spider-Man #40 and Avengers #58 – Here are two more Predator variant covers for your collection before the solo series begins soon.
A.X.E. Judgment Day #1 – It’s the X-Men vs. The Eternals vs. The Avengers. We think. Right? The start of Marvel’s big summer event.

Spider-Gwen Gwenverse #4 – The first appearance of Iron-Gwen and Night-Gwen? We’ve informed collectors upon each issue here. There will probably be a new character in every single issue, so stay on top of this title. Who would have thought Spider-Gwen herself would ever be a thing, so don’t knock any of these new characters.
Star Wars #25 – Marvel is celebrating the 25th issue as an anniversary issue. It’s quite the achievement considering how many relaunches there are all of the time.
Dark Spaces Wildfire #1 – A new story from superstar writer Scott Snyder and artist Hayden Sherman. The solicit reads like this will definitely become a Netflix movie sooner rather than later.
Iron Man #21 – The first appearance of a new villain named Switchback.
Rogues Gallery #1 – Writer Hannah Rose makes her comic book debut right here. The story is described as The Purge meets Scream. Artist Justin Mason will deliver all of the scary pictures.

DC Vs. Vampires All-Out War #1 – A new DC vampire comic. DC Characters fighting vampires? What’s not to love?
New Fantastic Four #2 – The new Fantastic Four doesn’t include anyone from Marvel’s first family, but one will make a guest appearance, Human Torch. It’s said that there will be several guest appearances here.
Shang-Chi And The Ten Rings #1 – And here we have a relaunch of a title that came out a few months ago. Do we dare say it? Why not just continue with the numbering with a new creative team? Nope, money to be made, let’s start at a number one issue instead. This series debut will begin to weave the tale of the true origin of the Ten Rings.
Defenders Beyond #1 – A new Defenders lineup here, including Blue Marvel. In 2008, InvestComics said this about the new Blue Marvel comic; Adam: Legend of the Blue Marvel #1  Now here’s an interesting character that will fly right under the radar on Wednesday. While fans flock to get the Ultimatum, the INTRODUCTION of a new Marvel character is coming out, in a number one issue no less. Tony Stark finds the only man to ever defeat Anti-Man, Going back in time he gets Blue Marvel! This character not only looks badass but is going to kick some ass in New York City and in sales. Get this quickly or buy the second print in a few weeks! A $3.99 comic at the time of new comic book release day. Recently sold for $1900.
She-Hulk #5 – The regulars around here know about the love we have for the Jack Of Hearts character. But he’s been a basic regular in the new She-Hulk series and we love it. There he is once again on the cover. Here is what we said when he first showed up on the She-Hulk #3 cover; She-Hulk #3 – The Jack of Hearts is back. See him? Right there on the lovely Jen Bartel cover. We here at InvestComics have a certain unexplained affinity towards the colorful JOH character. Reasons truly unexplained. So much love for the character, we’ve been speaking of him for over 15 years. Here are a few things we’ve said over the years, “Jack of Hearts #1 (1984). One of the best D level Marvel characters ever. Back in 1984, this limited series hit with little fanfare but was still a great read. Writer Bill Mantlo brought Jack of Hearts to a new level here. So much so (insert sarcasm here) that Jack of Hearts went on to appear about 10 more times in various comics in the next 7 years. Jack first appeared in The Deadly Hands of Kung Fu #22 (Cameo). His first full appearance is in the next issue; The Deadly Hands of Kung Fu #23. Here’s a cool thing here. The creator of Jack of Hearts (Bill Mantlo) teamed with the great Keith Giffen on the cameo issue, then teamed with Legend Gil Kane for the first full appearance. That’s an impressive cameo and first right? Oh, Jack of Hearts where art thou?” ~ “Jack of Hearts. Here is a long-forgotten Marvel character that literally shines with expectation. The costume alone could get eyes glancing over to see what is going on. An interesting player in the Marvel universe that would make for some fun screen time. A cartoon would be as colorful as live-action would. Make this happen, Marvel. *First appearance; The Deadly Hands of Kung Fu #22 (1976). This was a Marvel magazine. Jack of Hearts’ first comic book appearance was in The Incredible Hulk #213 (1977). Jack of Hearts four-issue limited series from 1984 is an easy get.
So, you see the love we’ve given? Again, why? Who knows? The first comic appearance is still a mega-cheap pickup. If you have a few bucks laying around, buy it. Maybe it needs to marinate for another 40+ years before it finally takes off, but there has to be a reason Marvel (Disney) refuses to lose the licensing on him, right?