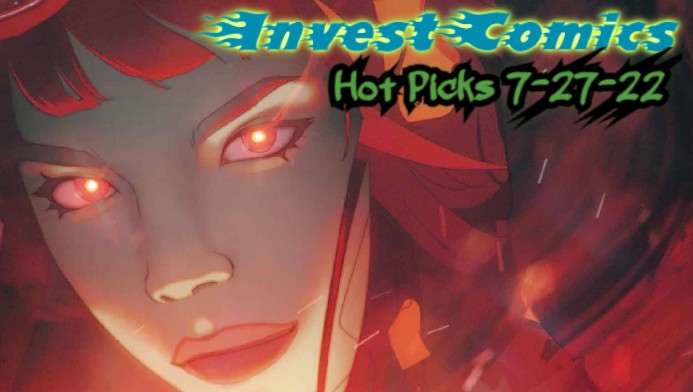 Here are this week’s top Trending/Speculative Comics out this Wednesday 7-27-22.
Please note: All new comic releases can and will change release dates from time to time. Check with your local comic shop on the guarantee of arrival time. If ordering from eBay, check with the seller or post details.
Like something we’re talking about? Like a cover? Like the debut of a new series? A first appearance?
Click on ALL Red-Highlighted LINKS/Comic Covers to BUY/BID from ALL available eBay sellers now (always buy from high-rated eBay sellers).

Iron Cat #2 – The early days of the Iron Cat character continue with new stories and new characters on a regular basis. Probably want to get in on this before Disney decides to insert her somewhere in a toon or a movie.
Something Is Killing The Children #25 – An amazing run comes arrives to its conclusion.
The Amazing Spider-Man #6 (#900) – Marvel reaches a milestone for its flagship character. With Spidey’s “overall” 900th issue (why not just stay with original numbering??), comic readers/collectors will get their first look at Sinister Adaptoid. This villain is all of the Sinister Six as ONE villain. Sounds like fun! Not for Spidey, but for us! Marvel promises an ending we won’t believe. A must-get this week for readers and speculators.
Ant-Man #1 – A new Ant-Man series. We’ve been down this road before. While the Ant-Man is an extremely fun and somewhat interesting character, it’s hard to see a sustainable run within the confines of today’s market. First off, they’ll be about eight more number one issues before the new film comes along, watering down any “premiere issue number one collector’s issue” lure, so there goes the semi-speculator side. And second, more importantly, the interest in a solo series isn’t going to hold readers’ interest long enough to give a hoot. However, there are always ace cards. This ace is writer Al Ewing. He can make not-so-interesting characters, interesting. Expect an interest right out of the gate here because fans will want to see what vibe the first issue will deliver. Mr. Ewing has a knack for bringing it with his craft. We’ll all anxiously await the arrival this Wednesday.
And a side note. We pointed out the more “expensive” high-grade first appearance of Ant-Man (Tales to Astonish #27) back in 2010 for around 8k. A recently signed Lee signed 7.0 sold for 24.5K. Just saying. You’re very welcome.
Strange #4 – The reintroduction of Shadow Knight (Dark Moon Knight).

Gambit #1 – A once crazy hyped/loved character almost fell into obscurity. So well loved within the underground, almost like Deadpool, Channing Tatum, like Ryan Reynolds, essentially willed himself into the Gambit role. The role and movie were a basic wrap, a gambit script is supposedly done, but it was all scraped. If we recall, Tatum went on social media someplace and expressed his disappointment with the entire collapse. Maybe someday it will get done, maybe it won’t, but until then, that Uncanny X-Men #266 (first full appearance) seems to have come down some with little to no interest. A recent 9.8 sale at $800 brought only 2 bids. Probably a good time to buy those raw X-Men #266 right now. There are a crazy amount of these copies available out there, so this too will hold down pricing a bit (i.e. New Mutants #98). But for now, this Wednesday we get a new series from the original legendary creator of Gambit, Chris Claremont. Will the fire begin once again for Gambit? Maybe. This series will entail the early origin of Gambit and introduce new characters along the way.
Genis-Vell Captain Marvel #1 – It’s very hard to believe in today’s ridiculously overpriced market that a Silver Surfer Annual #6 from 1993 has sold for $15 and less. This issue is the first appearance of “Legacy”, which is Genis-Vell, who later goes on to become Captain Marvel. Anyway, Writer extraordinaire Peter David and artist Juanan Ramirez start us off with a new series this week.
Deathstroke #11 – Deathstroke’s early origin story continues. Deathstroke: Year One.
DC Mech #1 – The brand new DC Mech world is introduced. How long before we see a whole DC Mech cartoon come to life? These mechs look bad-ass too.
Detective Comics #1062 – A new creative team; writer Ram V and artist Raphel Albuquerque. Look for a possible first appearance of a villain (a cameo, or lurking).