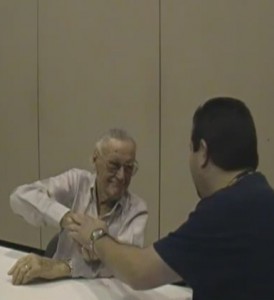 Welcome to the InvestComics Hot Picks for June 20, 2012

Happy Father’s Day to all.

As promised for months now, the InvestComics Stan “The Man” Lee Interview will be hitting you guys/gals very soon. As explained within the text that will accompany the video on InvestComics, the audio is a nightmare, but it is what it is. Some parts you will be able to hear Stan loud and clear, while in other parts you’ll be saying “wha..?” Well, the end result will never change for me personally though. I got to meet a Legend and that was enough in of itself. So I get to share some of my experience in meeting the Icon with the InvestComics fans. I hope you enjoy it.

Coming to a local comic shelf near you this week is Nightwing #10. This comic has an introduction of a new team called the Republic of Tomorrow with their leader named Paragon. Have to love the new 52 for all of the new introductions and new characters, simply awesome.

Watchmen #1 feature’s the first appearance of this week’s Before Watchmen Comedian #1.

Warning: There is controversial material covered ahead. In no way is this meant to change or skew your views or single anyone out. It’s simply an awareness opinion. If you do not feel you can be a mature adult and feel complied in getting upset, angry or malicious then please move along. The topic below discusses the release of Astonishing X-Men #51 coming out this week. Yes a gay couple gets married (no big deal). If you are not open minded, you need to stop reading now, although it would be a tremendous step forward if you did read ahead to offer up your mature opinions in this subject matter.

Some may view this article as a soapbox rant, it is quite the opposite. Awareness is what I call it. Will this article state anything that hasn’t been said before? No. Will this article state anything that will be so profound? No. Will there be anything in this article that you are not already aware of? No. Are you aware of the new issue of Astonishing X-Men #51 coming out this Wednesday? Yes. Does it bother some of you? Probably yes, but that’s unfortunate for reasons that some of you are completely narrow sighted of which the world we live in today. And then you have fans that are actually bothering for the same reason that this writer is regarding the latest Astonishing X-Men issue…..

Here’s the things folks, Gays exist, so do African Americans, so do Asians, Hispanics, Middle Eastern, Catholics, Judaism, Muslim, Churches, Temple, etc…. Some people must get past their own horse blinder beliefs in order for this to become a better society. People are what they are. It’s reprehensible that in 2012 that we still have racism within our world against all forms of life and lifestyles. Having strong convictions for something that you believe is a right that you hold as a human being, but not at the expense of hurting or degrading others. The gay communities have their convictions too. Equal rights. How does this affect YOUR daily life exactly? The African American community fought for their rights and now America stands with the first Black President in our history. This is what America is about folks. Opportunity, Freedom and Equality. Most of society has awoken with the realization that the color of one’s skin does not mean they are less of a person or qualified for a job; it simply means we’re growing up. Awareness. So what is the difference here with what a person’s sexual orientation is?? Why is that or why would this be such a burden on YOUR life? Gay people are human being’s just like everyone else, get past it will you?!

There is one thing that is extremely bothersome about Astonishing X-Men #51. Cut right to the chase here, Marvel and DC are going for a money grab. The President announced recently that he supports gay marriage. Soon after we get Marvel’s gay wedding, DC’s Alan Scott and this is essentially called money grab folks. No matter how you slice it, dice it or may look at it, there is no coincidence that this occurred within the comic book community so soon after the first President in United States history announces that he is a supporter of gay marriage. No matter what party you stand for, putting politics aside, he said it.

What about bullying? Do you oppose this? Sure you do. 99% of people do not want a child or anyone for that matter to be bullied into inflicting pain onto themselves or sometimes even more drastic measures are taken. What if your kid was bullied? Not okay right? What if your kid bullied someone else? Not okay right? Now what if that kid getting bullied by YOUR kid was because he’s gay? You don’t have to think about this do you? No reason to think here, it’s wrong. If you do not believe in equal rights, your beliefs equate to this scenario and you think its okay to completely destroy a kid’s life simply because of their sexual orientation? Sounds crazy right? Big waste of time.

Recently when the “big announcement” came out from DC that Alan Scott will be a homosexual character I immediately sent over the news to a friend of mine that is within the comic book Industry that is gay. I soon realized to myself, why did I do that? I felt a complete lack of respect toward my friend. This isn’t news, this DC exploiting the gay community to make money. Just like so many other money grabs took place in the comic book Industry with 9/11, the Afghanistan wars, war on terror, the first Black President and on and on we go. Way back in the day, war was featured in comics as a propaganda tactic as well as a tool to make fun of a madman like Hitler. In today’s comics, it’s very dark, very drama like, so very well written to the point that it leaves one wondering if one wanted to escape to read a comic book or just read the front page news. It’s done not so much for a good read these days, but more so for the “shocking content “ and trying to cash in on a lot of the hype that brings interest from the media big wigs; CNN, FOX, CNBC, CSPAN and so forth. It’s all about trying to grab the headlines these days. Who will sell more comics at the expense of a quadriplegic war veteran, a gay man or woman, the color of someone’s skin as in Spider-Man is Hispanic now! Invisible is Black! The absurdity of it all is mind boggling if you take a step back and look at the landscape of the entire industry trying to cash in. What happened to good old fashion comic books that simply did not have an agenda? Yes of course the hero vs. villain comics exist today, but the money grab is so prevalent that it’s become a sad state of exploitation.

Do we remember Marvel’s Amazing Spider-Man #96 (1971)? How about Green Lantern/Green Arrow #85 (1971). Yes we all know about the race to see who would get the first drug story comic out. Marvel won that race. But the main story here is that both companies wanted to race for the same cause…..to get a message out. Years and years later in 1992 we all witnessed the coming out of the first openly gay character in Alpha Flight #106. Again, a message was being sent here. Was there some idea that Marvel wanted to cash in on this? Probably, maybe, but on the flip side, it could have hurt them too. DC got in on the awareness program in 2001 with Judd Winick’s 2 part storyline “Hate Crime” in Green Lantern #154. This 2 part story dealt with a hate crime involving

a homophobic attack. 52 #7 with the gay Batwoman Kate Kane. Then recently Archie Comics jumped into the fray with Veronica #202, which introduced the first gay character into Riverdale. The modern day also brought us to Earth 2 #2 and then to….Astonishing X-Men #51. Yes there were comics in between that “delivered a message”, but these were just to name a few and make a point. You see, it wasn’t always about a money grab, well not including the last 4 comics, but we all did get the “message” when they delivered it. Or at least this person hopes so. Bottom line

here… stop being afraid your whole life of things that are “not the same” to YOU. Things YOU cannot control. Accept things for what they are. Expended energy on things that simply do not warrant such hatred and time are just a waste of time spent on this short time we all have on this planet. Put that energy towards something else. If you need to tell a story about “really life”, make it so that it doesn’t look so oblivious that all you want to do is make money on it. Make a story because you feel it needs to be told, not because you need to bring “shock value” or exploit people.  Expend your energies into accepting that YOU cannot and will never change who people are. Expend that energy into making a good comic book!

Scroll through 3 nice covers that made the cut for Covers of the Week below.

Until next week, Invest wisely.