This weekend, Friday March 15th through Sunday March 17th, Orlando welcomes it’s biggest Comic Con, MEGACON to the Orlando Convention Center. Sure, you’re going to meet Jimmy Palmiotti, Gail Simone, or Neal Adams. Yes, you’re dying to get autographed pictures with 99% of the STAR TREK: THE NEXT GENERATION cast ( I think Colm Meany is the only one not attending). You may even be arriving in your latest cosplay…

,,,but while you’re there, why not swing by ARTIST ALLEY table Burgundy 5A and meet investComics writer, and co-host of FFFIC (our weekly comic review show) Sebastian Piccione.

Sebastian will be debuting his latest self-published comic, HEROIC TALES #2. Heroic Tales is a 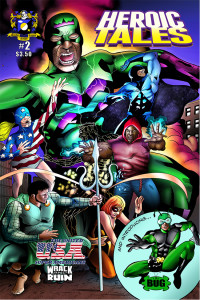 super-hero anthology that allows Seb to let out some of the characters that have been living in his head for years. Issue #2 features the latest chapter of THE UNITES SUPER AMERICANs (continued from issue #1) and in the second feature, introduces THE BUG. The Bug is based on a character Sebastian created back in High School (all the way back in 1988 when he was in 10th grade) but is only now making his first appearance in one Seb’s self-publishing company, SUNDAY KNIGHT COMICS’ titles.

At  Table 6A (still in Artist Alley row Burgundy) will be Dirk Grobb, whose making his comic debut as the artist on THE BUG story. The UNITED SUPER AMEICANS story features art by Martinho Duarte Abreu, who won’t be attending because…well, Orlando is quite a drive from Portugal.

Stop by, say “hi!” Tell them, InvestComics sent ya! Oh, and make Sebastian draw you something. he’ll whine that he’s a “writer, not an artist,” but you can tell him that we told you he holds a degree in Fine Arts, and he should put on his big boy pants and draw you a sketch! He only charges $5. Make him earn it!

Dirk will have prints and be doing be sketches. Sebastian will have some of his other works, including CAT. 5 #0, ALLIED FORCES #1, and HEROIC TALES #1. We don’t know if they’re what our founder, Jay Katz, would call a “Hot Pick,” but they’re pretty cool.

So, if you’re hitting MEGACON this weekend, look up Seb and Dirk!

2 thoughts on “InvestComics’ own Sebastian Piccione debuts comics at MEGACON”