Fan favorite writer, and Toronto Native, Jeff Lemire will be taking over the full writing reigns (he’s been co-writing with Geoff Johns) on JUSTICE LEAGUE OF AMERICA in spring of 2014, but with one significant change. The JLA becomes the JLC as the team 9and title) moves to Canada. 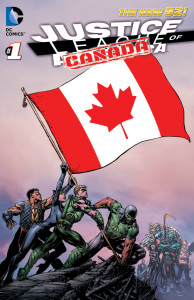 After the dust settles from the JL vs JLA vs JLD in TRINITY WAR, and the heroes return from the events in FOREVER EVIL, some of the current memebers of the various Justice Leagues, along with some new faces, will head to Canada, fed-up with the U.S. Government, particularly Amanda Waller and A.R.G.U.S. and their less than above-board treatment of the heroes.

The team will be based out of the James Bay and Moosonee are, though much of the action happens nearer to Toronto.

“This is like my ultimate dream job,” Lemire says. “It sounds like a joke and something like this would never happen, but it is actually happening, and I couldn’t be happier.”

Lemire goes on to tell THE TORONTO STAR,

“I do want to create a cool, rural Northern Ontario headquarters for Justice League Canada, and I don’t want to spoil it yet. And it’s not a hockey rink, I promise. Although, of course, it did cross my mind,” he says with a laugh.

Lemire proceeds to discuss the nature of the book, and how strongly he feels about doing Canada proud.

“It’s not really like Alpha Flight, as we’re not creating a bunch of very Canadian characters,” Lemire says. “Like those characters are all almost clichéd Canadian archetypes. This is still very much set in the regular Justice League universe and the team will still have some of the bigger named superheroes, but they will actually be located in Canada now, and there will be a couple of new members who are Canadian. So obviously as a Canadian, and as a Canadian storyteller, it’s something I’m very proud of.”

As for the line-up, Lemire teases that after the current storylines wind-up, the various Justice League teams (League, America, and Dark) will have a shake-up to their rosters, and those that join upwith the JLA will opt to make the move north and become JLC. He says the line-up will consist of a mix of A-listers and some of his favorite odd-balls.

There will even be two “new” Canadian characters joing the team. One, the worl spanning, zeta-beam traveling,  ADAM STRANGE is a fairly major DC character, making his NEW 52 debut, with the slight origin tweak that he is now Canadian. The other will be a totally new character, a teenager who Lemire hopes will  “reflect a real part of [Canadian] cultural identity.”