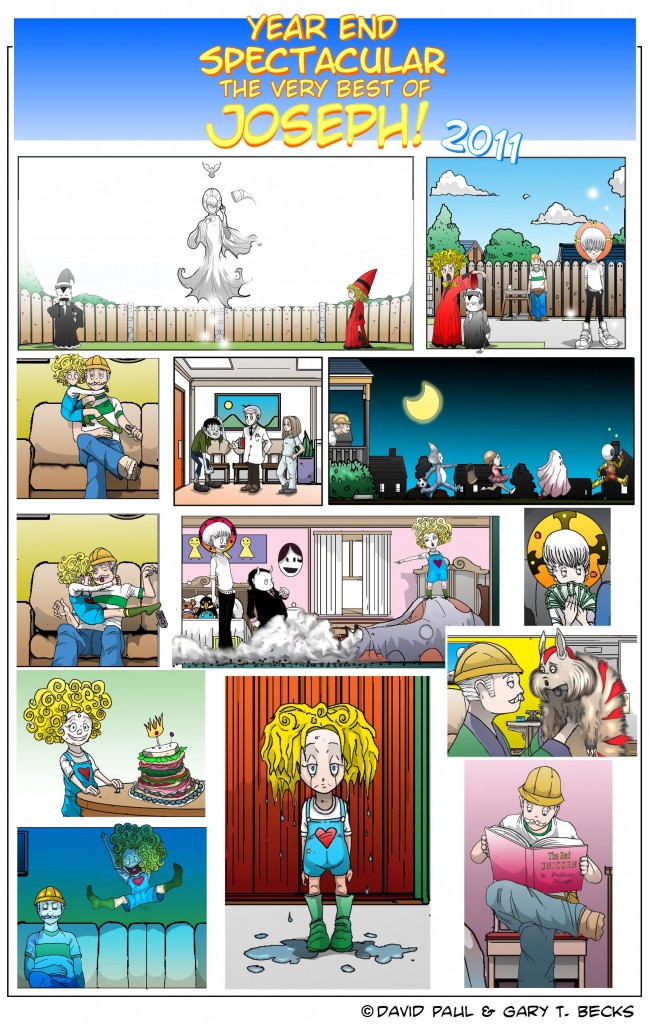 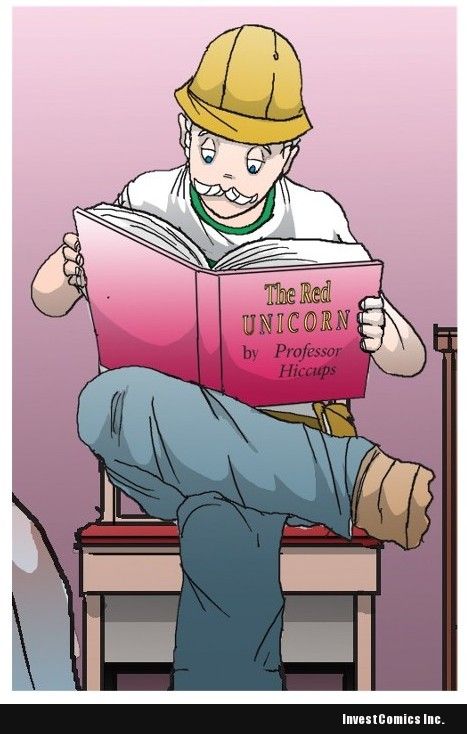 While this is from a strip readers have not seen yet it’s a great example of why I as the writer love Joseph himself. Here we see an every-day father trying his best not to lose his little girl to a modern society obsessed with entertainment and the distractions of video games, etc. 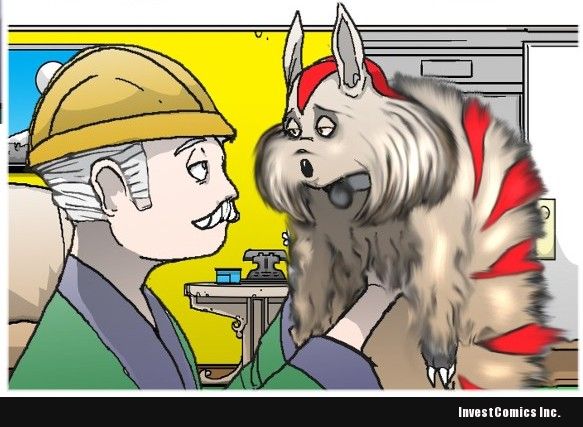 This past year has been about JOSEPH! as a series finding its footing. When Joseph is sick one day and needs to stay home Jesus and his best friend Lil’ D. force him to pet-sit Lil’ D.’s cat Lucius, who happens to also be sick. This particular strip is showing us what kind of world JOSEPH! is set in. For one, it’s a world in which animals can talk. This is just the start of the series establishing itself, much like a television series must do in its first season. There’s much more ahead in 2012 and we will see this is a world in which anything can happen. Yes. “anything”. 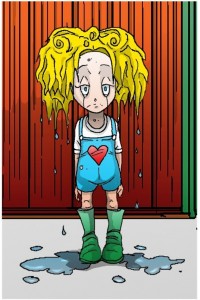 How can you see the face of this sad little girl and not want to punish her older brother? Ruthie is not just any little girl. She’s the little sister of the future savior of all humanity. But at this point in time Jesus is a 14 year old boy who wants to hang with his best friend and not be pestered by his 10 year old sister. But when Jesus and Lil’ D. played a prank on Ruthie it backfired. She got him back when she sewed all the openings in his pants closed. 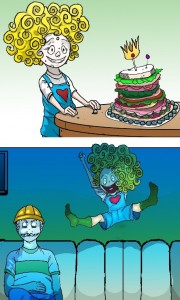 Okay. I’m about to give something away here. This strip is based on a true story. When I was 14 we had some neighbors with a little girl of about 10 years. She was adorable and used to love when I came over and entertained her in the playroom of their basement. I was 14 so it was way not cool to tell my friends about this little embarrassing fact so there are only a handful of people who previously knew this story. One day her parents asked me to baby sit and even offered to pay me. Cool. I could buy that Prince tape I was wanting. Totally rad. After a few hours the little tyke grew hungry and led me to the kitchen where she began to order what she wanted. Not wanting to disappoint my young fan I quickly unloaded the fridge and cabinets of everything she said she wanted. The specifics can be imagined. Let’s just say I was never asked back to baby sit again. But hey. At least my fan was happy. Sometimes I wonder what happened to her. Hope she grew up healthy.

Like many dad’s all across America Joseph is just a little proud of his driving skills. But when he doesn’t listen to his wife Mary to stop for gas his pride gets them stuck in the middle of nowhere with no gas. Normally Joseph is always telling Jesus to refrain from using miracles, but in this case he makes an exception. Jesus decides to exploit the situation. Of course. 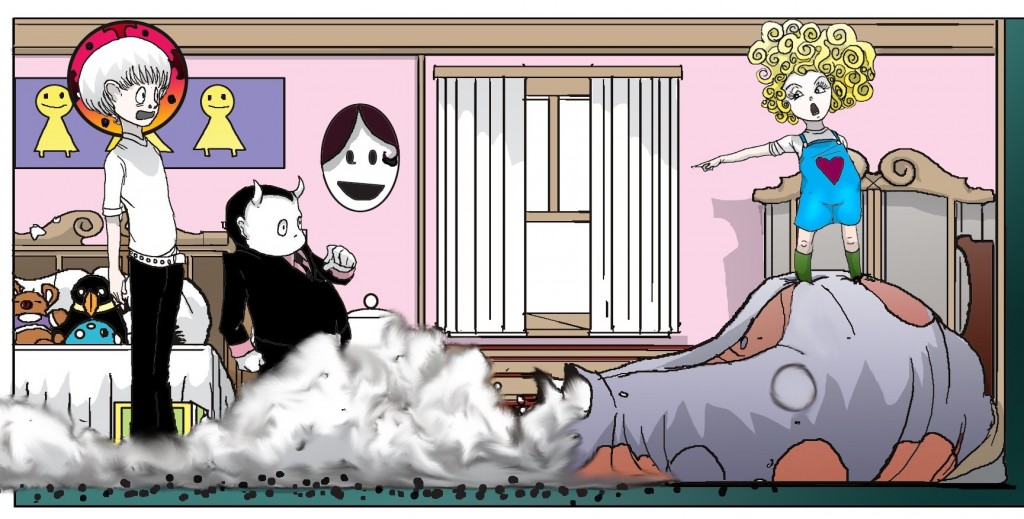 Here’s another good example of me pulling from real-life for source material. This is another true story, and this time given to me by my friend Ashley Auld from her own childhood. There’s so much for me to love in this panel alone. The looks of exasperation and surprise on the faces of Jesus and Lil’ D. are great, but the whole defiant stance of Ruthie is priceless. Love it!

For many people Halloween is the best time of year. If you’re a kid it’s essential for a healthy lifestyle. Only one thing can compete with Christmas and that’s Halloween. In the world of JOSEPH! there is no Christmas because Jesus hasn’t grown to fulfill his destiny yet. Only Hannukah and Saturnalia. As you’ve seen most recently we’re going to treat Christmas as Jesus’ birthday. And that makes sense. 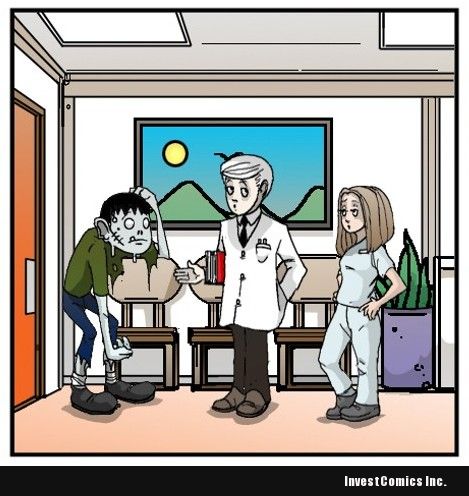 Zombies are huge! I never thought I would get caught up into the rage over the undead but AMC’s The Walking Dead has made me a convert. I purposely avoid the comics so I’m not spoiled to any potential plots. This strip came about when I was joking with friends about the acronym ADD. “After Death Disease”. We also joked about Skeletor visiting his doctor: “I’ve got no friggin’ lips, man!” But I’d rather avoid copyright infringement.

It amazes me that so many people can caught up into local weather reports during a POTENTIAL storm. It doesn’t even need to be raining for them to interrupt your favorite shows just to tell you, “Hey, it’s gonna rain!”

Local news stations are in competition with one another. As such, they sell fear to keep you glued to the TV for six hours, getting viewers in a panic that they and their loved ones are going to die when they slip on the dew outside their doors. But hey. Better safe than sorry.

The number one strip of 2011 is our big premier at InvestComics. It really set the tone for what readers were going to see and what they could expect. Ruthie wants to play Wizard Boy and Jesus and Lil’ D. are forced to play with her. After Ruthie annoys her brother to use his wand he decides he’s going to show off just a bit and shows us he doesn’t need a wand. Ruthie taddles on her brother of course, exclaiming, “Daddy! Jesus is using miracles again!”

2011 is just the start. At the end of 2012 (yes, we’ll still be here!) our readership will be larger and we’ll have fun letting others vote to choose the top 10. What can you expect in 2012? Robots, gay aliens, monsters, girl trouble. Ya know. Typical stuff any father of a 14 year old boy destined to be the savior must endure. Because when God tells you to raise his only begotten son you do whatever you have to.