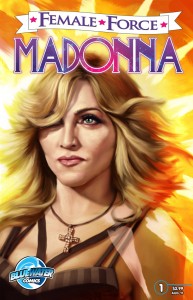 Bluewater is pleased to announce a special comic book project featuring one
of the most accomplished and well-known figures in the history of American
pop culture, Madonna.

“Female Force: Madonna” will be released in August 2011 and have a cover
price of $3.99. The bio on the pop icon’s life will be written by CW Cooke
and drawn by Michael Johnson.

Madonna is arguably the most influential figure in the history of American
music. This comic book will focus on her humble beginnings and the
incredible events that led to her eventually becoming one of the few people in the
world recognized by only their first name! Though she has paved the way for
many female pop stars that came after her, from Britney Spears to Lady Gaga to
Beyonce she is unique in that while many are compared to her, she is never
compared to anyone else. There is still only one Madonna and even today, in
her fifties, she remains culturally relevant. This comic book shows the
influences on her music and style that in turn have influenced every pop star
who aspires to not only make songs that people will always remember, but have
an impact on society.

The “Female Force” comic series offers a broad examination of strong and
influential women who are shaping modern history and culture. In past issues,
the monthly series has featured, Hillary Clinton, Oprah Winfrey, JK
Rowling, Ellen Degeneres, Sarah Palin and others.

Bluewater’s Vice President Jason Schultz said, “Our goal is to show the
little-known events and influences that resulted in Madonna becoming the
phenomenon she remains to this day, more than a quarter-century after she burst
upon the scene. A visual medium provides perspective that is not only
accessible but more relatable to the average person without losing any of the
information involved”.

This 32-page comic book will be chronicling this saga, “Female Force:
Madonna ” will explore all sides of this inimitable talent, from her live
performances, ever-changing musical tastes, to her being a leader in fashion and
her charity work, Madonna has made positive contributions to her fans’ lives
and society at large and how, despite numerous controversies she remains
beloved by more fans than ever. Through it all, she always remained true to
herself and appeared to be genuine. What you see is what you get with her. That
– and her remarkable talent is what has made her an enduring legend. Madonna
is quite simply one of the most powerful women in the history of
entertainment.

“Most pop stars owe everything to this woman. It’s amazing all of the
things that she’s done in her lifetime, and I have a feeling that this is still
only the beginning”, says Cooke, who said he had fun scripting the Material
Girl’s life story.

For more information on “Female Force: Madonna” and other comics from
Bluewater Productions, go to www.bluewaterprod.com or check them out in your
local comic book shop, Barnes & Noble and Amazon.com.   To Pre-order it on
Amazon click here: http://amzn.to/jJLF47