NEW YORK – On May 28, Marvel Comics will release the highly anticipated X-Men: Magneto Testament hard cover, a collection of the five-issue critically acclaimed limited series from the fan favorite team of New York Times Best-Selling Author Greg Pak (Incredible Hulk, Incredible Hercules) and Carmine Di Giandomenico. This collector’s edition hard cover will be jam-packed with amazingly powerful extras, including a story never before published, and arrives with a suggested retail price of $24.99.

Today, the whole world knows him as Magneto, the most radical champion of mutant rights that mankind has ever seen. But in 1935, he was just another schoolboy — who happened to be Jewish in Nazi Germany. The definitive origin story for one of Marvel’s greatest icons begins with a silver chain and a crush on a girl — then quickly turns into a harrowing struggle for survival against the inexorable machinery of Hitler’s Final Solution.

Additionally, X-Men: Magneto Testament collects the short story The Last Outrage, written by Dr. Rafael Medoff, director of the David S. Wyman Institute for Holocaust Studies, and illustrated by comic book luminaries Neal Adams & Joe Kubert.  Learn the true life story of Dina Babbit, a Holocaust survivor who was forced by Nazis to paint portraits during her captivity in Auschwitz , and her continuing struggle with a Polish museum to reclaim her works from their possession. 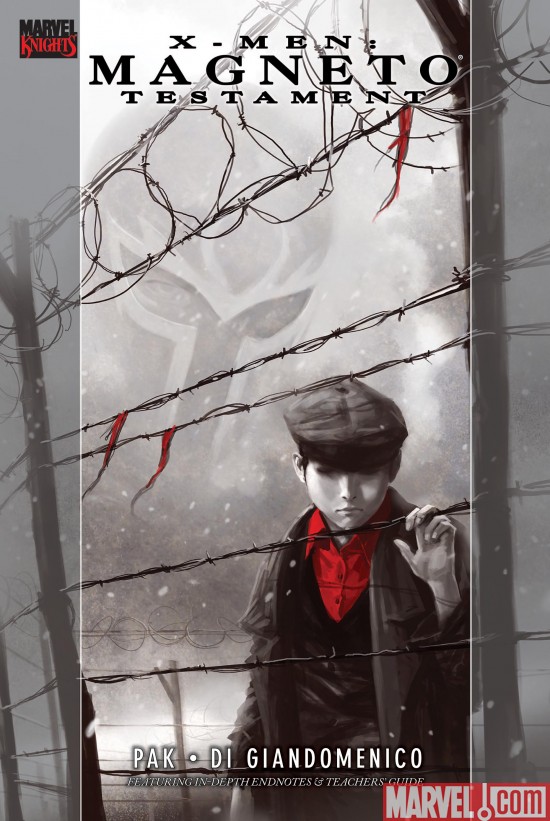