Marvel lets us all in on what panels you can attend at Comic-Con this year. 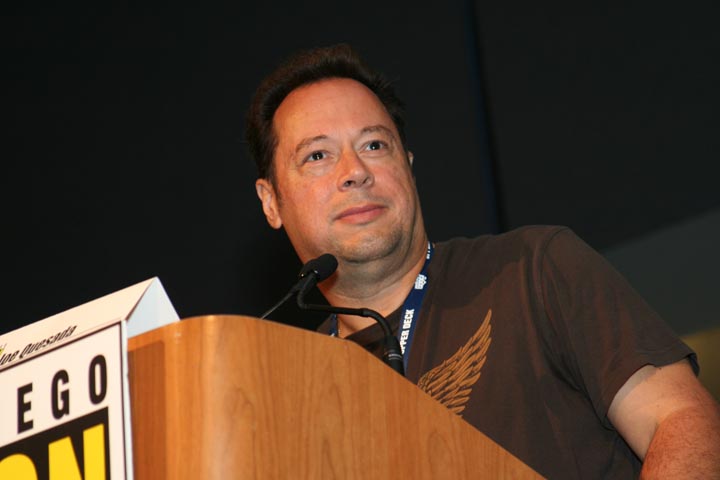 Marvel is proud to unveil our complete panel schedule for Comic Con International in San Diego . Sure, you’ll be visiting our booth on the convention floor (that’s booth #2429, True Believer!), but now you can enjoy the world-famous Marvel Panels! Swinging off the stands, flying onto the big screen, smashing through televisions, blasting into game consoles, and ruling the web, Marvel Entertainment is the one company where you can find the best in comics, films, animation, games and digital media. Now we’re bringing it all to San Diego for you, the fans!

“Marvel has the best fans in the world and we’re excited to provide them with the best panels in the world,” said Mike Pasciullo, Vice President of Merchandising and Communications, Marvel Entertainment Inc. “If you’ve never experienced a Marvel panel live, make sure to stop by for Q&A with your favorite creators, major announcements and, as always, big surprises!”

Please note, all guests, times and rooms are subject to change.

1:00 – 2:00 Marvel: Mondo Marvel – From the Marvel U to the Ultimate U and everything in between, we’ve got the top talent on hand to talk about all of your favorite heroes and villains as well as make a few surprise announcements!  Panelists include Jason Aaron (Wolverine: Weapon X),  Dennis Calero (X Men Noir), Matt Fraction (Invincible Iron Man), Paul Tobin (Models, INC), Frank Tieri (Dark Reign: Lethal Legion), Steve Wacker (Spider-Man Editor), Jim McCann (New Avengers: The Reunion), and more as they take on all questions!  Room 6DE

3:30 – 4:30 Marvel: Breaking Into the House of Ideas – Are you a writer or artist?  Ever dream of working for Marvel?  Do you find yourself thinking “I could do that…if I knew how!”  Well, here’s your chance!  Join C.B. Cebulski, Marvel’s Talent Liason, and special guests writer Jeph Loeb (Ultimatum), Marvel editor Charlie Beckerman, artist Mike Choi (X-Force), colorist Christina Strain (Runaways), and more to find out the answers on how to get your foot in the door at every level in the creative process and how to make your job MARVEL!  Room 6DE

11:00 – 12:00 Marvel: X-Men – The streets have erupted in violence and the safe haven mutants thought they’d found is in turmoil.  The Dark Avengers have put Daken in Wolverine’s place, and there’s an all-out war tearing through space and time with a certain red-haired green-eyed girl at the center of it.  You’ve got questions & these people have answers!  X-Men group Editor Axel Alonso is joined by a host of creators to lay out what’s going on and resurrect a beloved…—well, that would be telling!  You need to hear it for yourself!  Panelists include Matt Fraction (Dark Avengers/Uncanny X-Men: Utopia), Craig Kyle & Chris Yost (X-Force), Marjorie Liu (Dark Wolverine), Daniel Way (Deadpool), Jason Aaron (Wolverine: Weapon X), and more for this all-new, all-DEADLY panel! Room 6DE

2:00 – 3:00 Marvel: Cup O’ Joe – This is it, Mighty Marvel fans- the no-holds-barred, anything goes, full of surprises panel you wait all year for, and it’s here!  Marvel’s EEK (Editor-in-Chief) Joe Quesada takes on all questions, shocks the audience with jaw-dropping announcements, and keeps you guessing with surprise guests.  You never know who will show up, but you better be here, because this is the panel that everyone will be talking about! Room 6BCF

The Marvel Animation panel is linked to talent signing events at the Marvel Entertainment booth (#2429) on the convention floor. The talent behind Iron Man: Armored Adventures and Wolverine and the X-Men will be signing from 3-4pm. Masao Maruyama and Warren Ellis will be signing from 6-7pm.

5:30 – 6:30 Marvel Digital Comics…And Beyond!. Be there for the world premiere of Marvel Motion Comics! Join Joe Quesada, Dan Buckley, members of the Marvel Digital Media Group and SURPRISE GUESTS as they unveil the next phase in graphic storytelling. Also, catch the world premiere of the Marvel.com original video series, Marvel Super Heroes: What The–?! episode 4. Plus, get jacked into the rest of the digital dynamite—from Marvel Digital Comics Unlimited (the greatest collection of Marvel comics ever assembled online) to casual games, original streaming video and the future of Marvel’s ever-growing digital endeavors! Room 6DE

11:30 – 12:30 Marvel: Dark Reign – The Cabal has taken over the Marvel Universe and forever changed it.  Now, Norman Osborn has his LIST and is taking everyone down who stands in his way.  What lies on the horizon?  Find out here as the creators behind the madmen & women putting the Marvel Heroes through their paces answer your questions and let you in on what happens next! Join Joe Quesada, Rick Remender (Dark Reign: The List), Matt Fraction (Invincible Iron Man), Jason Aaron (Dark Reign: The List), Frank Tieri (Dark Reign: Made Men), Joe Casey (Dark Reign: Zodiac), Marvel editor Alejandro Arbona and more as they shed some light on DARK REIGN!  Room 6A

11:00 – 12:00 Marvel: The Women of Marvel – One of the most talked about panels from last year is back!  Forget Storm & She-Hulk, meet the real Ms. Marvels of the comic world!  Join women from every discipline in the creative process at Marvel to hear what it’s like working as a woman in comics today and how you can join them.  Say goodbye to the so-called “Boy’s Club,” these ladies are busting down the four-color ceiling!  Guests include New York Times Best Selling author Marjorie Liu (Dark Wolverine), Christina Strain (World War Hulk), Colleen Coover (Marvel Adventures), Sonia Oback (X-Force), Emily Warren (Secret Invasion) and more!  Room 7AB

12:45-1:45 Marvel:  The Next Generation of Marvel Video Games – Marvel: Ultimate Alliance 2, Super Hero Squad and Iron Man 2.  Join us for trailer previews, discussion and Q & A on the next wave of Marvel Games from publishers Activision, THQ, and SEGA.  Writers Matt Fraction , Mark Hoffmeier, and Evan Skolnick will be on hand along with the game developers Kyle Brink, Robert Blackadder, Dan Tanguay and TQ Jefferson to discuss views on how story and design can come together to make licensed games that don’t suck. Room 6A