Marvel Comics Every New Series Of 2013 Number Ones Sales Figures 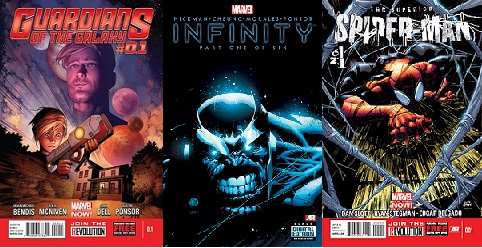 Marvel Comics had another year full of blockbuster hits during 2013.

In total they had 70 new #1 issues released including ongoing series, mini-series, one-shots and re-numberings.

They also featured 8 annuals and 16 entries from 2nd printings.

This chart only covers Jan-Nov as the Dec sales figures are not yet released until the new year.

Here we list and rank all of them and show the diverse and successful year that Image had.

This chart shows the sales figures for every issue released during 2013 of any new series started in 2013.

Superior Spider-man debuted in January with a bi-weekly schedule making it the most prolific new series with 22 issues released during the year.

13 different high profile new series debuted with sales over 100,000 copies each.  This is almost triple that of DC this year.

Guardians Of The Galaxy #1 was the best selling comic book of 2013 with print run over 200,000 due to interest in a new movie in the works.

“Infinity” was the big crossover storyline of  the year with hefty orders over 200,000.

This chart not only shows what sold well and what didn’t but it also is very useful to see which books have kept their sales figures up and are likely to be the books that in the next year stay hot and could potentially rise in value.  The main ingredient is constant and steady sales OR better yet increasing sales month to month. (The later is very rare in the comic business)

It is very common for #1 issues to be ordered higher than subsequent issues but after a few issues if the title is truly popular sales should level out.    Retailers usually get it right!  In most cases they order the right amount of product.   Once in a while they over order a product making the book virtually worthless in the secondary market.  The rare occasion retailers under order a title since they don’t know what to expect with a new series and these are the books that always have the secondary market price gains.

Marvel had no surprise hit titles during 2013 and therefore Marvel almost no impact in “hot title” back issue market during the year.  Only a few odd books here and there showed some later aftermarket attention.   Most of the market was driven by the pre-made variant covers that retailers had to order so many extra copies to get.

So what titles did show staying power and kept the numbers up issue to issue?

All retailers really seem to over-order on all major Marvel #1’s so its usually a better guide to compare issue to issue sales with that of #2 issues when retailers drop their orders to safe realistic numbers.

Age Of Ultron was mass produced mini-series for 10 issues but the series went out with a bang with orders upped for the last issue over 100,000 copies.

Deadpool Kills Deadpool 4 issue mini-series stayed strong and sales barely dropped from #1 to #4.  Superior Carnage #1-5 also did decently.   What If AVX #1-4 did the same thing!

Powers Bureau was one of the least ordered titles of the year and therefore quickly sold out and had a bit of aftermarket interest and sales stayed fairly consistent only dropping 5,000 by #8.

Alpha Big Time #0.1 was a pre-cursor to the #1 ongoing series.  This origin issue featured a Spider-man reprint causing low orders but also another sell out with only 8,500 copies.

Powers Bureau at 14,600 was the lowest ordered #1 of a new ongoing series and another sellout.

While its common for a new series to lose up to 30% of its initial order from #1 to #2 its more important to see if sales stabilize or continue to drop after issue #3.    Some big droppers in sales and not likely to show increases in the future include:

The best selling non-superhero Marvel #1 of the year was Morbius Living Vampire at 43,000.  The #2 ranking new series was the TV show mini-series Dexter with 20,000.   Emerald City of Oz based on the Wizard Of Oz mini-series debuted with 13,700.  Two different Dark Tower Gunslinger series both debuted at 12,000 each. 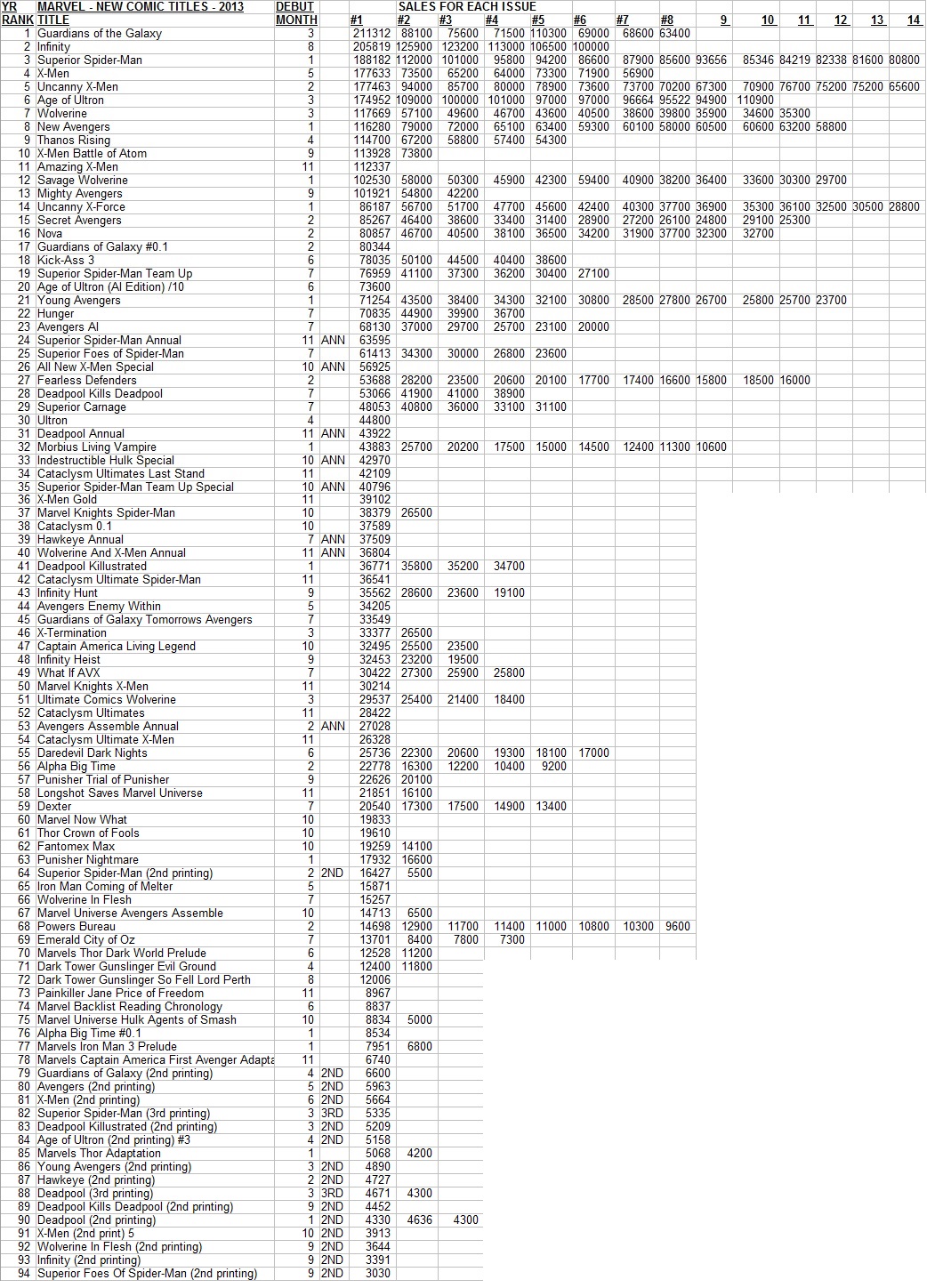 Thanks to John Jackson Miller at www.comichron.com  for the initial Diamond sales figures data

You can see complete monthly Diamond sales chart data and more stats at his site !

Terry Hoknes (author) of Hoknes Comics loves analyzing statistics and watching the growth and fall of comic titles over a period of time.  He sells all of the latest hot back issue secondary market new comics and all new Diamond products at www.HoknesComics.com and also self-publishes a series of books called “Investing In Comic Books” that focus on the Golden, Silver and Bronze ages of comics.   hoknes@hotmail.com    Read more about these hot sold out comics at www.comicsheatingup.net