Marvel Entertainment and ABC Studios are proud to announce Castle: Richard Castle’s Deadly Storm, an all-new hardcover graphic novel inspired by the popular “Castle” television series.  This 112 page hardcover hits comic shops and bookstores everywhere on September 28th, 2011.  Fans can get a first look at the upcoming graphic novel, when Richard Castle (Nathan Fillion) reveals the cover on “Knockout,” the Season Finale of “Castle,” MONDAY, MAY 16 (10:01-11:00 p.m., ET) on the ABC Television Network.

When viewers first met Richard Castle, he had reached celebrity author status with the success of his Derrick Storm mystery novels.  In an unprecedented collaborative effort between Marvel, ABC Studios and the producers of “Castle,” the adventures of Derrick Storm will be chronicled in an all new graphic novel from some of the most accomplished creators in the industry.  “I am honored and humbled to see Derrick Storm join the ranks of some of the greatest heroes of all-time,” said Richard Castle.  “Being a part of the Marvel family is a childhood fantasy come true for me.”

“We are incredibly excited to be partnering with marvel to bring Richard Castle’s early literary works to life,” said Andrew W. Marlowe, “Castle” creator/executive producer.  “It’s a great way to expand the Castle universe for all our fans.”

“It’s exciting to bring the Derrick Storm novels to life for the first time ever” said Axel Alonso, Marvel Entertainment Editor in Chief. “Whether you’re new to the world of ‘Castle’ or a long time fan, there’s something for everyone in Castle: Richard Castle’s Deadly Storm—and it’s the kind of book that reaffirms Marvel’s commitment to creating new fans of comic books.” 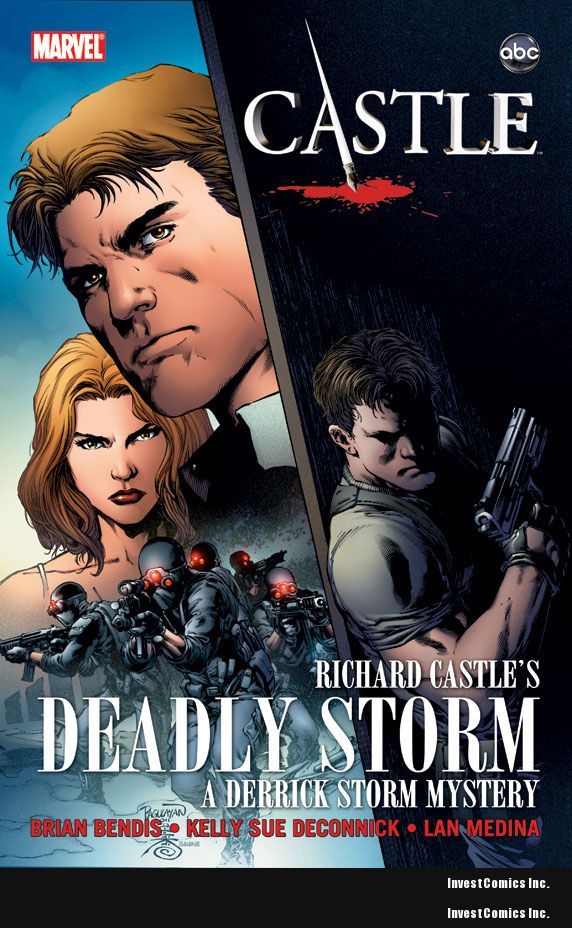 ABOUT MARVEL ENTERTAINMENT
Marvel Entertainment, LLC, a wholly-owned subsidiary of The Walt Disney Company, is one of the world’s most prominent character-based entertainment companies, built on a proven library of over 8,000 characters featured in a variety of media over seventy years. Marvel utilizes its character franchises in entertainment, licensing and publishing. For more information visit www.marvel.com

ABOUT ABC STUDIOS
ABC Studios, part of ABC Entertainment Group develops and produces compelling programming for both broadcast network and cable television as well as digital platforms.  ABC Studios has delivered some of the most successful, talked-about and evolutionary series on television such as Desperate Housewives, Grey’s Anatomy, Lost, Criminal Minds, Army Wives and Brothers & Sisters.

For more information on “Castle,” visit www.ABC.com and www.RichardCastle.net.  Viewers can also follow the show via http://facebook.com/Castle and Twitter: Castle_ABC