Marvel held some big parties for their 70 year anniversary and they were pretty successful.

Here’s Marvel thanking all you made those parties a hit.

Marvel Thanks Retailers And Fans For An Unforgettable 70th Anniversary! 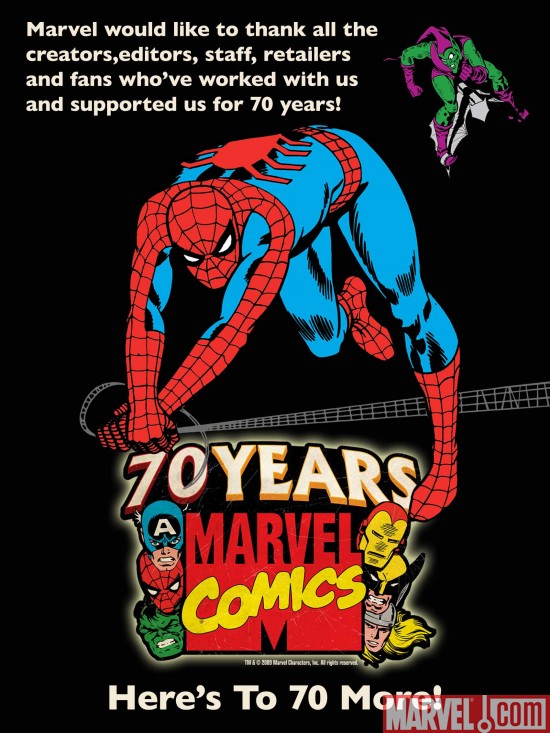 On August 11th, 2009, True Believers all around the world celebrated the 70th Anniversary of Marvel Comics and fun was had by all! Marvel would like to thank all fans and retailers who participated in this unprecedented worldwide celebration at over 500 comic stores!

“Our Marvel party was a smashing success!  Take a look at two short videos that we shot at the party, both available on the video page of our website: http://www.midtowncomics.com/custompages/videos.asp. The party was a smash, and the crowd absolutely loved seeing Spider-Man and Iron Man.   The actors in the costumes answered questions for the press and customers, and stayed hilariously in character throughout. Thanks to David Gabriel who helped set things up and made sure we got Spidey and Shellhead.  Make mine Marvel!”—Gerry Gladston, Midtown Comics (www.midtowncomics.com)

“Marvel Comics 70th Anniversary party was a blast! We celebrated with cake, comics, and fans at our store. Customers old and new all coming together to share their love and enthusiasm for Marvel Comics. Comic books are still around after all these years, a truly original american art form that has stood the test of time with Marvel comics leading the way.”—Randy Myers, Collectors Corner Inc (www.collectorscornermd.com)

“Fans Young and Old gathered in the dark of the night to meet America ‘s First Hero, Captain America at Comic Book Ink in Tacoma , Washington as part of Marvel Comics 70th Anniversary Birthday Celebration! The event, hosted by Marvel Comics and Comic Book Ink, was a huge hit…with a love for comic books and cake that were shared by all! Thanks for the opportunity Marvel..and we look forward to the next chance!”—John Munn, Comic Book Ink (www.comicbookink.com)

“Out 70th Party last night was quite a success.  We had a nice turnout, made some good sales, and got some good newspaper coverage in both our major local newspapers.  Plus, it was just plain fun. Many thanks for putting together such a nifty idea.  And thanks for all the great 70th Anniversary one shots.  They’ve been solidly enjoyable.”– Nicholas Yutko, Dreamscape Comics (http://www.dreamscapecomics.com)

Marvel’s 70th Anniversary celebration continues all year long and you can get up to the minute news at www.marvel.com/70. Here’s to another 70 years with the greatest creators, retailers and fans in the world!