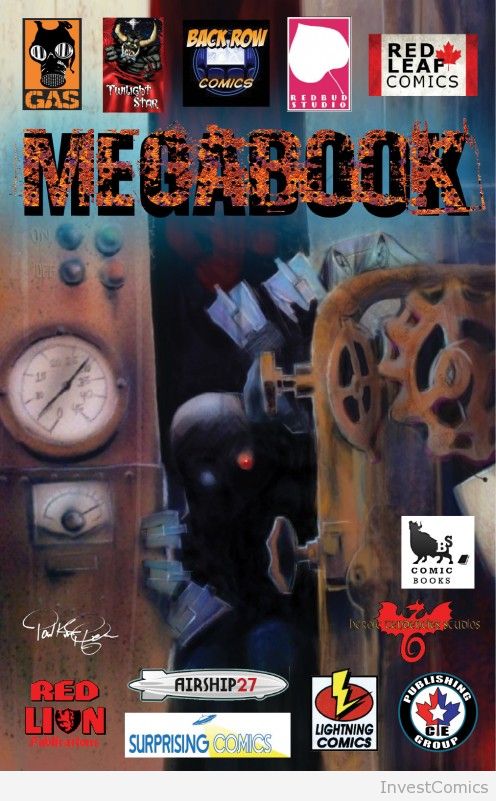 So what may you ask is MEGABOOK?!?

It’s quite simply the Largest, most Massive, Humungous,Gargantuan, Enormous (FREE) Comic book anthology in the UNIVERSE! It weighs in at 212 pages, 34 stories, 62 creators and is soo stinking heavy that when you download it to your Ipod you’ll need chain suspenders to hold your pants up.

MEGABOOK is sooo Massive that when you download it to your laptop you may very well break both of your legs while lounging on the couch, and firefighters will have to use the jaws of life and a crane to remove the laptop from your battered lower extremities. And did I mention that it’s totally FREE?!??

But seriously, this is an anthology book that I put together with tons of friends that showcase any comic creator who wishes to participate. We wanted to make the biggest totally FREE comic book anthology on the internet! So I called a bunch of my publishing friends and they all pitched in their creations and posted an ad on Digital Webbing asking for submissions around last November. It hit the Graphicly stands mid February and is taking the planet by storm.

I came up with this idea because I remember just how much it totally stinks to try and get your hard work published with anyone. I remember the waiting and wondering for months and years to see if anyone at all would ever publish any of the projects I had worked countless hours on. Or being told that your work is awesome and was going to be in some book and then never hearing from the publisher ever again. It’s a familiar tune that everyone who has drawn a line or scripted a word has experienced at some time or another.

So when CE Publishing was so graciously accepted into the Graphicly fold, I wanted to give every opportunity to comic creators where not much exist. And also repay the amazing publishers I had worked with along the way who were willing to take a chance and publish my work, and make tons of new friends as well. MEGABOOK is basically a Limelight book to give creators and small indie publishers the press time they deserve on a an amazing digital distributor.

Each creator or publisher has their story published along with an ad page to use as they please. There are a few editorial rules though since we want to market MEGABOOK to the widest audience possible. But they are very accommodating. The basic format of the book is action and adventure though. Blood, guts, gore, humor, heroes and anti-heroes, and all out action and adventure.

We all hope you enjoy it! Click on any of the links below each MEGABOOK image to the right which will send you to our comic book stand at Graphicly.

The best part of this is that there are even MORE FREE comic books on our comic stand to download and enjoy!  These are NOT the crappy 10 page teasers that the stingy big publishers give you.  These books are the WHOLE Enchilada!  Just like MEGABOOK!

And better yet, by reading MEGABOOK you’ll get a taste of 11 other fabulous publishers that you really REALLY should check out and start reading. Each one of them has my A1 “CE Publishing stamp of approval”, so go out and support your local INDIE!

SCROLL THROUGH 17 PAGES OF GOODNESS RIGHT BELOW!