Berkeley, CA – 26 October 2011 — The world of MORIARTY just got a little bigger with the announcement that Mike Vosburg will serve as guest artist for MORIARTY #7. Famed for his work in Marvel, DC and HBO’s Tales from the Crypt TV series, Vosburg joins writer Daniel Corey and artist Anthony Diecidue in creating a special flashback sequence for the 3rd chapter in The Lazarus Tree storyline.
When asked about his guest artist duties on MORIARTY, Vosburg stated, “Working on the Moriarty book was a real treat. Not only is the time period one that I’m very fond of, but Dan’s stories have an emotional impact and visual sensibility that made my job as an artist an exciting and rewarding experience.”
Diecidue adds, “Voz has been like a mentor to me for years now. Coloring his pages is like getting a lesson in storytelling. They’re awesome. I just hope I don’t screw them up.” 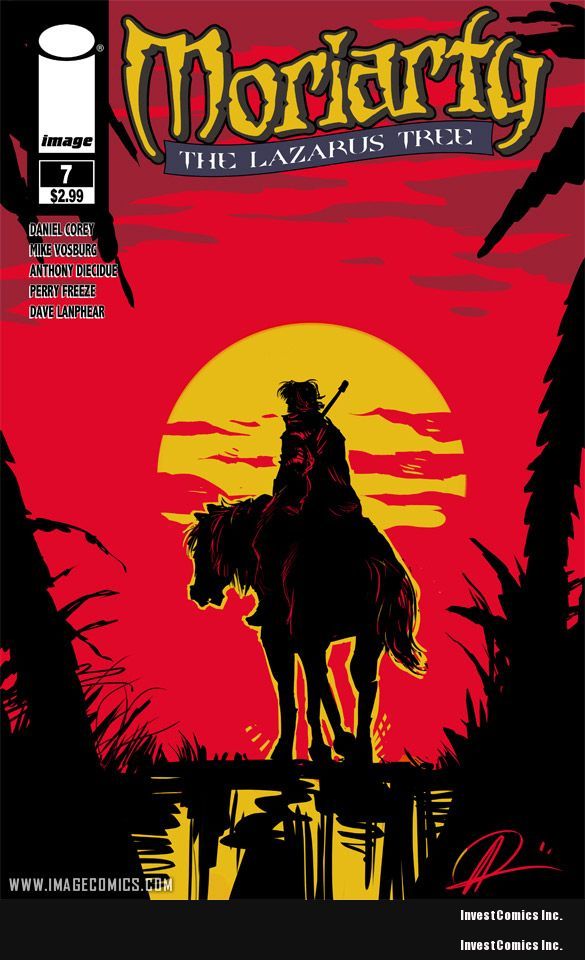 ABOUT MIKE VOSBURG
As a teenage Mike edited and produced the fanzine Masquerader, which introduced him to many of his cohorts in the comic book world and helped jump start his career. He worked for Marvel and DC for a number of years until moving to LA in the mid 80’s where he branched out into the fields of animation, advertising and film. He has produced artwork for the LA Museum of Tolerance, has drawn the entire run of cover inserts for the HBO Tales from the Crypt series, won an Emmy as a director on the HBO animated series Spawn. Besides any number of advertising projects he has done storyboards for a number of music videos for the like of Emimem, Marilyn Manson and Gwen Stefani. Most recently Mike has storyboarded The Lion, the Witch and the Wardrobe, Prince Caspian, Voyage of the Dawntreader and Journey to the Center of the Earth.
In his spare time Voz continues to attend weekly figure drawing courses, still shoots baskets in his back yard and continues to create and produce his own graphic novels, Lori Lovecraft and Retrowood. For more information, visit www.vozart.com.
ABOUT DANIEL COREY
Daniel Corey is a director, screenwriter, playwright, and novelist. He has authored screenplays, teleplays, stage plays, two comic series, and a novel.
Daniel spent four years as writer in residence with the New York Acting Ensemble, where 10 of his plays were produced, several of which he directed. Titles included JOGGERS, PSYCHE IN A BOX, STAR OF INDIA, and THE WHITE ROOM. Several of his screenplays have ranked in distinguished competitions, including Francis Ford Coppola’s American Zoetrope Screenwriting Competition and the Austin Film Festival Screenplay Contest.
In 2007, Daniel created DANGERKATT CREATIVE STUDIO, a company that serves as an umbrella for all of his creative endeavors. In 2009, DANGERKATT published PROPHET, a graphic novel written by Daniel, with art by Anthony Diecidue. Since then, Daniel and Anthony have worked together to create a new comic series titled MORIARTY, which follows the misadventures of Professor Moriarty, arch-nemesis of Sherlock Holmes. The first issue of MORIARTY was released May 11th, 2011. The first volume collected graphic novel of MORIARTY will be released September 14th, 2011, under the full title MORIARTY: THE DARK CHAMBER. For more information, visit www.professorjamesmoriarty.com
ABOUT ANTHONY DIECIDUE
Anthony Diecidue (dee-ETCh-eh-DOO-eh) was born in Morristown, NJ, and is an alum of the prestigious Joe Kubert School of Cartoon and Graphic Art.
His digital technique has a traditional flare inspired by everything from comic books and animation to concept art.
Anthony’s work includes principal art for Stan Lee and Walt Disney Home Entertainment’s digital motion comic series TIME JUMPER, MORTAL KOMBAT VS. DC COMICS for Midway Games, PROPHET with writer Daniel Corey at DangerKatt Creative Studio and MORIARTY with Daniel Corey for Image Comics.
ABOUT IMAGE COMICS
Image Comics is a comic book and graphic novel publisher founded in 1992 by a collective of best-selling artists. Image has since gone on to become one of the largest comics publishers in the United States. Image currently has five partners: Robert Kirkman, Erik Larsen, Todd McFarlane, Marc Silvestri and Jim Valentino. It consists of five major houses: Todd McFarlane Productions, Top Cow Productions, Shadowline, Skybound and Image Central. Image publishes comics and graphic novels in nearly every genre, sub-genre, and style imaginable. It offers science fiction, romance, horror, crime fiction, historical fiction, humor and more by the finest artists and writers working in the medium today. For more information, visit www.imagecomics.com.