An InvestComics™ Hot Pick continues to sell out! 3rd printing coming up! 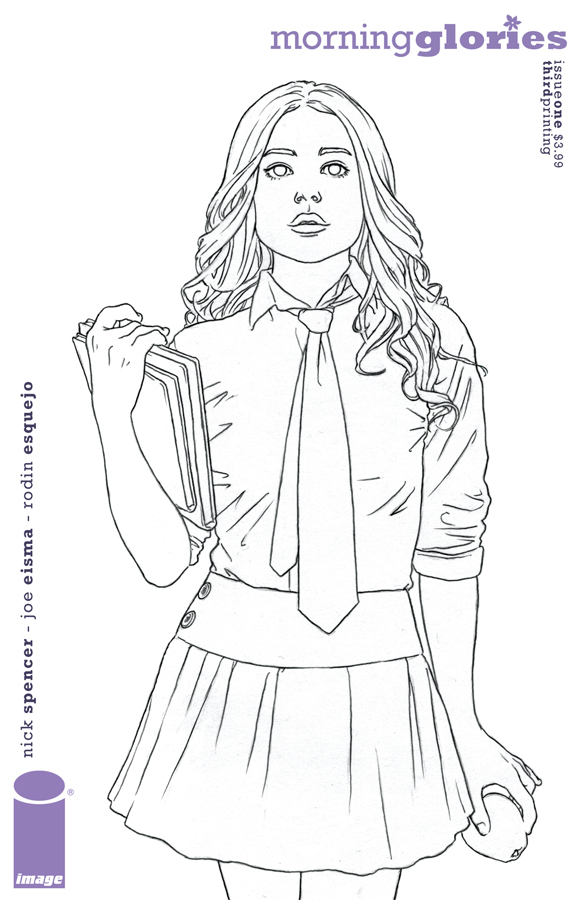 MORNING BREAKS AGAIN
MORNING GLORIES #1 Second Printing sells out at the distribution level on day of release
Berkeley, CA – 1 September 2010 – IGN calls MORNING GLORIES #1 “one of the most engrossing first issues in recent memory,” and the same-day sell out of the second printing only proves their point!
Image Comics is rushing to press a third printing of MORNING GLORIES #1, written by Nick Spencer and drawn by Joe Eisma with covers by Rodin Esquejo. The third printing of MORNING GLORIES #1 will be available the same day as issue #2, September 15.
“We did it again, I can’t believe it!” says Spencer. “Thank you to the fans, to Joe and Rodin for their wonderful work on the book, and thanks to Shadowline and Image for their support of the book. I can’t wait until everyone gets to see more!”
MORNING GLORIES: Morning Glory Academy is one of the most prestigious prep schools in the country. But behind its hallowed doors, something sinister and deadly lurks. When six brilliant but troubled new students arrive, they find themselves trapped and desperately seeking answers in a place where nothing is what it seems to be!
MORNING GLORIES #1 Third Printing (JUL108157), a 44-page full-color comic book for $3.99, will be available September 15, 2010, the same days at MORNING GLORIES #2 (JUL100450).
Image Comics is a comic book and graphic novel publisher founded in 1992 by a collective of best-selling artists. Image has since gone on to become one of the largest comics publishers in the United States. Image currently has five partners: Robert Kirkman, Erik Larsen, Todd McFarlane, Marc Silvestri and Jim Valentino. It consists of five major houses: Todd McFarlane Productions, Top Cow Productions, Shadowline, Skybound and Image Central. Image publishes comics and graphic novels in nearly every genre, sub-genre, and style imaginable. It offers science fiction, romance, horror, crime fiction, historical fiction, humor and more by the finest artists and writers working in the medium today. For more information, visit www.imagecomics.com