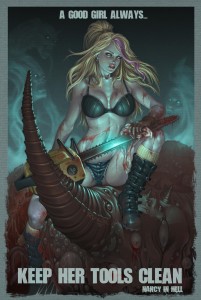 *Nancy Missed Her Period In Hell*

Yes, we were so late finishing this third issue of Nancy in Hell (on Earth). But it wasn’t because we were spending the time on our yacht drinking margaritas. We are working full-time in this series, and this time there are several pages with no text that needed extra artwork on it.

I know. I’m killing Enrique Lorenzana. Every time I came up with a new, horrid idea “Hey, what if we set San Diego in fire and hordes of angels with torches. And I mean hordes!”. And Enrique pulls out his last reserves
of energy, and staggers forward the table. Comics have no budget lines and we can illustrate everything, we have effort lines.

I know I’m killing Fran Gamboa, Sergio and Carmelo, our colorist and color separators. “Hey, let’s make this scene darker but with a brighter side here. Like an Apocalypse Now scene, you know”, I say. And they sigh and
work on the tiny details of every page.

If you open the book, you’ll see the excruciating detail in every panel, “more guts, blood and sliced flesh!” than in any other book. So in issue #3 you have the Celestial Hosts fighting against twelve cons of the Death Row
leaded by Lucifer. Nancy and Pytho as allies. Tits. Guts. Chainsaws. Swords. Demons. Funny lines.

Because Nancy in Hell is a fun series. Fun for us, the ones involved in its creation, and we hope also fun for you, readers and supporters. A grindhouse movie translated to comics, but doing the things that comics can do better than any other media.

So I humbly apologize to our faithful readers for the long wait. Now you have Nancy on the shelves, so tell us if it was worth the effort.
*Read it, have fun!*

The whole world will be annihilated and consumed by Hell. And the Angels want to cut out that cancer… and that means to destroy the Earth. Nancy and Lucifer must join forces with their worst enemy, Mr. Macabre, to stop
Gabrielle… and the nuclear devices she’s ready to detonate.

1 thought on “Nancy Missed Her Period In Hell”