MARKSMAN begins sixty years after the nation’s oil supply has finally run out and debts have been called in, resulting in a civil war that has splintered America into warring fiefdoms. New San Diego is a technocratic utopia that offers the last bastion of peace and prosperity, provided you live within its walls. Drake McCoy is its best protector. McCoy, an expert marksman, defends the city from the numerous threats in the wasteland outside the walls. But when the oil rich Lone Star state sends a powerful army to steal New San Diego’s energy technology, even Drake’s leadership and skill may not be enough to fend off the siege.

This action-packed series contrasts the classic taste of a western against the harsh backdrop of a post-apocalyptic future. With the first issue debuting just in time for San Diego Comic Con, including a SDCC exclusive variant cover, this is one comic you won’t want to miss! Watch as San Diego experiences a battle the likes of which you could never have imagined. 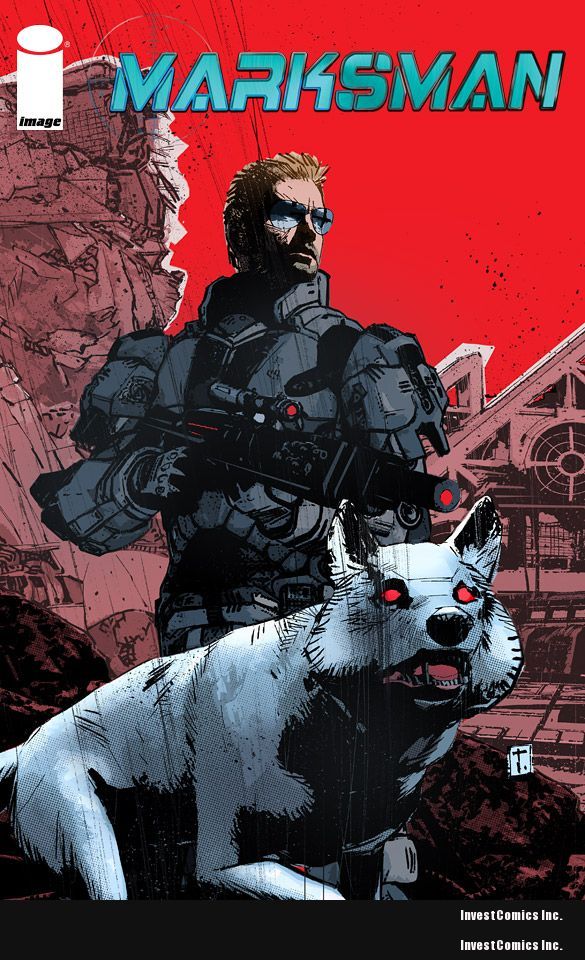 ABOUT DAVE BAXTER
Dave Baxter is a writer/producer whose first feature film, Shooting Lily, won the 1996 SXSW Film Festival. Dave is making his comic book debut with Benaroya Publishing and Image Comics on the title MARKSMAN. Dave is also the recipient of the 2004 Alfred P. Sloan Foundation/Tribeca Film Institute screenwriting grant for two science themed film projects he currently has in development.

ABOUT JAVIER ARANDA
Javier Aranda is a Spanish artist who’s worked with publishers like DC Comics, Marvel, IDW, Devil’s Due Press, Avatar Press, and most recently Image Comics and Benaroya Publishing. He is best known for his work on Star Trek, World Of Dungeons & Dragons, Infinity, Inc., Hellina, and MARKSMAN. Javier has also published several short-stories and collaborated with other artists and writers on several Spanish market magazines, books, storyboards, and merchandising.

ABOUT GARRY LEACH
Garry Leach is a British artist known for his work on MARVELMAN with writer Alan Moore and as one of the founders of Atomeka Press with Dave Elliott. Garry is co-creator of Warpsmith and has worked on titles like Judge Dredd, THE V.C.s, Global Frequency with Warren Ellis, and has illustrated cards for the Magic: The Gathering collectible cards game.

ABOUT TOMM COKER
Tomm Coker has worked on comic book characters ranging from Batman to Wolverine and X-men to Punisher. He’s contributed art to various video games, toy lines, cartoons and film projects. In 2003 he co-wrote and directed his first studio feature (Catacombs) and is now co-writing and illustrating a creator owned book for Image Comics (UNDYING LOVE). Tomm lives in Los Angeles with his wife, daughter, two cats and a dog.

ABOUT BENAROYA PUBLISHING
Founded in 2009 by Michael Benaroya, Benaroya Publishing is a company dedicated to the creation and cultivation of intellectual property by focusing on thrilling and compelling storytelling. Based in Los Angeles, California, Benaroya Publishing launches their debut titles this Spring under the Image Comics label. With David Elliott (FALL OUT TOY WORKS and co-founder of Radical Publishing) at the helm as in-house Editor-in-Chief, Benaroya Publishing promises to bring fresh new ideas, and uniquely told stories to the comics literary world.