Here’s a new article that will be appearing here on a regular basis from Shaun Sorenson. This article will consist of ONE book that Shaun picks from his pile and tells you all why it’s his “Pick of The Week!” Enjoy! 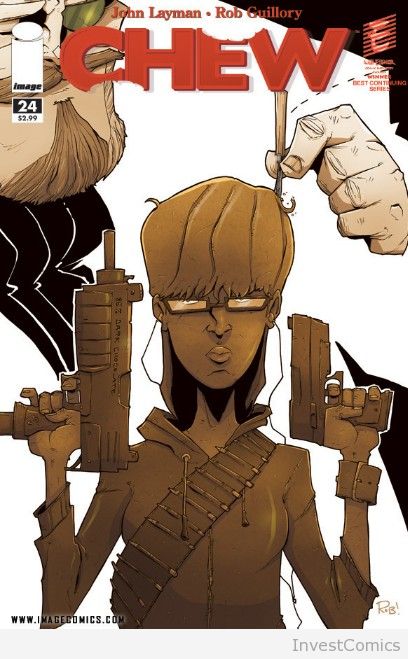 For my first pick of the week I had a real tough choice. In a week where I read 14 comics, a lot for me, I narrowed it down to three books that I thought stood out more than any other. Wolverine and X-men #6, Aquaman #6, and Chew #24. After about ten minutes and flipping through each book a couple times I decided my first ever pick of the week would be Chew #24.

I have been reading Chew since the first issue came out a little over two years ago and have loved every single issue of it. Chew is one of those books that month after month constantly hits the mark. From the very first issue I embraced the universe that John Layman and Rob Guillory had created and have loved every moment of it. The story telling that Layman writes along with the unique art style of Guillory makes for one of the most original comic books out there. Chew is about a man Tony Chu who is Cibopath, a person who can take a bite from any food, person, animal, and so on, and tell what happened to the object.

Chew #24 focuses solely on Tony Chu’s daughter, Olive, who is introduced earlier in the series, but until this issue her life had remained much of mystery.  Olive goes on a mission with Tony’s former partner Mason Savoy and current partner D-Bear to help capture Hershel Brown. Brown is a Xocoscalpere (a man who sculpt anything out of chocolate that can exactly mimic the real version of it). The creativity of Layman to come up with this idea was one of the more amazing ideas that have come out of this series.

This issue really out did itself once again. The story was the first I can remember without it focusing on Tony and while at first I was a little hesitant about not having Tony being the main focal point, after about the first three pages I didn’t care anymore. I found myself just so enthralled in this comic that I forgot about Tony until they showed a panel about what was happening with him in this story arc. Everything that happens with Olive makes you only want more from her character.

The art by Guillory is great as always. One of the great things about Guillory’s art is all the things he puts in the background of the panels. I really don’t know which I laughed at more, the butter sculpture of Butters from South Park or the Robert Kirkman posters in Olive’s bedroom. Guillory’s art catches your eye in this issue just like every other where you just can’t help but look at every panel to try and find every Easter egg he might throw in there.

All of these elements combined for my first ever pick of the week! I’m open to any and all suggestions you guys have to help me along with my new articles. So help me get acclimated and please leave comments/suggestions below.

Also check out a short Interview InvestComics did with Rob Guillory right HERE!