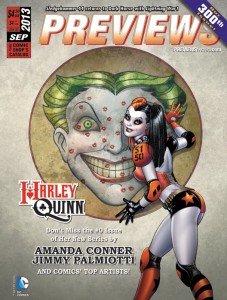 (BALTIMORE, MD)-(August 26, 2013)- PREVIEWS has been the go-to resource for comic book specialty shops and fans to see the newest comics, graphic novels and pop-culture merchandise since October 1988. PREVIEWS is pleased to celebrate its 300th issue with the release of its September, 2013 catalog featuring DC Comics’ Harley Quinn on the cover

“It has been my extreme pleasure and a distinct honor to be a part of PREVIEWS for over 25 years, and I’m proud to say that I’ve been with it since the beginning,” said PREVIEWS editor Marty Grosser. “I’ve seen it grow and evolve from its humble beginnings in 1988, and I can’t wait to see where the future will take us.”

At first, PREVIEWS started off as a small catalog, under 50 pages, featuring new comics from a handful of publishers. As years passed, the catalog grew to over 500 pages, became a full-color publication, added additional magazine features and now showcases thousands of comic book releases, graphic novels, and pop-culture related products.

Each PREVIEWS catalog gives full descriptions for items offered by Diamond Comic Distributors, allowing comic book specialty store owners and their customers the opportunity to get full coverage about merchandise that will be available in two months or more.

“PREVIEWS allows comic fans to get excited about what is trending in the comic world and builds anticipation about what great storylines are coming out next,” said Grosser.

The catalog is broken down into sections featuring upcoming comics followed by sections for Toys, Statues & Models, Books, Games, and Apparel from major publishers such as Dark Horse, DC Comics, IDW Publishing, Image Comics and Marvel Comics. The catalog also has many editorial features for fans to read up on including The GEMs and Featured Items of the month, Splash Page News, Staff Picks, Bestseller Charts, and other articles and interviews.

Each month, PREVIEWS is used as an ordering tool by comic book specialty store owners to help them order the newest merchandise for their stores. Customers and fans can get their own copy of PREVIEWS from their local shop, so they can order their favorite comics, toys, apparel or anything else from the catalog.

The September edition of the PREVIEWS catalog (JUL130001; SRP: $4.99), issue 300, arrives in comic book specialty shops on August 28th, featuring comic and other pop culture merchandise scheduled to go on sale beginning November 2013. Get a copy of PREVIEWS at your local comic shop and view some of the latest releases and merchandise at http://www.previewsworld.com. To find a comic shop near you, visit www.comicshoplocator.com.

ABOUT DIAMOND COMIC DISTRIBUTORS (DCD)—Diamond is at the nexus of comics and pop culture. Based in Baltimore, MD, DCD is the world’s largest distributor of English-language comic books, graphic novels, and related pop-culture merchandise, serving thousands of retailers worldwide. For more information, visit Diamond on the web at www.diamondcomics.com.