BERKELEY, CA — 31 May 2011 – Following the overwhelmingly enthusiastic reception to both Robert Kirkman and Jason Howard’s SUPER DINOSAUR and Mark Andrew Smith and Armand Villavert’s GLADSTONE’S SCHOOL FOR WORLD CONQUERORS, Image Comics has decided to take a chance on significantly overprinting the first issue of its next new all ages title: REED GUNTHER. And because Image is ensuring plenty of copies will be available to reorder after initial orders have been made, REED GUNTHER #1 has not yet sold out!

Image hopes that retailers will take this opportunity to introduce new readers to Shane and Chris Houghton’s charming and colorful yarn by increasing their orders. Although initial orders from retailers are historically lower on new all ages titles than their PG-13 counterparts, the publisher believes the success of SUPER DINOSAUR and GLADSTONE’S SCHOOL FOR WORLD CONQUERORS proves that the comics market is opening up to more diversity in genre and readership. Retailers and fans were already given a glimpse of what sort of hijinks they’ll be in for with Reed and his unruly friends, when a preview of REED GUNTHER was published in the back of SUPER DINOSAUR #2 last week.

Sales and Licensing Coordinator Todd Martinez said, “As the experience of this year’s Free Comic Book Day event once again illustrated, readers want to be introduced to new material, and there are plenty of new readers to reach out to. REED GUNTHER is just the thing to show readers of any age who need a follow-up recommendation after Free Comic Book Day.”

REED GUNTHER is a humorous western tale of hapless cowboy Reed Gunther and his best friend and trusty steed, a no-fooling grizzly bear by the name of Sterling. Readers can soon share in the trouble-making and uproarious fun of the first issue, which includes plenty of close scrapes, a distressingly tough-as-nails damsel, stupid cows, and steak snacking snakes!

Writer Shane Houghton commented, “REED GUNTHER is all about fun. It’s a book about a cowboy that rides a grizzly bear, for pickle’s sake! There’s plenty of dark and serious comics out there, which is totally fine, but we’re hoping folks will enjoy balancing out their gritty and dramatic stories with some fun and goofy cowboy adventures!”

“Some comic book fans may be wary of our series at first because of the stigma that “all ages” really just means “for kids,” artist Chris Houghton added. “Never fear! REED GUNTHER wears it’s “all ages” title with accuracy, and I’m confident fans will respond positively to the series no matter their age.”

REED GUNTHER #1, a 32-page full-color all-ages western comedy for $2.99, will come galloping full speed into a comic store near you on June 1, 2011. For more information on Reed Gunther, Sterling, and all their unruly friends and foes, visit www.reedgunther.com. 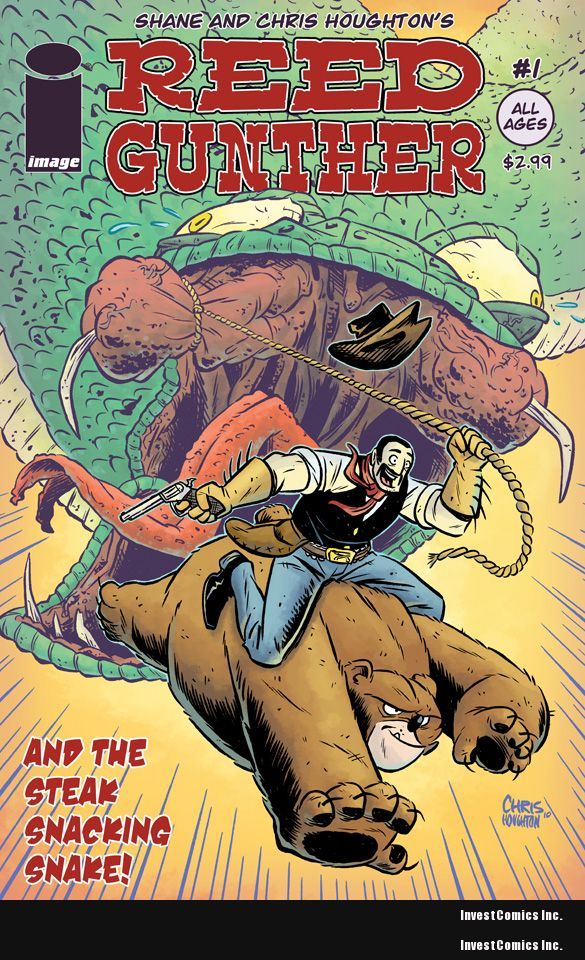